When Woolworth first opened in the UK its largest stores in City Centres were typically three times larger than the branches in small local High Streets. By 1960 the formula had helped the chain to become Britiain and Ireland's biggest.

But after World War II, a new generation of Executives sought to redevelop the brand, building on this dominance. Plans were laid to upgrade from the variety format to become a full size department store. The new generation of superstores would be up to twenty times the size of a typical Woolies, at 140,000 square feet (13,000 m2.)

While they had the cash reserves to purpose-build freehold premises, only time would tell whether shoppers would increase their expenditure at the same rate that the counters were growing, and how they would respond to a broader and more expensive range of merchandise. 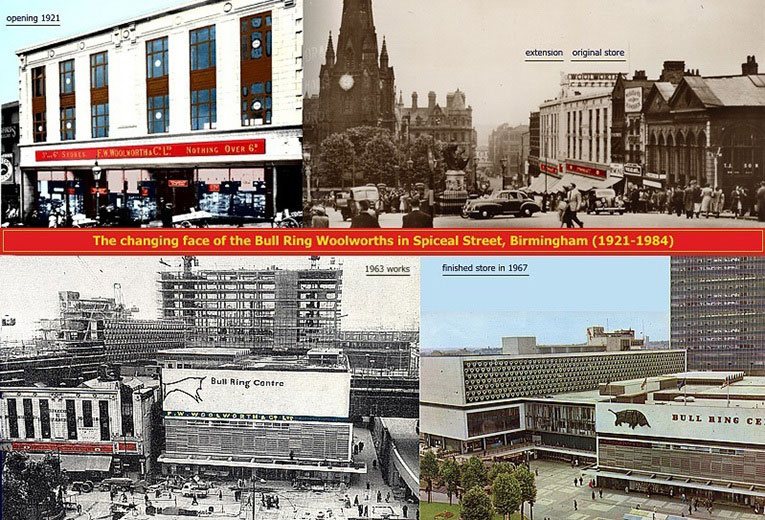 In the 1960s Woolworth aimed to provide a one-stop shop solution for customers in City Centres. A programme was initiated to enlarge and modernise the largest stores to become 'dominant super-class' branches. Many of the buildings had served since before the Great War of 1914-18. They had already been extended in the 1920s and again in the 1930s. The new transformation aimed to make them the largest in town, with a range to rival the major department stores.

The flagship Birmingham store had opened in Spiceal Street adjacent to the Bull Ring Market in 1921. It had doubled in size in the 1930s. Its sales were among the highest in the country. It appeared a prime candidate for extension. In a radical departure the firm established a partnership with a leading builder, and a four year development plan. Woolworth traded some of its land for a large, modern superstore within a new major shopping mall, the Bull Ring Centre. The work was undertaken in stages in a way that allowed the chain to continue trading throughout. Ten months after work started, by Summer 1963 Woolworth had doubled its space to 95,000 square feet (8,826m2), and had halved its footprint by building upwards rather than outwards. Over the next eighteen months the shopping centre, topped by a huge office block, was built in the space that had been released. Woolworth received a proportion of the rental from the development. 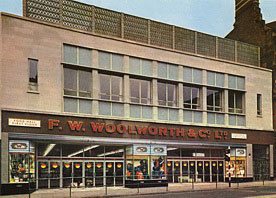 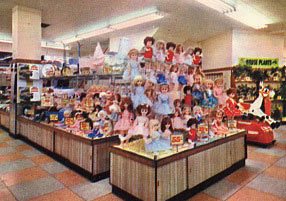 Gallowtree Gate, Leicester was also upgraded without closing. It got a new look inside and out, with new music, soft goods, grocery, fashion and sports counters and a restaurant. It had two large salesfloors, each with a brighly polished terrazzo marble floor in the firm's distinctive pink and grey chessboard pattern. 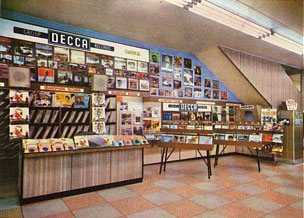 Leicester was the first to get a "modern" record department.  The Company's Annual Report highlighted this as a major step forward:

The gay 'Record Corner' is fully-equipped to meet the demands of the most 'with-it' teenager.

For the first time Woolworth stocked a full top twenty chart of singles and albums by the real artists, along with a back catalogue of classical and instrumental music. The Decca Record Company provided the expertise. 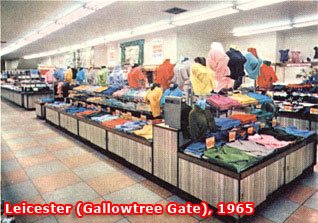 The fashion selection included brightly coloured garments for both adults and children. The new gondola islands included mannequins to show off the clothes.

As with Birmingham, Bull Ring, executives played safe with the traditional trading model rather than taking the opportunity to upgrade to self-service. 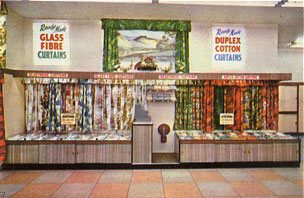 Other innovations included 'glass fibre curtains'. The concept of a plastic, waterproof, wipe-clean shower curtain was brand new, and is said to have drawn on scientific advances made in the Space Race. 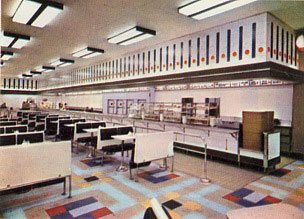 Even the Customer Restaurant on the first floor got a new look, with ship graphics on the walls and a brightly colour isometric floor pattern. 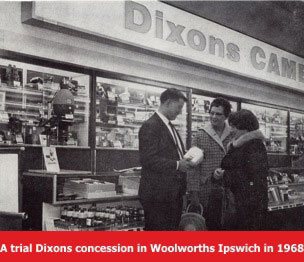 The chain launched a string of experiments to see how far they could go in adopting a department store layout in the City Centres. For example executives invited the small North London photographic retailer, Dixons, to operate a shop-in-a-shop in Carr Street, Ipswich. They also extended the best new ranges from Woolco, including furnishings, white goods and and carpets into those City Centre superstores with sufficient space.

By 1969 when the first man landed on the moon, customers could buy just about anything from a side of beef to a diamanté necklace in Woolworth dominant superclass stores. Most major cities had at least one huge Woolies. The firm had high hopes for the Seventies.