Every retailer relies on its Supply Chain to keep items available, without tying up excessive money in stock. Efficient handling of the goods minimizes cost, improving competitiveness and profit.

As Woolworth stores had grown in size and number, more products had been added across a broader range of categories, each needing to be handled differently. The one-size-fits-all network was no longer fit for purpose. For over sixty years it had operated a warehouse at the LMS (London Midland Steam) St Pancras Goods Station in London, and had shipped all of its merchandise to stores by train, with Carter Paterson's British Road Services carrying it for the last leg from the local station to the store. It was time for a re-think.

The new Supply Chain used computers for the first time, and built a network of warehouses and transhipment centres across the UK. In the 1970s it won awards as "a romance of modern distribution". The warehouses won another world-best award in 2007, just months before the chain was pulled and Woolworths was flushed away.

After computerising in the Sixties, Woolworth turned its attention to its distribution network. It aimed to save money by collating goods centrally and shipping to the stores by road. It hoped that the approach would reduce the number of shipments that suppliers made direct to the stores, and would reduce the amount of money tied up in excess inventory. The strategy also reversed an earlier decision to ship products by rail.

Woolworth had opened its first modern Warehouse in Chicago, Illinois, USA in 1963. The depot pioneered state-of-the-art computer systems for accounting, ordering and inventory management. The idea had been adopted, largely unchanged in Britain at a similar site in Castleton, Rochdale. This was chosen partly because of its railway sidings and railhead loading dock. The chain had distributed goods by rail since before the First World War and appeared unaware that as the 1962 Beeching Report took effect, the country's rail infrastructure would be decimated.

By 1970 the depot was fully operational and serviced 1,100 Woolworth and Woolco stores across the British Isles. It also despatched goods in containers to the 100 branches across Ireland, the Scottish Highlands, the Channel Islands, the Isle of Man and in the Caribbean. Every branch received at least one delivery a fortnight. 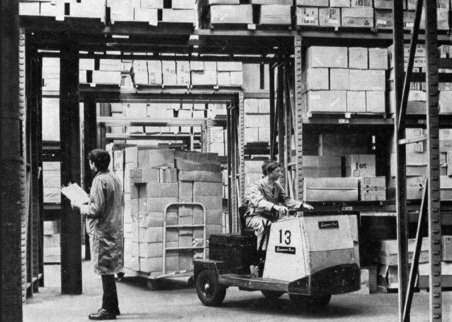 The initial layout of the depot was unusual. It was managed by former store managers, who decided to arrange the storage into individual sections for each branch. These were operated as overflow stockrooms, exactly as if they were above or below a salesfloor.

The approach allowed seasonal goods to be collated and held out of the way until they were needed in-store.

Electric trucks were used to drag pallets around the site. Fork lift equipment was used to put goods away and to lower cases from upper shelving to picking bins where goods were selected into large stock trolleys. 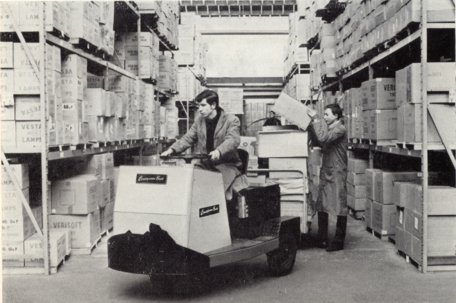 The Warehouse handled about a third of the firm's total throughput of goods. Each year it processed over a billion pounds worth of despatches at today's prices. From the outset it was staffed by local people. 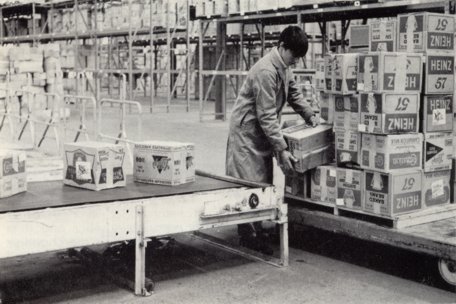 Store orders, topped up by allocations of new items from the chain's buyers, were keyed into a computer in the Administration Block. Twice a day the ICT Mainframe sent batches of picking instructions and delivery notes to large impact printers in the depot, where they were printed on punched and perforated A3 listing paper.

Scanning technology was adopted in 1975 to avoid the need for clerks to transcribe store manual orders.

Goods were picked into stock trolleys. When full these were taken to a central conveyor belt, which carried thousands of boxes through a central gangway in the warehouse. 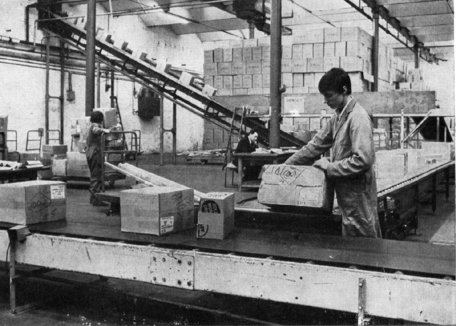 Goods were doubled-checked, with any damage to the boxes made good before being sent up a steep conveyor to the railhead. On the other side of the wall in the top left of the picture, the goods were dropped into railway wagons waiting beneath. A complex network of tracks and sidings was needed to guarantee a steady supply of wagons, marshalled together ready for despatch to different areas of the country.

Despite some of the difficulties with the logistics, rail transport was efficient, cheap and (although not considered at the time) very environmentally friendly. 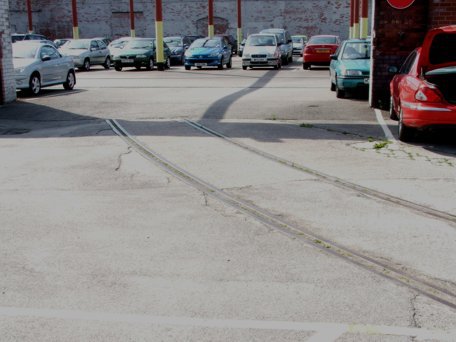 Disaster struck in 1971, when fire ravaged the warehouse. One of its three chambers was destroyed. The other two were severely damaged. The entire reserve stock was lost or damaged. The insurance claim topped £30m, becoming the largest that North West England had ever seen.

The incident was a wake-up call. When it re-opened the plant had become a road depot, and had been fitted with state-of-the-art fire protection. Work was accelerated on a second Distribution Centre in Swindon, Wiltshire.

For forty years traces of the site's rail heritage were visible in the staff car park. Concrete had been cast around the railway tracks, as the vehicles stood in the shell of the original chamber. Today no-one would know there had ever been a depot or a mill in that part of Royle Barn Road. 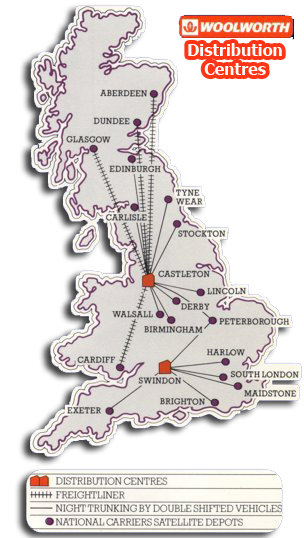 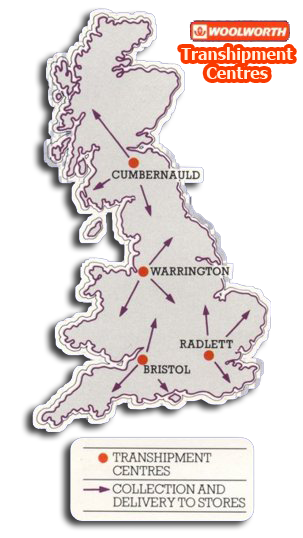 The firm was encouraged by the early success at Castleton and resolved to broaden the network. They launched a search to find a second location and chose Swindon in Wiltshire, which would help them to cover the British Isles more efficiently. It opened in 1972. Freightliner (rail freight) transport was initially used to transfer stock between the two main warehouses, but both progressively switched to road transport for store deliveries. Four additional Transhipment Centres were established to split supplier deliveries and send the products straight on to the shops without storing them away. This approach to supply chain management, which is known as cross-docking, remains a popular practice among retailers and manufacturers in the twenty-first century.

The first stage of the plan was to open a second Distribution Centre in Swindon on a purpose-built greenfield site. The building costs were estimated at a hefty £9.1m, which was paid for on a long-term mortgage. This provided a total of 430,000 square feet (approx 40,000m2) of storage, plus 96,000 square feet (approx 8,900m2) of loading bays and 40,000 square feet (3,700m2) of offices in a three-floor block. The total space was 567,650 square feet (52,600m2). Once the fire restoration of the Castleton Warehouse was completed, the two Distribution Centres worked side-by-side, one serving the north of the mainland, Ireland, the Isle of Man and the Scottish Islands and the other serving the stores across the south and west, the Channel Islands and branches in the Commonwealth.

The site had its own computer room as part of the suite of management offices. The chain opted to choose a mainframe from a new supplier, IBM. As well as running the local warehouse and a new instalment credit operation, the platform provided a recovery and back up site for the main centre at Castleton. 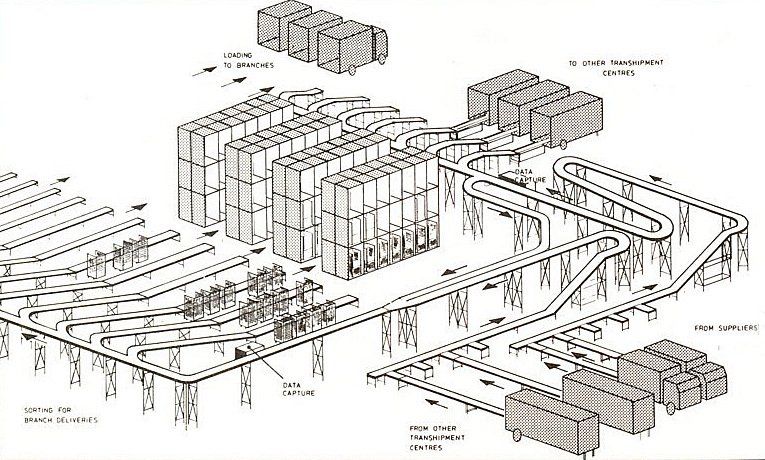 The crowning glory of the distribution strategy was four regional Transhipment Centres in Bristol, Radlett (Hertfordshire), Warrington and Cumbernauld near Glasgow. Unlike the Distribution Centres these were not stockholding locations, simply sorting goods received from suppliers and sending them on to stores within a fortnight. 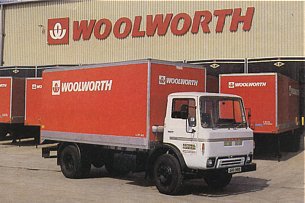 The whole strategy was driven by Woolworth's strong sales of fast moving consumable goods at a time when the stores stocked groceries, toiletries and soap powder. The mass market appeal of these goods provided the throughput to operate the network economically.

The mechanical handling equipment allowed goods to pass through the Transhipment Centres very quickly, making them ideally suited to perishable lines like growing plants - everything from trees and shrubs to bedding plants passed through the centre with a steady flow of lorries from the principal suppliers. 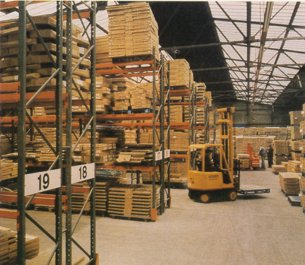 In addition to the Distribution and Transhipment Centres Woolworths also had special distribution arrangements in place for:

Several major suppliers, including Cadbury's, Rowntrees, Mars and Tobler Suchard delivered directly to the stores using their own transport. 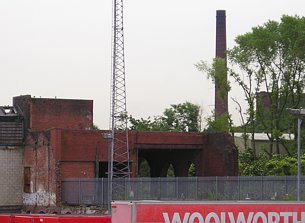 A change of direction in the 1980s rendered some of the infrastructure redundant. As the chain dropped food and fast moving consumable goods the transhipment centres were sold off, with much of their expensive plant and equipment written off. Staff retained their jobs but found themselves working for supermarkets, and doing much more by hand.

In the Eighties the Castleton railhead itself was fenced off but retained as a possible capability for the future. It sat mothballed until the site was torn down to make way for a mixed development of shops and houses in the 2010s, after a tenant could not be found to take on the award-winning distribution centre and office complex.