The modern heart of Woolies

It housed one of the UK's first major computers outside Government and the academic world, automating many tasks previously undertaken by armies of clerks around the country.

The Castleton site soon established itself as the beating heart of the Company, building a team of dedicated professionals who kept the organisation going through thick and thin, while still finding time to make an active contribution to the local community.

In 1967 Woolworth opened a new administrative hub in Castleton near Rochdale, Lancashire, England. The Central Accounting Office had a large distribution depot, offices for accountants and HR, printing facilities and housed a huge super-computer.

The idea was drawn from the US parent company, replacting the successful elements of a site in Chicago, Illinois, and used many of the same systems. 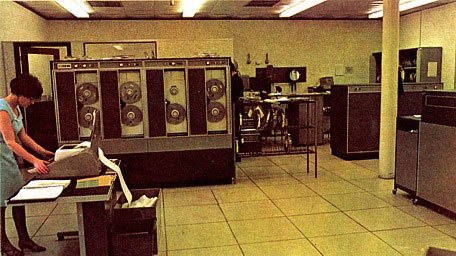 The large air-conditioned computer room housed two I.C.T. mainframe computers, called the 1903 and the 1904. These were able to process many hundreds of instructions every second, and were used mainly to run the Distribution Centre. They also processed store orders, calculated stock control data and were use to reconcile and aggregate the store accounts. 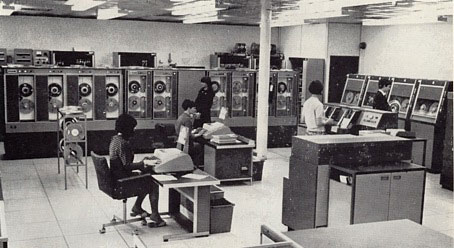 Most staff for the new site were recruited locally. The workforce was supplemented by accountants who had previously worked in the Regional Offices around the country, and by newly recruited IT experts and a number of store managers as a rung on the career ladder. Some of the new recruits were trained as computer operators, others learnt to use comptometer machines.

When the computers were first implemented all input was by punched paper tape. This had to be carefully prepared by punch operators who worked in upstairs offices at Castleton. It was then 'fed in' by computer operators.

In 1967 work commenced to accept input on 40- and then 80-column Punched Cards, which were more flexible and easier to handle than paper tape.

The dream was to scan in printed forms that store colleagues marked up with a felt tip pen. The goal was achieved in 1971. The forms, which were known as 'COS pre-prints', became the backbone of store ordering from 1971 until the late 1980s. They allowed the stores to join the computer age without having to use the machines themselves. 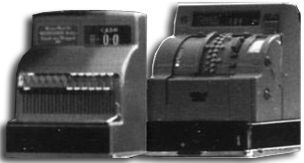 Another early use for the computers was to scan in special till rolls created by the electro-mechanical cash registers of the chain's Woolco out-of-town superstores. These were basic by modern standards, but the central mainframe made it was possible to review store performance by range ("department") each month - allowing the product selection and display layouts to be refined and improved.

The original I. C. T. equipment was rather less powerful than a simple digital watch today. It had about a hundredth of the processing power of a basic 'pay-as-you-go' mobile phone. It was this type of technology that helped Neil Armstrong and Edwin (Buzz) Aldrin to land on the moon, while Michael Collins kept an eye on the console back in orbit.  The guys in the computer room (and indeed the Central Accounting Office) often get forgotten, but frequently hold the mission together!