Woolworth went into the Thirties determined to build on the success of its sixpenny gramophone records.

During the Twenties it had launched tiny Little Marvel and Mimosa Records and sold them by the million, before boosting sales by upgrading to the seven inch Victory label with longer songs and clearer recordings.

Big things were planned for the Thirties, with the launch of Eclipse Records, which were eight inch shellac discs featuring the hits of the day. Each promised two good songs for sixpence.

You can listen to a selection of the songs, or download them for later using our Digital Gramophone. It runs at 78rpm, and you don't even have to wind it up! 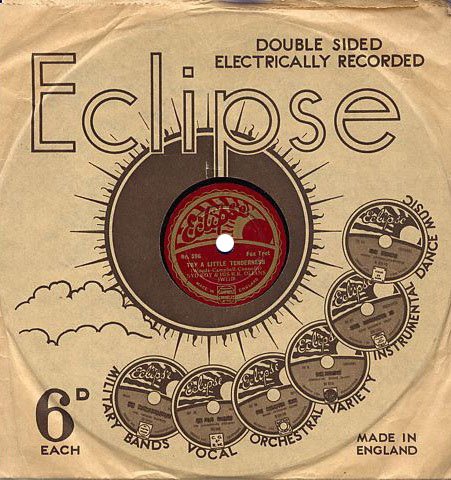 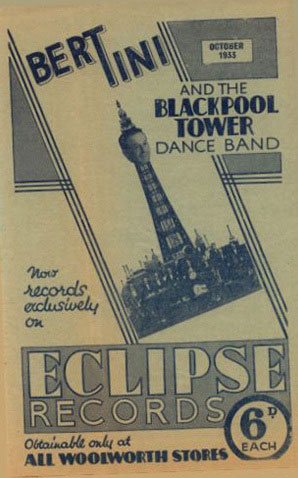 In 1929 a new era was dawning. Woolworth and Crystalate were enjoying great success with 'The Victory' and hoped to build on the momentum in the new decade. Advances in technology meant that it had become possible to make eight inch (20cm) shellac discs more cheaply than the seven inch (17.5cm) Victory discs, giving up to minute more playing time. To mark the upgrade they chose the name 'Eclipse', believing it sounded more modern. Crystalate agreed an exclusive long-term contract to sell only to Woolworth. Following the technique developed for The Victory, the songs were captured electronically in the supplier's studio, where they were then mastered onto metal plates which were used to print the discs. The release schedule was stepped up, so that there would be at least five new records every week. To achieve this some of the best sellers from the early Victory and Mimosa labels were remastered.

Rival stores stocked "Broadcast Long-Playing Records" for one shilling and threepence (approximately 6½p), while Woolworth discs were under half of that price. Eclipse promised two hits per record, one on either side. Many of the songs were by famous artists, recording under a pseudonym. This moonlighting allowed them to make a little extra money outside an exclusive contract with another label. Other discs featured young rising stars. As well as songs, there was dance and military band music, and an ever-changing selection of comedy records, featuring popular BBC radio artists like Philip Ridgeway.

A typical record gave three minutes' playing time. Despite running at 78rpm and using a disposable needle rather than a stylus, the recording quality remains quite credible today, over eighty years after the records first hit the shelves. At the Woolworths Museum we have an built an extensive library. We have picked a few of our own favourites for the juke box, but will do our best to seek out any particular favourites that you remember from shopping at Woolies, or have heard on the radio. Why not drop us a line with your request? 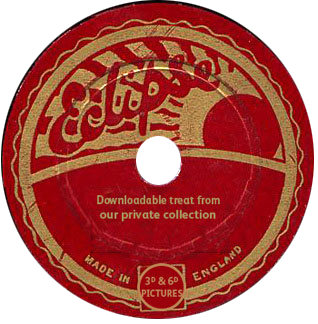 (The page links show below include HTML5 audio with Adobe Flash fallback , requiring an average bandwidth of 2 megabytes. Each includes a download link to save an MP3 copy of the song.

4 My Baby Just Cares For Me

263A Underneath the Arches

306A Don't Go Any Higher Jeremiah

713A Liitle Man you've had a busy day

713B Humming You Glum Times Away

835B Sing the Song of Happiness

845A The Man on the Flying Trapeze 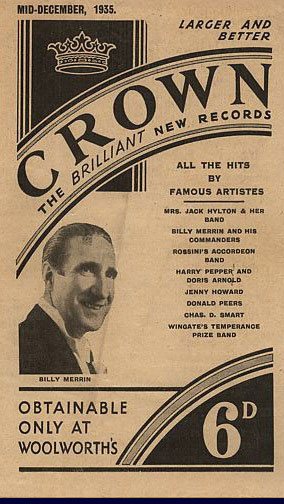 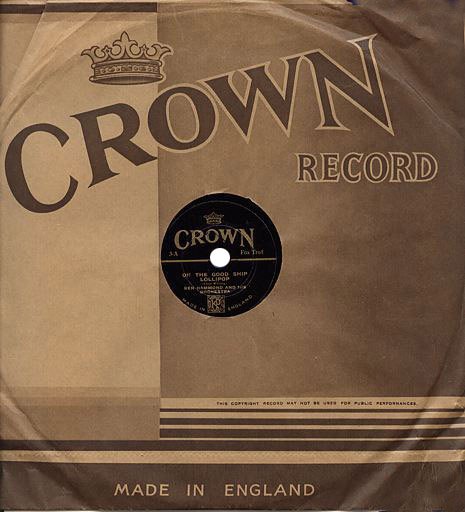 By 1935 Woolworth UK sold millions of Eclipse Records each year, but its margins were being eroded by escalating raw material costs. Something had to be done. Executives worked with Crystalate to find a solution. They came up with an innovative solution, buying new machinery and adopting a new manufacturing process. This allowed cheaper raw materials to be used. Discs were made of a revolutionary plastic called Bakelite in a larger nine inch (22.5cm) format. As well as allowing more playing time, the new material meant that the grooves did not have to be so tightly packed, making the records cheaper to produce. To mark the change, the records were rebranded "Crown", reinstating a marque that Edison Bell had used before the Great War. The label also signed new artists to broaden its appeal.

Store players were upgraded too. Most had been treated to a wind-up gramophone in the early 1920s. The smaller stores were upgraded to electronic "record players", while the largest branches received fully-fledged radiograms to promote the offer. The move sparked a lot of interest among the staff about how the records were made. It spawned an article in the staff magazine, The New Bond, as a reporter visited the factory to describe the manufacturing process*. (*Please note that the linked page includes an embedded audio track*) 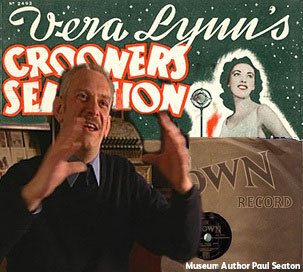 Crown favourites included Mrs. Jack Hylton and her Band (aka Ennis Parkes), Billy Merrin, who was nicknamed the King of the Midlands, and Rossini's Accordion Band. Rossini was actually Harry Bidgood, who also used the pseudonyms Don Porto and Primo Scala to get round a rule that allowed artists only one release a week. He had been Recording Manager for Vocalion, joining Crystalate at the merger in 1926, and played a pivotal role in their success.

Bidgood's biggest signing was Vera Lynn, who appeared, uncredited, on several disc before gaining a Crown byline of her own in 1937. She has spoken of how much she enjoyed working for Crown Record and seeing her records selling for sixpence at Woolworth's. Vera went on to become the Forces' Sweetheart and was appointed a Dame of the British Empire in the 1970s. One of Britain's best loved singers, to date she is the only nonogenarian to top the UK album chart. We're proud to offer two of her earliest recordings for your listening pleasure.

Sadly the gramophone record story of the 1930s did not have a completely happy ending, and goes to show the sacrifices that Woolworth bosses had to make in the last years of the decade. By the Summer of 1937 raw material prices had gone up to such an extent that sixpenny records were no longer profitable. Reluctantly company bosses concluded that they would have to drop the range and offer something else instead. Customers were disappointed but admired the firm's commitment to holding down prices. Amazingly in 1938 the replacement range was .... tinned fruit ... honestly - ain't life a peach? It was to be sixteen years before records returned as a regular range.

(The page links show below include HTML5 audio with Adobe Flash fallback , requiring an average bandwidth of 2 megabytes. All include a link to download the song as an MP3.

1A: Mrs Jack Hylton and her Band - In a Little Gipsy Tea Room

3A: Ben Hammond and his Orch. - On the Good Ship Lollipop

12A: Roy Laroche - Red Sails in the Sunset

31A: The Rythm Rascals - Mickey's Son and Daughter

57A: The Radio Seranaders - Cheek to Cheek

113A: The Rythm Rascals - I've got a Feeling you're Fooling

1351 (Canada/USA): Buddy Blue and His Texans - I Found a Million Dollar Baby (in five and ten cent store)