Over fifty years F.W. Woolworth had expanded and grown to become the market leader. Dominance had been achieved by delivering absolute consistency of operation at over 1,000 locations in High Streets across the British Isles.

Celebrations to mark the 'Golden Jubilee' proved much more controversial in the Boardroom than you might expect, as the ultra-conservative Directors tussled with whether to take a risk or play it safe.

If Frank Woolworth had shown the same reserve back in 1909, there would never have been a British company at all!

Marking 50 years in the British Isles

Woolworth enjoyed a reemarkable period of growth and prosperity during the 1950s, adding 300 stores and doubling the size of many of the original premises. It seemed that whatever the Board turned their minds to blossomed into success, resulting in a big rise in the share price and generous dividends to the investors. To crown the decade plans were laid for big celebrations to mark the Company's Golden Jubilee in 1959. A series of activities and events was scheduled throughout the year, some for customers, some for managers and some for store staff. The key focus was on sales generation, with wall-to-wall press advertising and the chain's first television commercials on ITV. The promotion captured many people's imagination, both inside and outside the company. 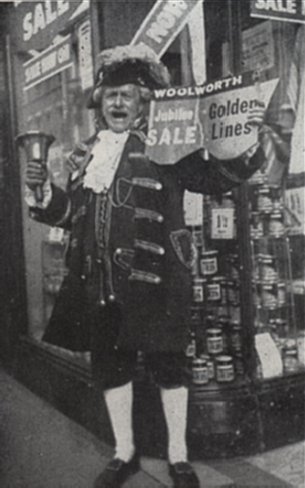 The promotion included deep price cuts, with many popular lines dropped to half price or one-third off for several consecutive weeks. One example was a special on light bulbs and heating products. With so much value to shout about the chain brought out the big guns.

Pictured is the town crier of Preston, Lancashire in his full regalia, promoting the Golden Jubilee sale on the doorstep of the town's Fishergate Woolies. It had been the second to open in the UK in 1910, occupying a prominent position opposite the Town Hall, and had moved to purpose-built premises along the street in 1923, and had served the local community with distinction. 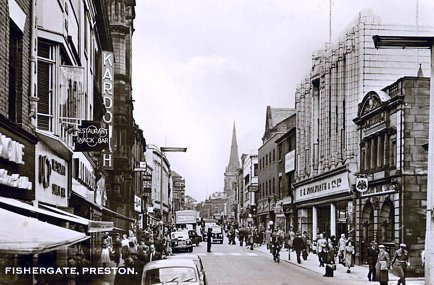 The slogan "Britain's Best Value" took the chain back to its founder's original vision, selling a lot for a little.

Key line prices were cut, some to margins of just 10%. For the approach to work it had to attract extra customers and to get them to trade up to better items. 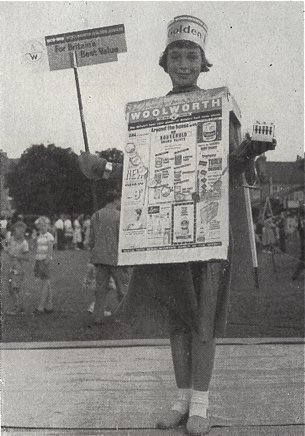 A big sales competition was launched between the stores to see which could achieve the most growth from the new promotional strategy. Prizes were offered for the best sales by area, region and for the country as a whole. There were also awards for getting press coverage for the event. Some of the prizes were for every staff member in the winning store, not just the manager. This helped to engage all of the chain's 75,000 people in the promotion. Everyone embraced the idea with great enthusiasm, and spawned many newsworthy events.

For example, pictured on the right is a full life-size walking advertisement for the sale. Miss June Smith, age 10, was the daughter of the Company's representatiive from National Cash Register ("NCR"). She made several guest appearances in her innovative outfit.

The advertisement that June wore announced that over 85% of the items sold at Woolworth cost less than five shillings (25p), and everything was guaranteed to be good value for money. The same theme featured on a national advertising campaign on 'the ITA' (Britain's network of commercial television stations, which were regulated by the Independent Television Authority). 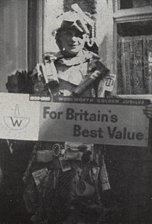 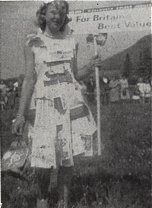 Proving that it pays to advertise, two young customers clearly got the bug. In Ulverston, Cumbria the boy on the left won first prize in the Gosforth Fancy Dress Parade for 1959 clad entirely in Woolworths merchandise, while more than a hundred miles to the south the girl from the Ross-on-Wye (pictured right) chose an outfit of head-to-toe Jubilee advertisements and also walked away with first prize in her town. Both are carrying placards with the jubilee shopping basket logo and the "For Britain's Best Value" slogan. 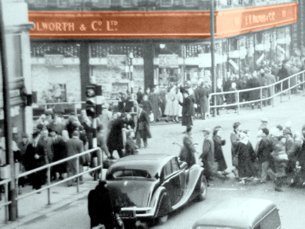 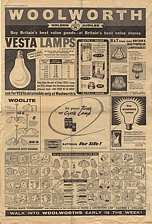 Bolton store (above and left) embraced the sale, setting up bold and impactful displays. For the first time Woolworth had launched an integrated marketing campaign that did not just rely on word-of-mouth and window displays. It included:

Alongside the serious business of selling, the Golden Jubilee provided a great excuse for a knees-up! With the Company right at the top of the stock market and many store managers picking up bonuses that exceeded their salaries, most stores arranged something spectacular in a local hotel and a staff outing to the seaside as well. Where a store had exceeded its sales target the Company made an extra contribution towards the festivities, picking up the full tab for the winning store in each Area and Region . Pictured above are the team from Long Eaton, Nottingham (Store 472 - left) and Tamworth, Staffordshire (Store 508 - right).

Investors and pundits awaited the Annual Report with interest. They wanted to know whether Woolworth's new wall-to-wall advertising and strategy of reducing prices that were already discounted had paid off. 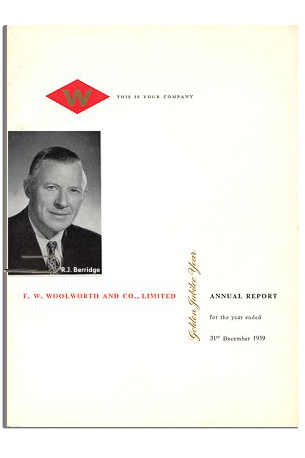 When Chairman R. John Berridge took to the platform at the AGM, he was able to announce a spectacular 20% increase in sales, a £2m (18%) increase in net profit and a £4m (33%) increase in adjusted profit. In addition to the 2s 3d (11p) dividend on each 5/- share (25p) the company announced plans to pay an additional 4d (2p) 'thank you dividend' to mark its fiftieth birthday. As a result each 25p Woolworth share returned more than half of its face value in dividend in 1959 alone.

The results were not achieved by cost-cutting. Berridge also announced that the company had rewired 200 shops for flourescent light and had spent £35m on 250 new stores over the previous five years, all from company reserves without borrowing or cutting the dividend. This had added to the asset base.

Lower prices, higher volumes and an everyday store for everyone. That's was the winning formula otherwise known as the Wonder of Woolworth.