Woolworth's Chief Architect, Harold Wimbourne, oversaw a period of huge expansion for the retailer in the 1950s.

Showing remarkable flight of foot, he deftly navigated the bureaucracy of post-war regulations to re-open the stores destroyed in the Blitz quickly, and to resurrect schemes mothballed from the 1930s.

The pace of openings was breath-taking and left competitors reeling.

Twice around the block

During World War II 26 of the British Woolworth's 767 stores were lost to enemy action and 326 were damaged. Work to repair and reinstate them was delayed until 1948 as the Government focused resources on higher priorities like hospitals, public buildings and new housing. When the restrictions were relaxed most of the rebuilding costs were centrally funded under a national war reparations scheme. It was agreed that, with the exception of a few historic streetscapes, the replacement buildings should be modern and up-to-date rather than simply restoring those that had been lost. To obtain funding designs had to be submitted and agreed both with the local authority and with a central planning team.

The company architect, Harold Winbourne, developed a new look store, and proposed variants of this design for each blitzed location. The new buildings were larger and brighter. Thought went into making them more accessible, with wider entrances and fewer steps.

The latest design and construction techniques were used. When rebuilding started it soon became the talk of the town. Winbourne's design incorporated huge steel girders, which had to be lifted into place by large cranes (below,left), creating the outline of the giant multi-storey buildings long before the outer skin of bricks, glass and concrete was added. 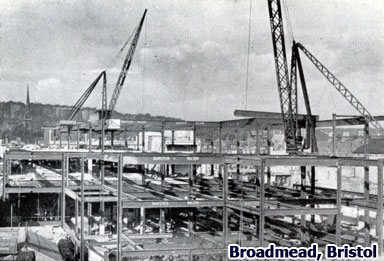 Bright modern materials like stainless steel and marble took the place of the oiled wooden doors and floorboards of earlier years. The upscale new store in Broadmead, Bristol, for example, was very different from the pre-war store, which had been one of the first constructed to chain's own design in 1911.

Following the pattern established during the mass expansion of the 1930s, Woolworth retained its own construction teams, which translated the plans into bricks and mortar. They acquired most of the raw materials locally, and hired sub-contractors as needed. 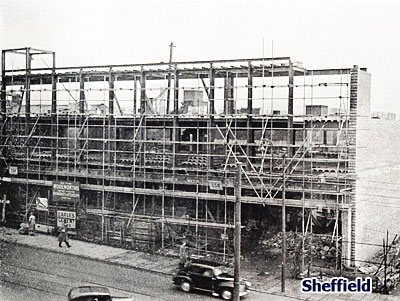 Winbourne hatched a cunning scheme to open each store in stages. This helped to deliver the firm's goal to resume trading as quickly as possible. As soon as the superstructure was complete, there was a big push to create a small salesfloor. This was initially partitioned from the rest of the building, fitted out and then opened for business.

The approach allowed Woolworth to open weeks or even months ahead of its neighbours. This attracted a new, regular clientele.

As customers shopped, behind the scenes work continued on the rest of the building. The completion of each additional section prompted a further reopening ceremony and drew another crowd.

The firm's House Magazine,The New Bond  reported the progress of the reconstruction programme in each issue, showing photographs of the part-built shells as the stores took shape. The staff followed the story with eager interest, keen to know when their stores would also get the "modern Fifties look". Some employees had a more personal reason for keeping up with the story. The firm had a longstanding tradition of showing loyalty to its people. It had retained all of the workers from the blitzed stores and had redeployed them to other branches nearby. Many looked forward to returning 'home' to their own store. For example when Commercial Road, Portsmouth was destroyed, the Woolies workers transferred to the Fratton branch in London Road. Similarly staff from Rampant Horse Street, Norwich worked in the Magdalen Street branch until their store was reinstated. 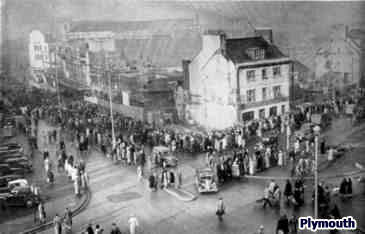 Each re-opening attracted a huge queue. The most spectacular was in Plymouth, where the chain had 'carried on' in the market for almost ten years after its original store was destroyed in a sustained campaign of bombardment by the Luftwaffe.

The replacement was built in New George Street. It opened its doors for the first time on 24 November 1950. The Western Evening Herald reported that the grand opening drew a crowd of over 8,000!

Government building controls were finally dropped in 1954. The chain was ready and had prepared a mass expansion plan under wraps. It and had tested the formula in a handful of towns as work on the reinstatements drew to a close. Profits had never been higher. Some had been retained to build a property bank of development land and options to acquire existing premises from smaller retailers. This gave Woolworth a head start. The plan was executed with such determination that within a year it was able to open two new branches a week.

Without the constraint of a sixpenny maximum, sales rocketed as the Buyers established new ranges of higher-priced goods. Woolworth was able to exploit the import licences that they had obtained before the war at a time when few new ones were being issued. For a spell the stores were the only place where some new ranges were available. The increasingly aspirational range tapped into a new vein of optimism which swept the country, particularly after the Coronation of Queen Elizabeth II. You can see some of the new ranges and fresh retailing ideas in our Virtual Reality tour, which is based on the displays at the Portsmouth superstore in Commercial Road. 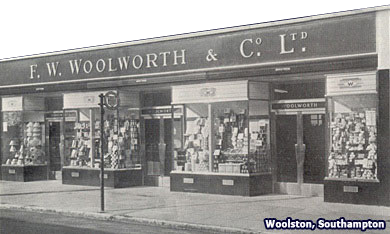 The opening of new Woolworth stores, complete with their art-deco windows and red and gold fascias became a regular occurrence in Britain and Ireland's High Streets as the chain opted to supplement their city centre branches with additional outlets in the suburbs. The Woolston store in Hampshire (pictured right), which opened in 1951, is a typical example of an 'out-of-the-box' store of the period. 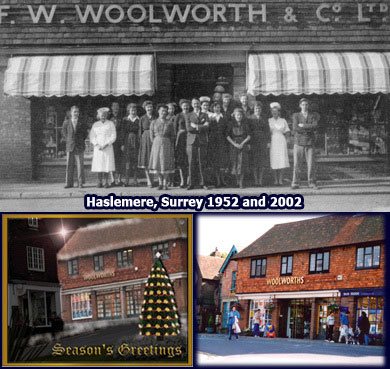 Harold Winbourne, the company architect, showed remarkable stamina. While many of the new stores looked the same, he made it his mission to address any planning challenge with a bespoke design, adjusted to suit the locality. In some cases this involved converting an existing building, like an hotel or a cinema, while in others the new Woolworth was built in different materials to blend in better.

His look for the store in pictureseque Haslemere, Surrey (left) was such a hit that it went on to appear on a number of Company Christmas Cards over the next half-century, and became a particular favourite for more than sixty years. 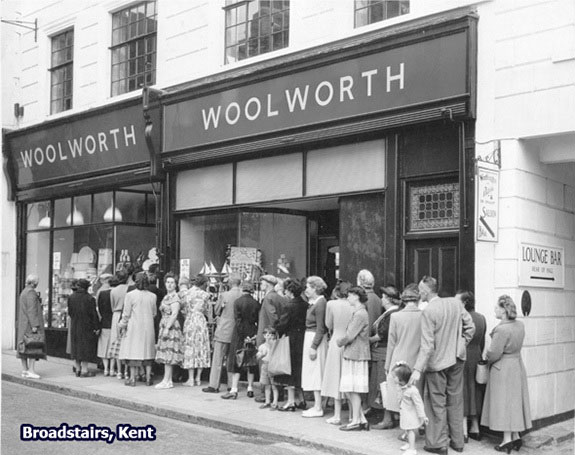 It seems Winbourne knew when to compromise. When a suitable building was offered for sale by a competitor, he jumped at it, and 'tweaked' the strict brand guidelines to open quickly.

For example when the Home and Colonial premises in Broadstairs, Kent became available, a crash conversion was undertaken, resulting in a very different look from usual. Shoppers recognised the 'Woolworth' just as readily as the 'F. W. W. & Co. Ltd.' in other towns, while the property team continued to search for a more permanent home in the resort.

Three years later a larger and more conventional store was developed over the road. Business was transferred on 16 June 1955.

Of all the building schemes over a hundred years in the High Street, none was more ambitious, expensive and controversial than a huge superstore in Cornmarket, Oxford. Woolworth had first opened in the fashionable shopping street in May 1925 and had been a hit right from the start. Throughout term time shoppers found it hard to squeeze into the under-sized store.

As early as 1930 the Real Estate Department had been tasked with finding a replacement and, after much negotiation, had secured the freehold of the Clarendon Hotel, a former coaching inn which had fallen on hard times and was in need of major reconstruction.

Attempts to secure permission to redevelop the site fell on deaf ears before the War, so the Company had sat on the freehold and waited. Initiatives were frozen during the war years, meaning it was 1950 before the scheme resurfaced. Time and again in the early Fifties Oxford City Council turned down Winbourne's designs. Publicly they cited fears that such a large shop would encourage more traffic in a highly congested area. Privately they let slip that they felt that a larger Woolworth would lower the tone and would be ill-suited to the dreaming spires.

This laid the gauntlet and prompted the firm to hire the internationally reputed Scottish architect Sir William Holford to develop a 'Woolworths Worthy of Oxford'. This too was initially rejected, until the Secretary of State, intervened. By the time the building work was complete the man from the ministry, a certain Harold Macmillan, had become the British Prime Minister. 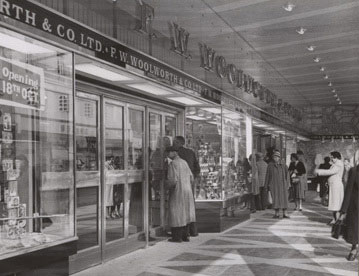 The front elevation was made of local Clipson Stone, Bladon Stone and Grey Slate.

The bright, modern displays saw many new ranges side-by-side with the old faithfuls. The store had a deluxe restaurant and even a multi-storey car park.

To make full use of the space it incorporated a suite of well-appointed offices above, with a spectacular roof garden.

After the opening the Lord Mayor of Oxford was gracious enough to admit to the London Times that the building improved the view from his parlour window! 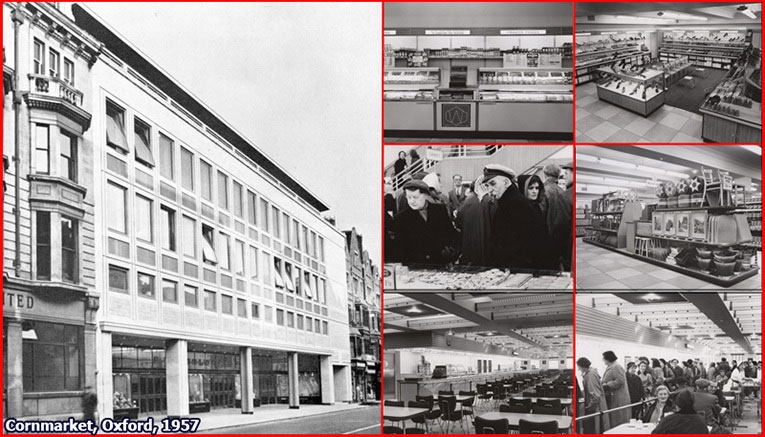 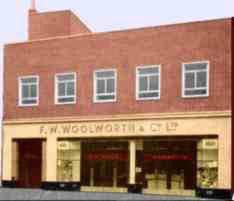 A major milestone was reached on 22 May 1958, when the thousandth store joined the chain. The branch, in the Sussex town of Portslade near Brighton, was one of three hundred added during the decade. In retrospect the opening marked the high point of the chain's success. Profits hit an all-time high as the company's stock stood second on the London Exchange.

Virtually every High Street in Britain and the Republic of Ireland had a Woolworth store, and more than half of the nation shopped there every week.

The Sixties were to prove much tougher, as the Board had to look further afield for continued expansion. As they focused on developing operations in the Commonwealth and a costly venture into out-of-town shopping, the High Street stores lost their sparkle.

While the Portslade store survived to see its sixtieth birthday in 2008 before falling with the rest of the chain, after all the years of planning and the heavy investment in a highly successful store in Oxford, it was one of more than a hundred assets that were summarily sold after the business changed hands in 1982. The elegant building was subdivided, providing a smart home for Littlewoods and a branch of Gap. Today, even Littlewoods has gone, and the only evidence of the Woolworth heritage is an ornate 'W' above the entrance to the suite of offices above the store, which it is said provide an Oxford base for British Nuclear Fuels Ltd.