Maintaining staff morale was essential for the new owners of the British chain as they drove through major changes.

As well as investing heavily in staff training and boosting the pay of those who engaged, they also tapped into the generosity and team spirit of the long-serving staff.

The cynics who despised the 'warm fuzzies' and 'cold pricklies' used in training materials, were won over by community initiatives. Executives wisely used a soft-touch, floating ideas and giving the stores the latitude to develop them locally.

This helped to reinvigorate pride in the brand, empowering people to excel.

Despite the big drive to regenerate and reshape the Woolworths brand during the 1980s, there was still plenty of time for people and fun. The new owners recognised and encouraged the long service and dedication of Woolies people, and launched a series of initiatives to help Managers to develop an external perspective, hone their leadership skills and put something back into the communities served by the stores. This page takew a whistestop tour of some of the activities. 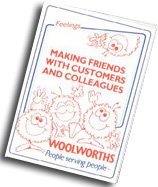 After the takeover there was a major drive to improve customer service, with a change programme that touched everyone in the business, from the stockroom to the boardroom. In a marked change to the management style of earlier years, instead of telling people to give better service, there was a real effort to engage them. HR Director Don Rose evangelised the new approach, explaining to everyone that those who served customers were the most important people in the business, and deserved to be treated with respect. This meant that Managers needed to discuss and agree things with their people in team meetings rather than simply barking orders and shouting a lot.

Over a three year period every Manager attended three five-day courses at Henley Management College. The sessions explored aspects of leadership and team development. The goal was to engineer a move away from the chain's hierarchical 'top-down' culture in which Managers were aloof and simply told their people who to do, in favour of a more collaborative approach fashioned as 'working and winning together'. The programme also marked another departure, breaking down the barrier between office and store-based management. Remarkably the courses were the first time in seventy-five years that Buyers and Planners from Head Office, Accountants and Supply Chain personnel from the Central Accounting Office and the store-based management had ever sat down together and exchanged notes.

Attendees returned to their day-jobs with new skills and materials, and a new perspective to share with their teams. The great majority embraced the concepts, applying enthusiasm and commitment to make change happen and revitalize the business. The training materials were designed to be on the wavelength of the people who would use them, and were light-hearted and funny, despite the serious subject matter. New characters were developed called 'warm fuzzies' (above, left, and below). The creatures gave good service, leaving customers happy and positive. There was also a nemesis, the 'cold prickly', which symbolised the rude and sometimes off-hand behaviour that some perceived to have become a hallmark of Woolworth service at the time. The approach caught the imagination of the younger staff, encouraging some to rethink their attitudes. The training also honoured the good service and attentiveness of many of the chain's longer servers, which helped to keep that important group on-side. Customer surveys soon started to show improvement, particularly for those visiting on Saturday, the busiest day. 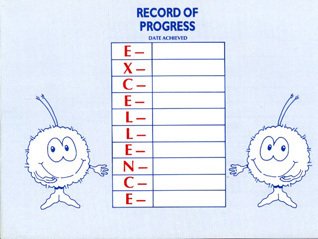 Being polite would not be enough to change customer perception. Shoppers deserved professional answers to any questions about the new product ranges. To achieve this the training introduced 'EXCELLENCE', a broad engagement that encouraged the staff to learn about all areas of their stores' operation, building their pay packets and status in-store as their knowledge grew.

It was divided into two halves. Initially staff learnt about the basics of store operation and the ranges that they worked on. Progress was measured in five stages, building up the letters to spell the word EXCEL, which appeared on name badges. Supervisors and Managers were bonused on the number of colleagues who passed, and were expected to lead from the front, first mastering the test and wearing the badges themselves. 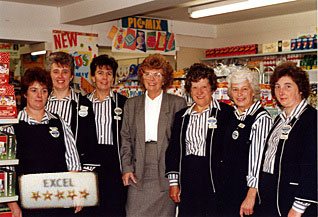 Those staff who passed the test qualified for a pay increment of around 40p per hour, which at the time was around a 15% pay rise. Unlike other aspects of the reward package it was not age dependent, and was therefore particularly appreciated by the Saturday staff, who faced the public on the busiest day.

If they wished, colleagues could then progress from 'EXCEL' to 'EXCELLENCE' by learning about the other products and ranges in the store - the sign of a true all-rounder. They were awarded a further letter each time they passed a test about one of the five ranges that they did not usually work on. A remarkable 3,000 long-serving colleagues took pride in achieving EXCELLENCE status. A number were invited to step up into store management, having showing the resolve that would be needed.

The new investment in people met with approval from commentators and government, boosting the brand's reputation. The Prime Minister, Margaret Thatcher, agreed to endorse Woolworths' Leadership '86, a scheme to identify future leaders in Britain's schools and colleges. Store and Office-based Managers worked with the local Head Teachers to promote a competition and game. The winning children went on to meet the PM for tea at Downing Street. The event provided a photo-opportunity which made that evening's television news bulletins and the following morning's newspapers. Reporters commended the new management for the progress they had made in turning the chain around, noting imrpoved staff confidence and morale as a result of enhanced corporate social responsibility. 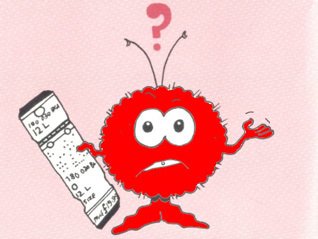 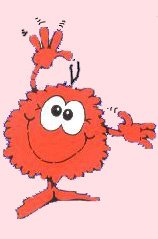 The fuzzies guided almost 30,000 store staff through radical changes to their systems and processes. The creatures evangelised everything from new cash registers to garment wash labels and trade descriptions law. 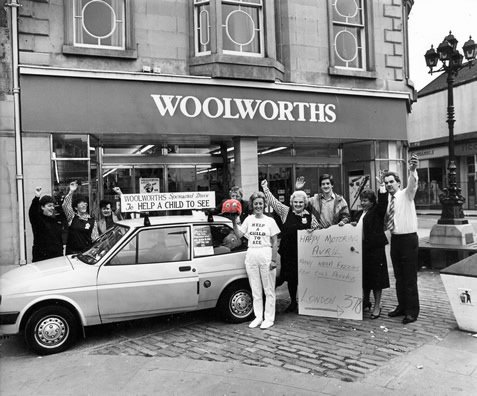 As staff confidence grew their community projects became more ambitious. In the late Eighties one store decided to support the charity 'Help a Child to See' through local fund-raising initiatives. The idea quickly snowballed, with others devising their own events.

For example Lothian Road, Edinburgh, launched a sponsored drive to London and back. Staff waved off the driver, Avril, who had a Warm Fuzzy for company, as she set out on the 774 mile trek. £20,000 was raised, which was later presented to the charity by the popular Cards and Christmas Decorations Buyer, Roger Stafford, at a ceremony in London, which was also attended by the organizers from the store. 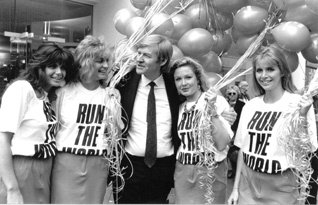 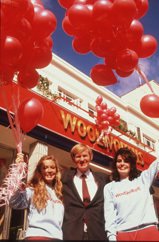 Geoff Mulcahy, encouraged his 'Opcos' to engage with local communities. The CEO believed that 'putting something back' would boost morale and management development. He led from the front, gladly making a fool of himself for charity.

Journalists ribbed him about a snap in which he appeared at the 'run the world' charity event. They noted that the slogan on the t-shirts perfectly summarised Mulcahy's aspiration for his retail empire.

In a brave move, hearing that the supermarkets had shunned the new idea of a 'Red Nose Day', Woolworths stepped up. Its Marketing Director, George Makulski, arranged for the red noses to be sold at all 5,400 tills and got staff to spread the word and launch their own fund-raising events. They excelled, devising all sorts of ways of engaging the public and encouraging donations. Their work was ground-breaking, and has since come to be a hallmark of the event and other telethons like Children in Need. 10 March 1988 had been designated the actual Red Nose Day. It had been chosen as 'the most boring day of the year', according to the organisers. The unsuspecting Makulski was invited to make a guest appearance on the TV telethon, to hand over a giant cheque live on air. No-one knew quite what form the show would take, so Makulski wore his best suit. 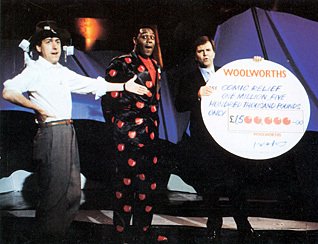 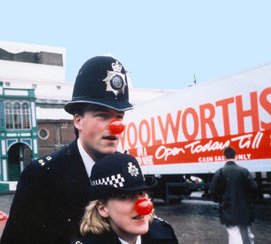 He expected an accolade for a giant, circular cheque for the £1,500,000 that the stores had raised.

Instead the hosts, Lenny Henry and Griff Rhys-Jones, dropped him into the green slime of their gunk tank, to rapturous applause from the studio audience.

Makulski was a good sport about it, but never got his suit clean! 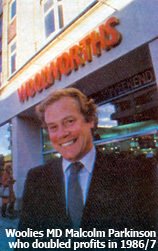 Finally, no review of fun in the Eighties would be complete without a tribute to Malcolm Parkinson, who was appointed MD of Woolworths in 1986 in recognition of his pivotal role in fighting off a hostile bid for the group from Dixons. The former Marketing Director of B&Q proved a highly effective leader, doubling profits in the High Street. Working in great secrecy he planned a celebration to express his appreciation to his 1,200 top people from the offices and stores. All were invited to a conference at the National Exhibition Centre in Birmingham. It began with the regular fayre of speeches and slideshows in a lecture theatre, until at the allotted hour a curtain was raised to reveal a huge funfair dominating the entire exhibition space. Nine hours of revelry were to follow, as all imbibed at the free bar and made merry on the rides and roller coasters, in an event which is still fondly remembered to this day. It established Parkinson as a showman to rival even the mighty Frank Woolworth himself.