It's easy to give money to charity when you're wealthy and swimming in cash, though not every captain of industry is a philanthropist.

It's a whole lot harder to make time for charity work at the end of full-time, physical work for little more than the minimum wage.

Yet for generations Woolies staff established themselves at the heart of the community, laying on parties and events for those less well off than themselves, and raising money for all manner of good causes.

This commitment was reflected in a new mission statement in 1998, and in the words and deeds of many of the 30,000 staff throughout the decade, and right up to the last day in the High Street.

This page remembers some of the happier times of the 1990s.

The Lighter Side on the Nineties 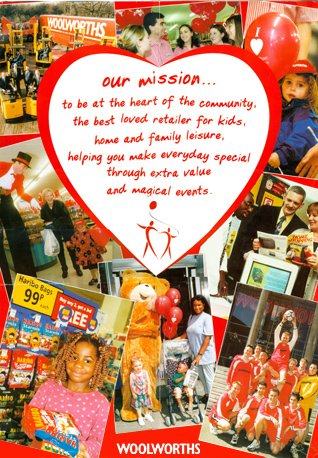 'Our mission ... to be at the heart of the community, the best loved retailer for kids, home and family leisure, helping you make everyday special through extra value and magical events'

In 1998 Kingfisher's rising star executive, Roger Holmes, became MD at Woolworths. He had spent a year preparing for the role, learning from the much-loved veteran, Roger Jones. Holmes aimed to harness the strengths and prepare Woolworths for the Third Millennium. In keeping with the latest management science, he started by summarising of the purpose and goals into an updated 'Mission Statement'.

As well as outlining the key ranges, it also recognised the strong links which the stores had established with local communities, and the unsung good works that staff did in their home towns. Most initiatives revolved around children.

Holmes celebrated the staff's achievement, with a new registered charity called Woolworths Kids First. The Company took on the co-ordination of their efforts, and supported those who wanted to put something back. From a standing start in just eighteen months, in 2000 the charity reached a major milestone as it launched its two thousandth initiative.

Large stores created 'magical events', wowing shoppers with celebrities, fashion shows and even swap-shop events on Saturdays and in the school holidays. Buyers developed extra value offers. The initiative harnessed the enthusiasm of the staff and strengthened their pride in the brand. 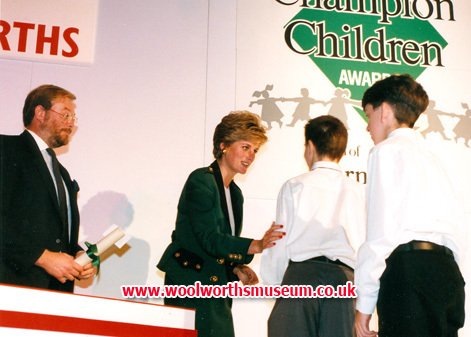 The mission statement capitalised on a series of Kids-related events throughout the 1990s. The Company had sponsored the Barnado's Champion Children Awards, as well as initiatives to support Childline, and Help a Child to See.

The initiatives had already established strong links between many stores and their local communities. Many colleagues gave time rather than money.

The external perspective also helped the Store Managers to develop their leadership skills and proved an effective way of improving teamwork in the stores. 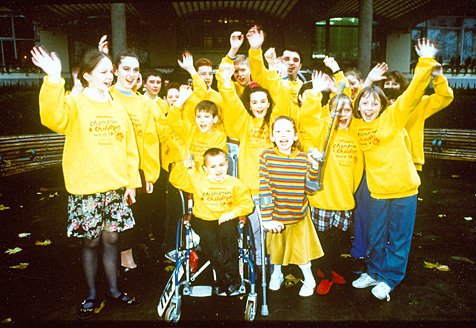 The initiatives also brought another benefit. They opened Managers' eyes to some of the issues facing the disabled. One came up with an initiative that proved that it was possible to make a big difference at negligible cost.

Spotting the difficulty that some people had in navigating the aisles of his store, he suggested that each branch should be sent a plank of wood the width of a double-buggy or a motorised scooter for the disabled. He got fellow Managers to walk their stores with the plank to spot and tackle bottlenecks in-store.

The idea effected more of a change than the subsequent Disability Discrimination Act, because it was simple and practical. 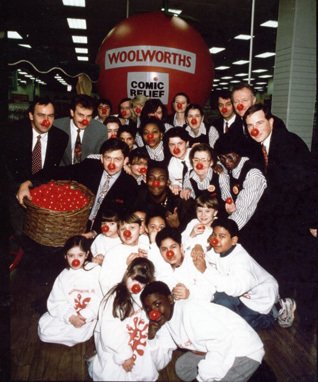 Woolworths supported Comic Relief for much of the 1990s, becoming the main outlet for Red Noses and raising money through the stores. Company Directors entered into the spirit of the event, with no less than five (Chris Ash, Don Sloan, Dan Bernard, Martin Toogood and Jim Glover) volunteering for a photocall with Lenny Henry and Peter Taylor and his staff in the Edgware Road store near the Marylebone headquarters in London.

The firm stepped aside in favour of the supermarkets when Kids First was adopted as the dedicated company charity. 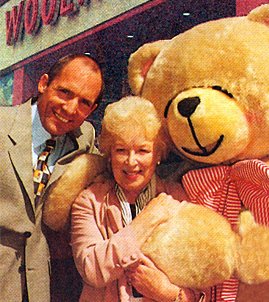 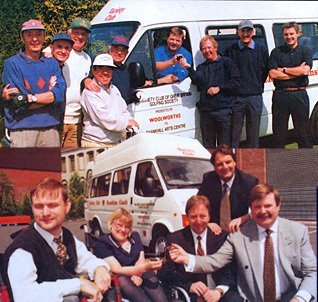 The Variety Club's Sunshine Coaches caught the imagination of Woolworths' golfers. A group led by Distribution Director James Spittle, raised funds to hand over one minibus to Ronnie Corbett and Tim Brooke-Taylor and another to the Shankhill Arts Centre. 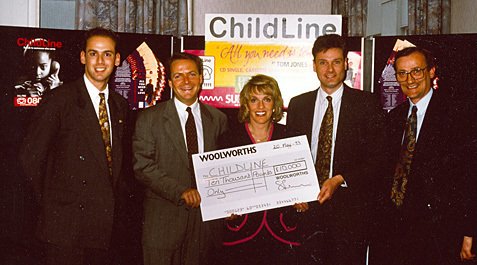 Store staff were so moved by That's Life star Esther Rantzen's campaign to protect children from bullying and abuse at home, that they encouraged Company bosses to donate £10,000 to help get the new service off the ground. HR Manager Ian Woodward handed over the giant cheque, accompanied by members of Andy Baines' Marketing Team. 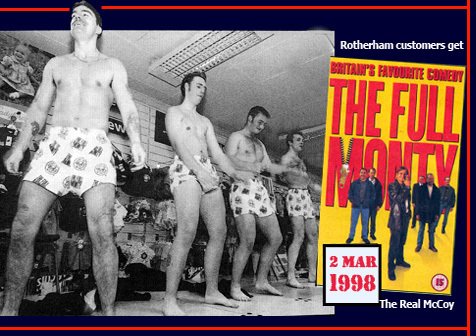 Altogether raunchier was a floor show at the Rotherham store to mark the release on video of the smash-hit film 'The Full Monty'. In keeping with the plot, in which redundant steel workers find an unusual way to make a living after their plant closes, a popular local group of male strippers 'The Real McCoy' were hired to strip to their 'Full Monty' boxer shorts for the benefit of a packed store of shoppers. The event was broadcast on BBC TV's Look North and received extensive national media coverage.

The scantily clad performers went on to carry two sales assistants shoulder-high around the store to rapturous applause from the crowd! Buoyed by the event, the store sold a remarkable £80,000 worth of the £9.99 video over the following week, along with 3,000 copies of a 'perfect partner' film for £2. 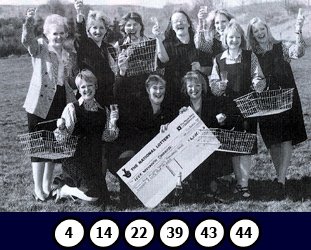 Perhaps the most remarkable story of the 1990s was news in Spring 1998 that a syndicate of fourteen colleagues had won the £4m jackpot in the National Lottery. Each took home a jaw-dropping £287,211.

The red top press dubbed the win 'The Wonga of Woolies' and reported that everyone planned to stay working in the store. The Assistant Manager, John Roberts, explained to the house paper, Woolworths News, 'at the moment everyone's staying at the store... we're that close, everyone gets on so well. It's almost like a family runs the store.'

Sales Assistant Eileen Holland, who had served for 23 years, told The Sun 'Woolworths has become part of my life. We're like one big happy family. Even shoppers are coming up to congratulate us'. 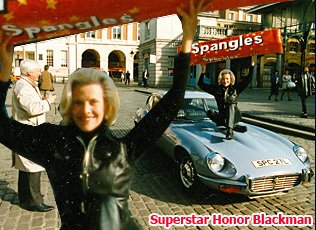 As the largest confectioner in Europe, the stores were often chosen to launch new sweet brands. The Buyer was also able to persuade suppliers to restore several favourites to the shelves. According to press reports it 'forced' Cadbury's to reinstate Bournville Boxed Chocolates, alongside its new Biarritz brand. Terry's agreed to supply Devon Milk in half pound (227g) and pound (454g) boxes. Mars relaunched the sixties favourite, Spangles, at Woolworths with panache. The supplier hired popular Bond-girl and TV star Honor Blackman for a photocall. She posed, Spangles aloft, on the bonnet of an e-type Jaguar in London's Covent Garden.

The long-serving Trading Controller Chris Willis, the man behind the continued success of the sweets offer, also played a part in getting Mars to make Ice Cream, which soon became an international best seller. But even he couldn't rename Snickers as Marathon or M&Ms as Revels and Treats ! 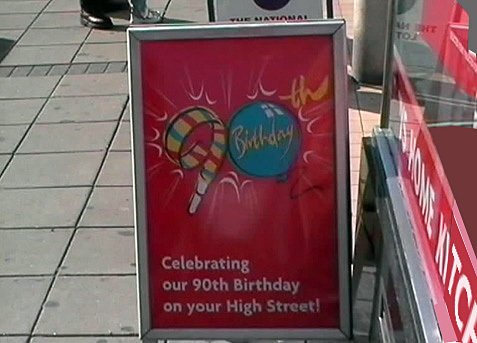 With a new mission, Kids First's 2,000 community-based projects, and a renewed programme of store openings, including the first new London store for twenty years, the Company allowed itself a moment of reflection and a sign or two 'celebrating our 90th birthday on your High Street'.

Woolworths went into the millennium walking tall, generating more than £100m a year in profit and confident of a rosy future. No-one knew that, less than ten years later, as the hundredth birthday festivities were about to get underway, it would all be gone and the firm would 'ascend' to become a world-class website as part of the Shop Direct Group. What a difference a decade makes.