The bigger the better

To maximise shareholder value large companies have to keep up with the latest thinking about corporate strategy.

For most of their first fifteen years Kingfisher (née Woolworth Holdings plc) proved adept at pleasing City Editors and pundits, keeping up with the latest dogma and putting it into effect.

In the 1990s it was widely believed that to prosper in the long term companies had to grow ever larger, on the principle that you either take over other businesses or become increasingly vulnerable to being taken over yourself.

With a stable of mature businesses in the UK, Executives could afford to risk some experimental ventures, like a partnership with Next to form Time Retail Finance, and a dalliance with video rental in acquiring and developing the Titles brand. But they also cast the net wider, opening B&Q stores in China, and taking a stake in the similar company, Castorama, in France and buying the French electrical giant, Darty, outright.

As the 1990s continued this acquisitive strategy won approval from the experts, and saw a seemingly never-ending round of non-disclosure agreements and talks about possible mergers and takeovers.

But, just as quickly as this diversification had become fashionable, the trend switched towards disposing of non-core assets in order to minimise debt. By the early 2000s Kingfisher had disposed of much of the empire which it had built so meticulously, selling a number of the businesses cheaply, to become a specialist DIY retailer.

Kingfisher's 'Talks about Talks' in the 1990s 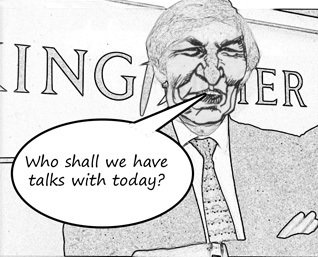 Between 1982 and 1999 the one-time F. W. Woolworth was transformed into a large international group of companies. From the outset of Kingfisher's ownership of the business there were acquisitions and disposals, with Woolco, Shoppers World and Furniture World and many of the largest Woolworth stores sacrificied in favour of B&Q supercentres and the purchase of Comet. As the Group grew in stature much of the growth was organic, allowing new businesses to be purchased from cash reserves - particularly as the Kingfisher share price rocketed.

Some new acquisitions - like the Share and Tip-Top Chains of Chemists - were absorbed into existing brands, with established names like Lasky's vanishing as part of Comet. Some prospered while others proved more difficult. For example Charlie Brown Autocentres faded away. Similarly Kingfisher chose to sell their joint venture interest in the American office supplies company Staples new start in Britain after providing a number of the properties as B&Q expanded into larger purpose-built buildings.

During the 1990s, the pace heated up with France's leading electrical retailer, Darty, joining the fold, closely followed by a string of European businesses including Dubois, Reno Depot, Brico Dept, BUT, NOMI, Vanden Borre and ProMarkt. A 50% stake in France's largest and most successful DIY Chain, Castorama, proved a particular challenge, with the joint venture with the original owners proving more difficult than anticipated as their culture clashed with B&Q.

In parallel there were a number of British High Street based initiatives which ultimately came to nothing. The highly-publicised takeover tussles with Dixons (today's DSGi), with both bid and counter-bid during the Eighties, made way for more professional negotiations conducted behind the scenes, normally strictly controlled by confidentiality agreements. However it proved hard to keep some of these exploratory talks a secret, with some suspecting that journalists kept a close eye on the comings and goings at Kingfisher's Headquarters in North West House, across the Marylebone Road from their Woolworths subsidiary. Throughout the Nineties the papers were rife with speculation about who might be the next target for the highly acquisitive Group.

Speculation over time suggested that Mulcahy and his team came close to buying Littlewoods Stores from the original owners the Moores Family, in a deal that would have broken the Fashion stores away from their retail subsidiary, Index Catalogue Stores, and their successful mail order and football pools businesses. It is said that after all of the preparation work was complete, (known as 'due diligence') the deal foundered not on the commercial terms, but because the leaders of the two businesses found that they just didn't get along. It is said that the plan involved merging Littlewoods into Woolworths, losing the brand name but retaining the stores, which would have helped Woolies to regain a foothold in some of the large Cities abandonned during the 1980s.

In some ways more surprising was intense speculation that Kingfisher intended to buy Marks and Spencer, at a point when the retailer was struggling with a modernisation programme and had problems with overseas acquisitions in France and America. It is unknown whether such speculation was true, but remarkable for the impact that the media coverage had on the share prices and morale at both companies.

Sir Geoffrey (who firmly believed the retail theory that consolidation would mean that ultimately only a handful of super-large, super-efficient companies would survive, while all the rest would merge or die) still had the biggest deal of all up his sleeve. In the late 1990s he formed a plan to catapult Kingfisher into the retail superleague by merging the General Merchandise Division with Asda. This is covered in a separate exhibit, here in the Woolworths Museum.