In the late 1950s F.W. Woolworth was the largest retailer in the world, with over 5,000 shops across the globe.

In 1959 its leader, Robert C. Kirkwood, challenged his British Board to follow his lead, as North American stores moved into Malls, new larger format Woolcos oepend and he bought new businesses.

In retrospect these moves marked the beginning of the end for the US red-fronts, and arguably hastened the demise in Britain too. Returns were insufficient to pay down the set-up costs, leaving Woolworth fighting for investment against younger siblings.

Kirkwood's successors proved adept at developing pop-up shop chains, and built the Athletic Shoe brand, Footlocker into an enviable business. But, after the closure of Woolco, Woolworth was severely weakened, and they struggled to reinvent it.

Retrenchment became the order of the day, as waves of stores were closed as their leases expired. Only in the mid 1990s, after the store estate had been decimated, did Executives find a profitable formula after trials in Delaware, but even this could not match the returns from the newer brands.

With heavy hearts, rather than allow Woolworth to wither and die and be remembered as a failure, the Board resolved to "retire the brand". An orderly shutdown would allow those Associates not moving to another fascia to leave with heads held high.

At the time staff in the UK thought this was dreadful, little knowing how much better it was than the events that were to befall them just eleven years later.

Farewell to an old friend

At the time of its 100th birthday celebrations in June 1979, F. W. Woolworth Co. appeared confident about the future, despite a number of pent-up problems. A vigorous defence, promising good times ahead, saved the giant from a takeover by Canada's Brascan Corporation. Yet just three years later the wonder-child British subsidiary was sold off cheaply and, as this page explains, within 18 years the 5 & 10¢ had vanished from the Main Streets and Malls of the USA and Canada.

After the festivities, it emerged that Woolworth's expansion schemes from the 1960s had come back to haunt it. Back then it had gone on a spending spree, buying fashion and manufacturing businesses, upsizing and relocating many Woolworth outlets and establishing Woolco out-of-town. It had taken on debt assuming that the new enterprises would become profitable over time, allowing bonds to be redeemed at the end of thirty or forty year terms. But despite early success none had hit its target, leaving a big cash shortfall at a time when the coffers were empty.

In the 1980s radical action was required to remain solvent, forcing the disposal of the British subsidiary, raising $560m (£330m), and the decision to close every Woolco store in the USA, selling the freehold and leasehold real estate wherever possible. The move was blamed on poor trading during the recession. The Canadian stores survived and initially continued to prosper.

As Woolworth executives declared that there was no profit to be made out-of-town, another retailer, Wal*mart was growing rapidly. It picked over the bones of Woolco US, turning many cows' ears into silk purses. Later, in 1995 it took over the majority of the Canadian Woolcos as the 5 & 10¢ imploded.

After the sell-offs, during the 1980s the North American management worked to reinvent the Corporation, paying down debt and redeploying assets to build their newer fashion, apparel and footwear brands. They enjoyed the greatest success with Footlocker, which continues to prosper to this day. 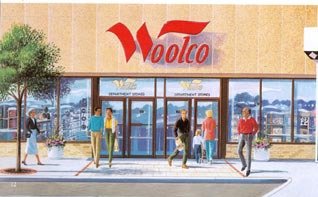 The loss of the American Woolcos gave logistical problems. The supply chain and the Woolworth store base had been shaped around the superstores. Now swathes of the country had no store, and the remaining 5&10¢s were smaller than they might otherwise have been. Only New York and Florida had a Woolworth in every Main Street. Canada was the exception. Its Woolcos enjoyed a purple period in the 1980s, keeping Woolworth profits up.

But across the border unprofitable and outlying US stores were closed, mainly when their leases came due for renewal. Many had enjoyed fixed rents for a century and could not afford a rise to the market rate. 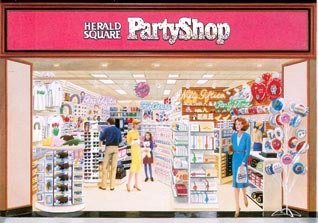 Executives needed to find a new formula to turn the situation around.

As in Britain, attempts were made to make small parts of the Woolworth range stand alone, exemplified by the Herald Square Party Shop, a tribute to the F. W. Woolworth Company's long-lived store stationery brand, which had been introduced by the Founder himself. 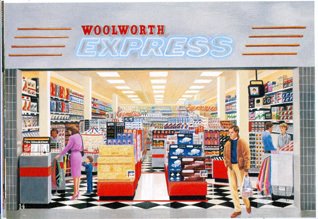 A 'Woolworth Express' format offered toiletries, cards, party, stationery, household sundries, holiday and promotional items, in a compact store suitable for a Mall. It was hoped this would replicate the success of the up-and-coming Walgreen chain that had opened in competition.

But ominously the parent company also changed its name from Woolworth Corporation to 'Venator', recognising that only 1,000 out of 9,000 North American stores were operating under the Woolworth fascia. In 1992 it announced 900 store closures, principally from its General Merchandise division. A further 1,000 followed in 1993. 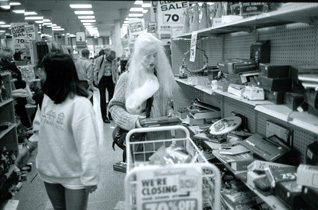 The further wave of closures saw Woolworths consolidated their remaining operations in their two most profitable States - their home base in New York and the holiday state of Florida. There were sad scenes across the remaining states as the five-and-tens sold their remaining products and closed one-by-one. In San Francisco, for example, the landmark store adjacent to the trolley turntable, which had been part of the landscape for generations attracted huge crowds to the closing sale. 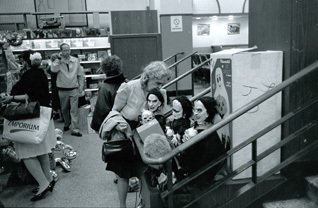 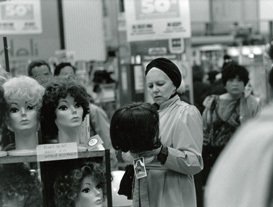 The haunting images of the closures got little exposure in the UK, where the Company operated independently and generated a healthy profit.

But for colleagues in North America and Germany they were much more worrying.

On Thursday July 17, 1997 the world's media carried the sad news that Venator Corporation planned to close the remaining 400 F. W. Woolworth stores, primarily in the State of New York. The British Company was already trading independently, while the German subsidiary was to be sold to its management for a token sum. An independent operation in Mexico City and other freestanding operations were also unaffected. The American Chairman described it as a graceful retirement, with 9,000 grandchildren following in the footsteps of the five and dime. He assured reporters that all associates (employees) would receive generous severance pay and would be provided with outplacement counselling. Wherever possible the stores would transfer to one of Venator's other formats, again principally the Footlocker athletic shoe business. 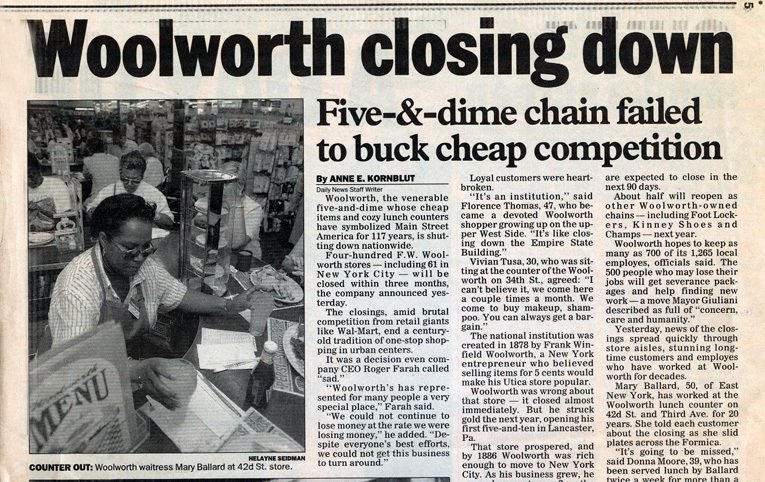 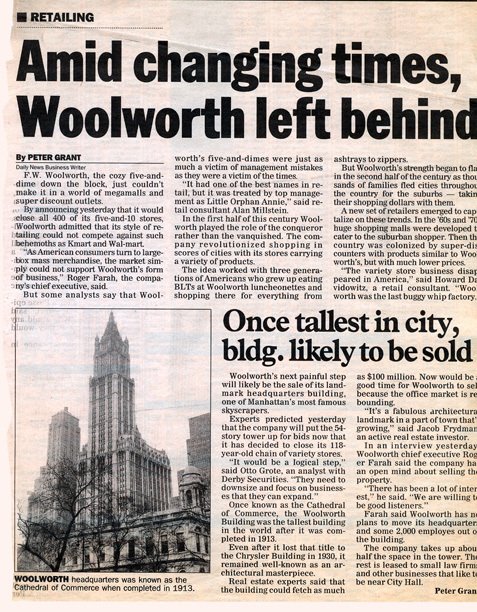 Media coverage about the closures mourned the loss of a national institution and sympathised with associates affected by the closures, noting that for many of them the shutdown was like losing a close family member.

Editorial comment noted that the Company had failed to keep up with the modern age, and that management had been careful to close the chain with dignity and to 'care for' their employees through a painful period.

Newspapers noted that many members of the public, as well as rival traders had purchased fixtures, signs and memorabilia. Soda Bars and fascia signs had been snapped up by lovers of nostalgia. 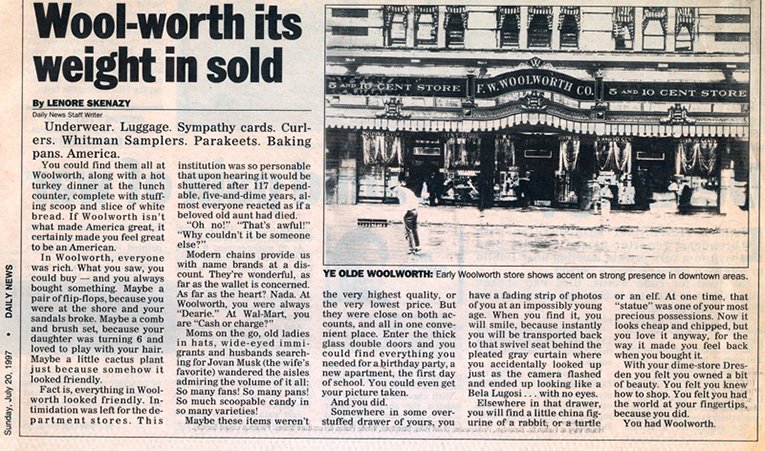 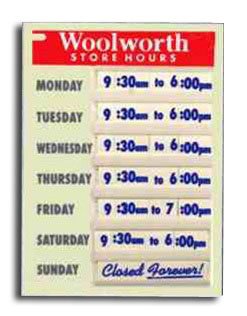 Shortly after the closures, in an in-depth interview with Edmund Mander, Executive Editor of Shopping Centres Today , the Venator Chairman Roger N. Farah explained the difficult decision to close.

"Woolworth had some strengths and had some areas that we needed to work on. It had a loyal following of very dedicated employees. It had a history of migrating from a primarily general merchandising business into the beginning of a specialty store business," he explained.

Mander asked "Coming back home, in 1996 you were repositioning and remodelling the Woolworth stores, and then you suddenly turned around and closed them. Why this sudden turnabout?" Farah replied that the company had already declined from thousands of stores to 400. He built three concept stores in Delaware. "I think we learned a lot .. and found the customers enthusiastic. But we found the cost to rebuild all 400 stores and expand to a chain of significant size ... it didn't make sense to put more money into trying to fix it when the alternative was the athletic ... business."

"Was it a difficult decision? After all Woolworth has been an American icon."  "It was difficult on two levels ... the public ... and ... it affects lots of people. The question was do we continue to support a business that is losing money and risk the future of the rest of the corporation?  Or do we try to make the right business decision, try to handle it in the best way we can and try to treat people as fairly as we can and move forward." 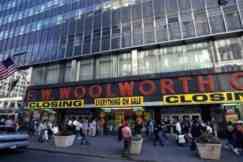 Farah said that the stores would begin liquidating items as soon as the following week.  The stores were expected to close in 90 days.

Not only the merchandise but the fixtures and fittings - store front signs, price tickets, counters, soda fountains and lunch counters. All were to be sold. 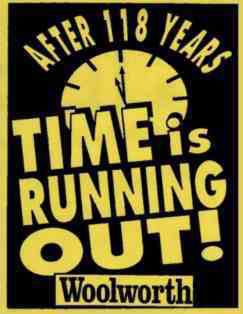 One Associate wrote in 2004 to tell the Woolworths Museum of his last day with the business.  He was Manager of one of the New York stores.  To avoid embarrassing him we have omitted his name.

"At six o'clock on Saturday we closed the doors, the remaining fixtures and remnants had been packed up and shipped out.  My son, who worked in the store, and I sat in the middle of the floor.  You might expect someone from Executive Office to come and say goodbye.  But all we got was a reply-paid envelope asking us to mail the keys back to the Real Estate Dept. in the Woolworth Building.

We sat without speaking until 9pm.  We didn't want to leave.  It's hard to put your whole life into a reply paid envelope and put it in the mail.

It's great to know that FWW is alive and well and living in the UK."

....What a difference a decade makes.