After months of secret talks, Woolworth's two record suppliers announced that they planned to merge.

Joining forces would allow them to invest in the very latest technology, so that sounds could be recorded electronically with a microphone, rather than mechanically with a horn.

The technique not only improved the clarity of sound, but also the dynamic range, and allowed the grooves to be squeezed more closely together, increasing the playing time. What was more the 78rpm discs were larger too, bringing the total playing time per side to around three minutes.

The branding also received a major overhaul. The Victory's distinctive yellow labels and ship motif were eye catching, with clearer labelling and colour printed sleeves. One thing didn't change though. The sixpenny price was maintained, in keeping with the Woolworth maximum. Customers got twice as much record in four times the quality for exactly the same price. Sales rocketed and nearly ninety years later a quite remarkable number of the discs survive.

Listen closely and you will hear some of the biggest name artists of the era, singing under pseudonyms while under contract to another label, choosing one-off payments instead of royalties and bringing great music to the masses.

This page is part of a feature about Victory Records, allowing you to listen or download some of our favourite songs, along with Woolworth's other sixpenny record labels from the 1920s.

"The Victory" at Woolworth's 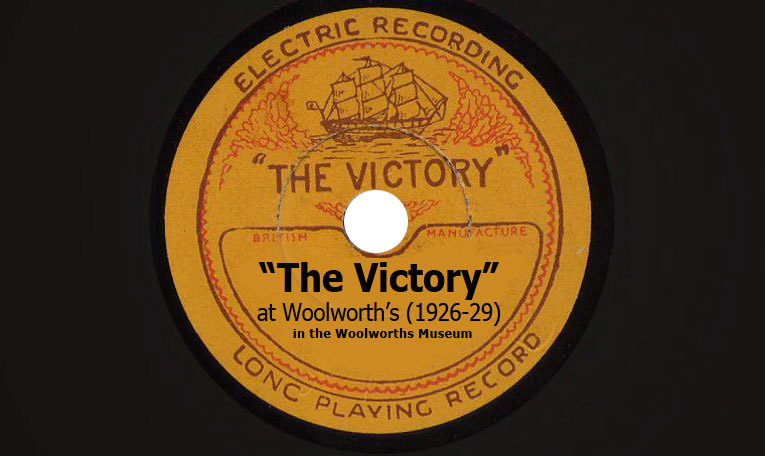 From 1923 until 1926 Woolworth commissioned two suppliers, Crystalate and Vocalion, to make records for its stores. The Managing Director, William Stephenson, believed that competition between the partners would keep the range fresh and ensure a good service.

As the offer grew in popularity it became very lucrative for the suppliers, but both feared that Woolworth might drop them and move to a single partner.

In secret they hatched a plan to join forces and then pool resources to convert from a mechanical to an electronic recording process. They hoped to persuade Woolworth to replace the previous brands with their new marque called 'The Victory'. The discs would have a seven inch (17.5cm) format with clearer sound and a longer playing time. They would have the same cost and selling prices as Mimosa and Little Marvel, making them even better value for money.

Woolworth was happy to accept the new arrangement. 'The Victory' releases included the latest popular songs and high fidelity instrumentals, as well as dances and a popular children's series. The sixpenny (2½p) discs were unbeatable value, matching the 'Broadcast Records' which sold in specialist stores for one shilling and threepence (6¼p), for both quality and variety.

Please choose a record from the menu below

Links to related exhibits in the Woolworths Museum