After years of laissez-faire, in the 1960s the US Parent Company began to assert itself. Under new leadership it was determined to modernise and diversify, and expected its British subsidiary to do the same.

Whatever the views in London, it soon became clear that non-compliance was not an option. A series of projects were launched, including central distribution, computerisation and, most controversially, the opening of huge out-of-town superstores under the Woolco name.

In parallel British Executives also pursued their own agenda. They resolved on a massive expansion for their existing city centre stores in-situ, rather than following the American trend to relocate into Malls (Shopping Centres), and continued to open stores operating personal service at each counter, delaying a move to self-service for as long as possible. North America had made the leap right back in 1950, and had trimmed its workforce down substantially as a result.

The 1950s had seen Woolworth UK rocket to the top of the stock market, as Britain and Ireland's biggest retailer. The 1960s were to prove much more challenging.

The Sixties at Woolworth's at a glance

The F. W. Woolworth Corporation went into the 1960s with over 1,000 stores in Britain and almost 2,500 in North America. The UK operation made £28.2m in 1960, while the North American and German stores recorded $48m. Expressed differently, the British subsidiary's profit per store was four times higher than its parent; it had risen to the number two slot on the London Stock Exchange as the UK's biggest retailer. Meanwhile in the USA the parent had finally started to see a return on a multi-million dollar investment programme that had run since World War II. This helped to make up some of the ground that had been lost to arch-rivals S. S. Kresge.

The US chain had a bold plan for growth and diversification and was prepared to borrow heavily to put it into effect. It bought several major fashion and shoe companies. This injected new culture and new ideas, which proved hard to absorb. Meanwhile with the British Isles already saturated with red-front stores, the subsidiary forged ahead with openings in the Commonwealth and enlargement of its largest city centre outlets. 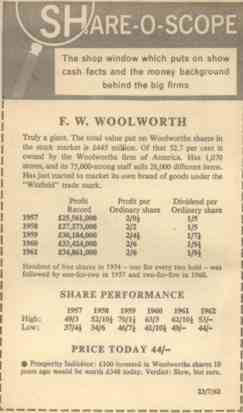 In 1963 the Daily Express booklet Share-o-scope: for investors  described F.W. Woolworth UK as "Truly a giant" pointing out that £100 invested in 1952 would have grown to £348 ten years later.  The book's verdict on the shares was "Slow but sure".

One thing that set the British firm apart from its rivals on the London Stock Exchange was the fact that it had no debt. It had funded all of its growth from retained profit and from the sale of shares. 1960 marked a turning point. The Board decided to borrow money so that they could accelerate the switchover to flourescent lighting in store and do more refurbishments.

The small loan paled into insignificance compared with the accumulated debt in North America, which had grown by by $117m during the 1950s to $130.6m.

The loans allowed the British Board to accelerate a programme of store extensions and relocations. Typically when a store moved to new premises they were just a few doors along the same High Street. Stateside the change was more radical as an increasing number of Main Street stores were closed and replaced by large, single-storey shop units in edge-of-town retail parks or by dual-floor mall stores.

Both companies developed "private labels", which would be known today as own brands. In Britain the Founder's middle name inspired 'Winfield', while the parent company opted to consolidate its many house brands into 'Woolworth's Satisfaction Guaranteed' packaging. Both also used an updated version of the long-serving Diamond W motif, as each firm struggled to persuade shoppers that the own label goods were better quality than the supplier-branded equivalents.

During the Sixties both companies had their own imitation 'Beatles' to please the Merseybeat generation. When the cover versions went out of fashion, each launched its first "real" music department.  The entertainment ranges and displays were transformed.

Both companies invested heavily in distribution warehouses and computer technology in the 1960s.  The concept proved highly effective in Chicago and was rapidly duplicated in Castleton, Lancashire, in an initiative which inspired the media to write about "Rochdale's first computer". The President, Robert C. Kirkwood, praised the Castleton Computer Centre on an inaugural visit.

The American Woolworth opened the prototype for a new chain of out-of-town superstores called Woolco in Columbus, Ohio in 1962.  Despite modest results, by the end of 1970 it had expanded to 150 outlets. The concept was also imposed in Britain, as the parent company started to flex its muscles for the first time in thirty years. The first UK Woolco opened in Oadby, Leicester in 1967. The misgivings of the Board were soon forgotten when the store proved a hit with the public. Permission for the development had been secured by investing heavily in the large, traditional store in Gallowtree Gate, Leicester nearby.

In retrospect the obsession with Woolco proved fatal, particularly in the USA. The chain never achieved the step-change in performance envisaged in the business plan. It distracted attention and drained resources. In the 1980s the stores were summarily closed as the only way to raise the capital necessary to pay off the mortgages when they fell due. Today many of the buildings on both sides of the Atlantic are among the best performers within the Walmart empire.

Woolco - Woolies get out of town