The Bailiwicks of Jersey and Guernsey, which lie about 14 miles from the Normandy coast of France and about 100 miles from the south coast of England, were part of the Duchy of Normandy at the time of the Norman Conquest of Britain in 1066, sharing a Monarch from that date. Each island became a self-governing British crown dependency in the thirteenth century. At the outbreak of World War II, although the islands were not part of the UK, for many years the British Consitution had included a provision to defend the Islands.

Woolworth opened a store in the Jersey capital of St Helier on 9 April 1921, followed by another in the Guernsey capital of St Peter Port on 20 August 1927. Both proved popular with local people, and attracted considerable trade from tourists during the summer holiday season, quickly establishing themselves as two of the most profitable stores operated by the British company.

Germany's rapid advance across the European mainland after the outbreak of World War II left the islands exceptionally vulnerable, particularly after the capitulation of France. It was widely expected that the British government would defend the islands, as a precursor to a possible German invasion of the UK. But the British Government decided that the islands were indefensible. Instead it offered to evacuate any people who wanted to escape to England, but the islands would have to fend for themselves.

No Woolworth personnel took the opportunity to evacuate, despite their management being on temporary assignment from the mainland, although a few families did send their children to stay with relatives in the UK.

Guernsey fell to the Germans without a shot being fired on 30 June 1940, with Jersey falling the following day on 1 July 1940. The smaller islands of Sark fell on 2 July and Alderney on 4 July 1940.

This page tells the story of the two Woolworth stores during the period of German occupation.

Woolworth Jersey and Guernsey during the German Occupation 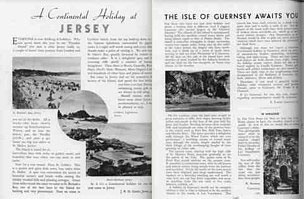 In Summer 1939 an employee of the Woolworth's in King Street, St Helier submitted an article to the house journal, The New Bond. It invited colleagues to visit Jersey for a "Continental Holiday". Not to be outdone, the next edition featured a piece from High Street, St Peter Port headed "The Isle of Guernsey Awaits You". Despite their outing into journalism, neither store expected quite so many German visitors the following year!

By then the British Army, which had seen its forces over-run in France and had evacuated from Dunkirk, had abandonned the Islands, after instructions from London that they held no strategic value to the enemy. 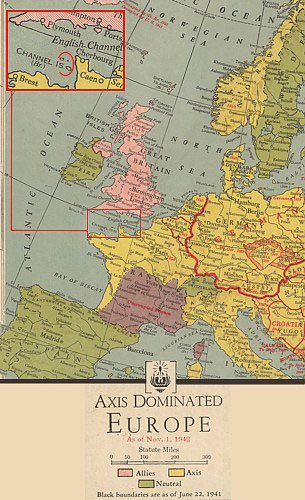 In May and June 1940 the German Army swept across France en-route for Paris. Once they broke through they seemed unstoppable.

With France under German control it could only be a matter of time before the Channel Islands, which had shown allegiance to the British crown since Norman times, fell to the Germans. Hitler viewed Jersey, Guernsey, Alderney, Sark and Herm as the jewels of his European empire.  With their British red pillar and 'phone boxes, their oh-so English policemen and quaint way of life, they would be a prize indeed.  Besides the huge propaganda value of pictures of the "English" and the Germans working together, he was convinced that Churchill would decide to fight to get the islands back, and would fail.

So it was that in June 1940 the Germans prepared a marine attack on the Channel Islands, not knowing that all troops had been withdrawn.

As part of the withdrawal the British had offered to evacuate the islanders. Many children were sent to the mainland, along with around 24,000 adults. But many others resolved to remain in the homes that their families had occupied for generations. 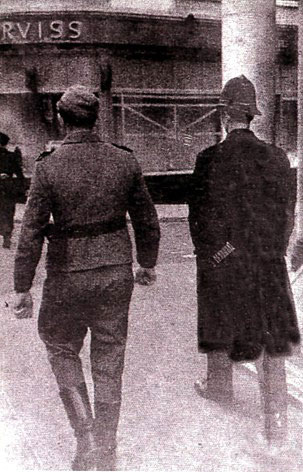 The sight of a British policeman and a German soldier walking side by side became a regular feature, causing discomfort to many people in England.

In the early days of the occupation, the German troops were under strict orders to behave with decorum. As a result initially they treated the islanders with respect and tried to demonstrate that the islanders and their new masters could get along.

One of the first places where this policy showed was in the Woolworth store in King Street, St. Helier, Jersey. 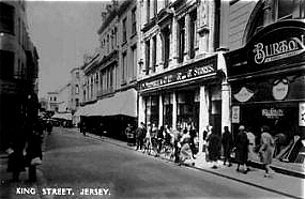 Some of the soldiers thought of Woolworth as a German company, having shopped in one of the stores in the Third Reich.  Hearing that the King Street branch had sweets and chocolates on sale (which they had not been able to get during their march through France), they went in to shop.

Store staff and customers were surprised that the German soldiers said "Good morning", joined on the back of the queue, waited their turn and paid for their purchases with shillings and pennies. 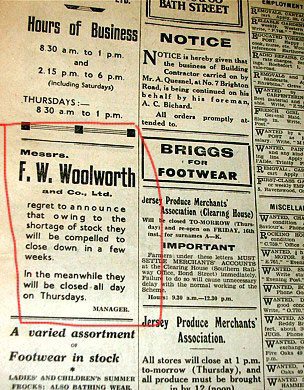 The invasion brought Jersey shoppers out in force, stocking up with everything. Without fresh supplies from the mainland (and with very limited indigenous sources for most items), stocks were soon depleted.

On 11 August the Store Manager placed an advertisement in the Jersey Evening Post announcing that the store would be closing all day on Thursdays. This was a first for the store which had not traditionally had even an early-closing day.

The advert stimulated yet more queues and helped the Manager to clear the stockroom of all manner of surplus items! 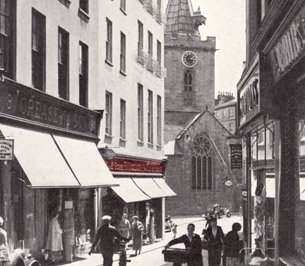 In Guernsey, according to our records, it was much the same story. The occupying forces began by being scrupulously courteous. Some soldiers told local people that they had no wish to be away from home, and no interest in war. They told staff at Woolworth that they just wanted a quiet life. They queued patiently and, as a result, for the most part were afforded a measure of courtesy by local people.

The three-floor store was heaving with customers in the early months of the war and as fast as items were brought down from the stockroom they sold. 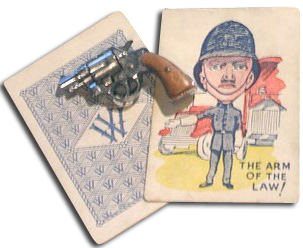 The long-suffering Guernsey police were assigned German chaparones. It is said that Officers took one local practical joke in good spirits, despite it happening many times. Islanders were ordered to "Hand in ALL guns and small arms to the police station" Many took a pride in going to Woolworth's, buying a tiny threepenny toy gun, and then taking it straight round to the police station to allow the paperwork to be completed in triplicate before a receipt was issued.

One islander at the back of the queue went a step further. He had a set of Woolies kids playing cards, turned up to "Mr Copper the Policeman - the arm of the law" and shouted "Snap!" each time another cap-gun was revealed. Fortunately the Germans saw the funny side and let the impertinence pass. 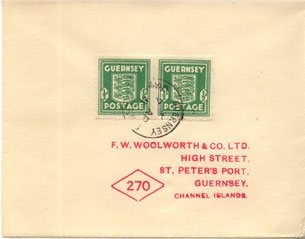 From the beginning of the occupation until liberation five years later, the Channel Island stores could not communicate with the mainland, and received no shipment of goods from the UK.  Company records show the stores as "closed - under enemy occupation" from 1st July 1940 until July 1945 in Guernsey and August 1945 in Jersey. Snippets of information in our archive suggest that the stores may have traded independently during some of this time.

For example the envelope above, which originally contained a supplier's invoice to the store, was posted in April 1941.  It bears the stamps used during the occupation, without any reference to the British monarchy.  Throughout the war few letters were sent overseas, and local people were only allowed rare, short, censored Red Cross messages.

The islands suffered terribly during the occupation, particularly towards the end of the war.  The Germans were civil for the cameras and propaganda, but they were an unwelcome force of occupation. They did not enslave the islanders in the same way as the forced labourers they brought to build Jersey's Underground Hospital, the only concentration camp on British soil (in Alderney), or the elaborate fortifications made of thousand of tonnes of cement.  But local people were forced to work for the Germans, their freedom was removed, and people (particularly Jews) disappeared - transported to a terrible fate in Germany or Austria.

As the tide turned in the war and the Allies swept across France, captors and captives alike in the Channel Islands had very little food and came close to starvation.  Local people showed immense courage and restraint in very difficult circumstances.

When liberation finally came in 1945, Woolworth set about reinstating and modernising its Channel Island stores. Work on the Jersey branch (pictured above) was complete in time for Christmas. Among the features that are evident are products priced at up to thirty shillings (£1.50) - a far cry from the sixpenny (2½p) maximum of 1939. The shortage of building materials is evident - there are no wall counters, instead the lower walls have been painted in a mahogany colour to simulate where the counters should be! Some of the new stock was sourced from the mainland, other items were purchased locally. Ever so slowly life started to return to normal. But the islands will never forget their brush with the Third Reich.