Before any performance, it's always advisable to have a dress rehearsal. Frank Woolworth's first show in Utica, New York was a flop.

Rather than sweep the episode under the carpet, the 5 & 10¢ pioneer was always proud to talk about it. He considered it an important learning, which went on to shape the Company for many years.

His recovery from the failure demonstrated true strength of character and resilience in the face of adversity. 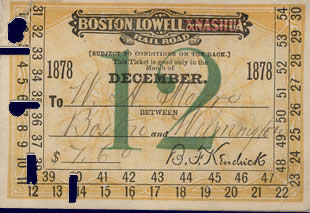 Frank had been surprised at the popularity of the 5¢ bargain table among the affluent customers at Moore and Smith in Watertown. There it had been part of a wider offer, but it had convinced him a stand-along store could prosper selling only 5¢ lines. His boss William Moore had estimated that the set-up cost would be around $300 for rental, fixtures and stock.

As his father did not have any ready cash, he asked his wealthy uncle, Albon McBrier, to bankroll the scheme. McBrier declared that he might as well throw his money in the river, telling his nephew to be grateful for his salary of $8.50 a week. Undaunted, Frank asked Moore for help. 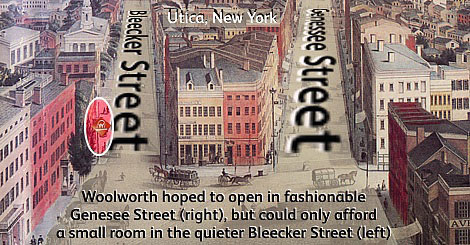 Moore offered $300 of merchandise, if Frank could pay the rent. He sent him off to find premises, armed with a season ticket to tour nearby towns by train in search of the right spot.

Frank fancied Utica, about 500 miles (800km) north of Manhattan and 80 miles (133km) from Watertown. He reviewed the main thoroughfare, Genessee Street, but thought it too expensive. 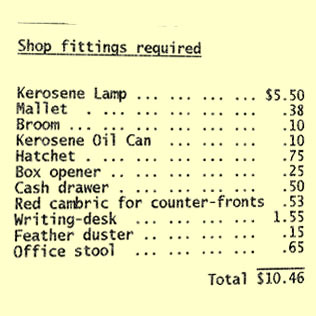 The would-be-tenant persuaded the landlords, who were bankers, that they would struggle to let the premises right away. He showed them the amount that he was investing in stock and the items he planned to sell. They were impressed and agreed to give him immediate access to set up and to accept the rent a month in arrears. Frank raced back to Watertown to finalise his order for stock and to plan the opening.

To minimise his risk, Woolworth left his wife and daughter in Watertown and hired only temporary help. He improvised counters from upturned packing cases, draped with red cloth.The store was illuminated by a single paraffin lamp. The greatest outlay was for two signs. A red and gold banner on the salesfloor announced "Any article 5¢", while above the entrance doors, the fascia proclaimed "The Great Five Cent Store".

Frank was keen to get going. He took possession of the premises on Monday 17 and intended to open on Saturday 22 February 1879. A local printer provided the finishing touch, charging $7.50 for 2,000 handbills. These were delivered door-to-door. 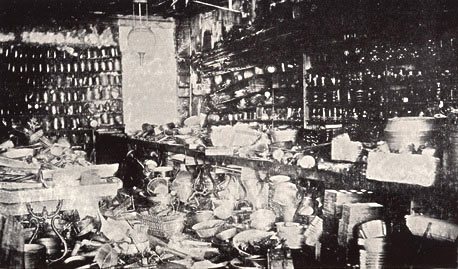 Saturday arrived with the store in chaos. There were wood shavings everywhere . Frank worked like frenzy to tidy up. He was disappointed to have to delay the opening. At 6pm he was interrupted by customer, who said "I have read your circulars and I find among the list of goods a fire shovel at five cents. I wish to purchase a fire shovel",

"Very well", said Woolworth, "just step inside and I'll wrap it up for you". A few more shoppers followed later, followed by a torrent on Monday. In later life the Five and Ten magnate wished he had asked the lady her name for his memoirs! But he did keep a note of his first range:

The table above shows the cost price per gross (144 products) which he had agreed with William Moore in Watertown. It illustrates the wide difference in margin between the products. Frank also stocked "practical novelties", costing $1.15-$1.40 per thousand.

For a few weeks after opening the store was a hit, but gradually trade declined. Many businessmen would have thought it was all over, and just a flash in the pan. But Frank remained convinced about the concept. He concluded that it had been a mistake to locate in a back street. Next ime he must find a busy in a town where the shoppers were more thrifty and would welcome his bargains. He served notice to the landlord, sold through his stock and banked enough cash to settle the rent and repay his loan from Moore.

As he closed the doors in Utica after only two months' trade, Woolworth established some key principles for the future: 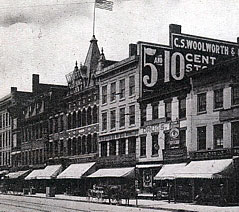 For the record, on 21 July 1888 a new F. W. Woolworth opened in Utica. Second time around the Founder had plumped for a prime position at 153 Genessee Street and had hired his friend and former Moore's co-worker Carson Peck to manage it. The results were so spectacular that in 1890 Peck was promoted to the new role of the General Manager of the whole Company, becoming Frank's first number two. The thriving store was sold to brother Sum and soon became one of the mainstays of that Woolworth chain. It was destined to remain a prime Woolworth location for much of the twentieth century.