Pictures and information about the first successful F.W. Woolworth store. It was called the 'Great Five Cent Store' and proved a big hit with the local community in Lancaster, Pennsylvania when it opened on 21 June 1879.

Just ten days after closing in Utica, Frank Woolworth was ready to open again. As planned he had settled his debts and traded until the end of the lease in the the New York state store, while planning his next venture. This time he chose Lancaster Pennsylvania, in the heart of Amish country. He had secured a good spot in North Queen Street and had spent some days researching the local market. He found the local people both amiable and thrifty, making Lancaster the ideal town.

Clerks were hired and a new sign was painted. A total of $410 of merchandise was placed on sale. There was a key difference second time around - 10 cent as well as 5 cent lines. This broadened the selection that could be offered. Woolworth hoped that this would allow him to keep the offer fresh beyond the first few weeks. The tiny salesfloor was crammed floor-to-ceiling. Despite a frontage to the street of just 14 feet (approx 4 metres), the shop looked highly distinctive. It had a red fascia sign across its whole width, with the words "Woolworth's 5 and 10 Cent Store" picked out in gold lettering. A smaller oval version with the same wording hung above the doorstep.

Frank Woolworth opened for business on June, 21st 1879. Despite choosing not to advertise, trading was brisk. By tea time the store had taken $47.65 - a respectable sum - but then it got really busy in the evening, taking another $80, summing to a first day cash total of $127.65. Overall Frank had sold over 30% of his stock in a single day! 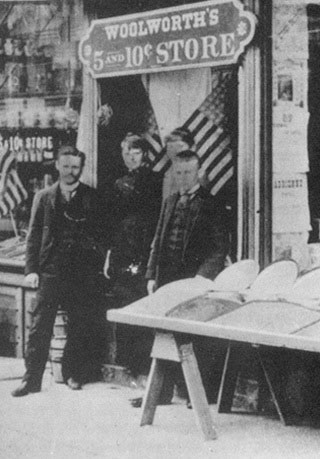 The counters were mainly made from upturned packing cases. All of the fittings were very basic. Staff were rushed off their feet. Their boss expected a lot for a salary of $1.50 per week. Purchases were wrapped in old newsprint to keep costs low. The Pennsylvania Dutch housewives approved and told their friends. The best sellers were tinware, toys, wash basins, handkerchieves and ribbons.

At the end of the first day's trading Frank Woolworth wrote to his father:

DEAR FATHER, I opened my store here for trade yesterday and did not advertise any. No-one knew there was a 5 cent store in this city until Friday night and we managed to sell yesterday in one day $127.65, which is the most I ever sold in one day. We sold $80 in the evening alone. I had 7 clerks and they had to work you bet. We could have sold $200 if the store had been larger. Jennie helped me last night ... I am thinking of starting a branch store in Harrisburg, Pa. and putting Sum in it if Moore and Smith will spare him. 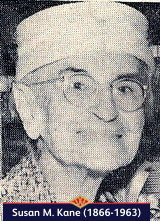 One of the assistants from the store on that first day, Susan Kane (pictured second from the left, above, age 13 and right, age 95) worked in the store for four years, getting to know Frank Woolworth and his family very well. Eighty years later, on 24 January 1963, when interviewed by the New Era, Lancaster's local paper, she had vivid, fond memories of her time in-store, and was able to describe the first day's trading in detail.

She told feature writer that Frank Woolworth was "a fine man". "He sat on a platform atop a winding stairway at the back of the store, and guarded the cash box while he was watching the clerks." "There were three clerks, all of whom got $1.50 a week. We weren't assigned to a particular counter. There were two counters along the side, and we just followed the customers around. After we made a sale, we walked back to Mr Woolworth to get change. He entered each sale on a tablet and added them up at night". " 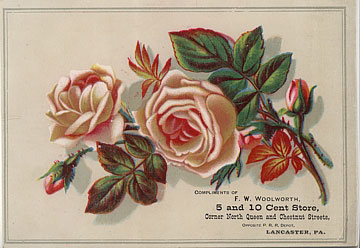 Frank's prudence in keeping costs down, coupled with the variety of items on sale, helped to create a compelling offer. Sales grew as news of the store spread. Learnings from the first year's trading in North Queen Street profoundly influenced the future direction. For the next hundred years Lancaster had a special place at the heart of Woolworth's, alongside Watertown where the idea was born.

When he needed inspiration, Frank often returned to his favourite store. No expense was spared, with regular improvement schemes. In 1900 he chose the location for his first "skyscraper" - a store with five stories of offices above and a restaurant and theatre in a roof garden at the top. It became the first Woolworth building. It features in our 1900s gallery.