Reaching for the sky

Lancaster, Pennsylvania had a very special in Frank Woolworth's heart. As the home of his first successful store, he treated it as one of the 'holy of holies', alongside William Moore's store in Watertown, where the fixed price five cent table idea was born. As sales and profit grew in the chain, 'Store 1' started to look small and tired. Quietly, behind the scenes, Woolworth planned a spectacular new store, befitting Lancaster and almost touching the sky.

The new premises housed a much larger and more modern Woolworth's, he planned additional retail and office space, and even an open theatre at roof level. Modestly he gave the project the working title of 'The Woolworth Building' but called it his 'skyscraper'. Its success gave him the bug for a much larger project ... but that was for later! 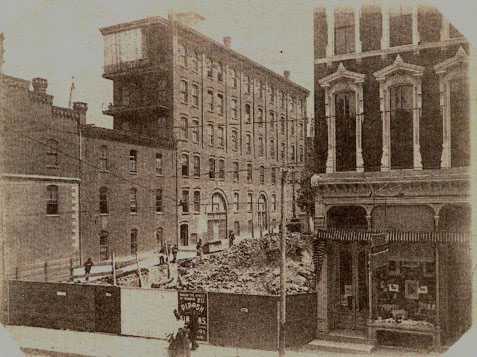 By 1900 the 5 & 10¢ had become a great success. Frank Woolworth had established a syndicate of Friendly Rivals who all stocked his merchandise..

Frank spent most of his time on Buying Duties. This took him to Europe regularly, chasing new novelties and luxuries. The visits gave him a chance to take in the local culture, visiting museums, art galleries and landmarks and keeping an eye on shopping trends.

Success brought very little recognition. It seemed American High Society rated Buyers as shopkeepers rather than merchants. Frank resolved to set the record straight and to leave a mark for posterity. He observed that real estate developers highly prized, and that good building schemes tended to generate excellent returns. He began to plan a development of his own.

For some time he had mused about enlarging his store in North Queen Street, Lancaster. The branch enjoyed a special place in his heart as his 'ground zero'. Rather than expanding into adjacent premises, he systematically bought up property along the road in a run-down spot which local people considered to be the wrong side of the street. He kept his plans a secret to avoid inflating the price. When he had acquired the whole block, he revealed spectacular plans for a 'skyscraper', which would consist of well-appointed retail space, with five floors of offices above, capped by a roof garden and an open air theatre with panoramic views for miles around. The proposal was well received and work started without delays. The opening was a resounding success and the 'Woolworth Building' quickly established itself at the heart of the local community. 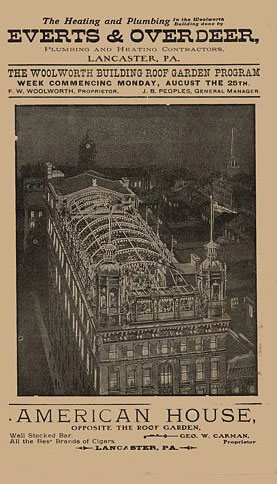 Some days the theatre was used by Woolworth's, as a venue for Store Managers' and Stockholders Meetings (see below), but at least two or three days per week Frank and his Building Manager Jno. B. Peoples (District Manager for the North Western Mutual Life Insurance Company, one of his tenants) would lay on spectacular entertainment with refreshments. Many shows were a sell out. The clever design of the building made it a suntrap on bright summer evenings, that could be enclosed and heated as the nights drew in. Among the coming attractions noted in our programme were: 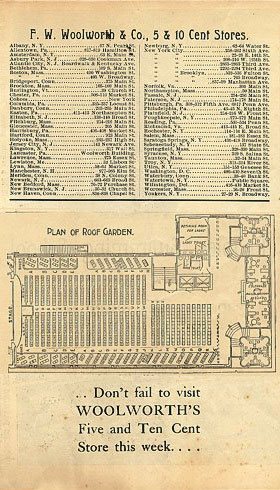 The roof top theatre was a big hit with the people of Lancaster, attracting visitors from far and wide. It was famous for its spectacular sets, visible in the picture below as the backdrop for a team photo of the Five-and-Ten's Store and Office Management, which was taken in 1901. American associates were impressed by the theatre. Some noted that it was one of only a few places where their Frank Woolworth really let his hair down. 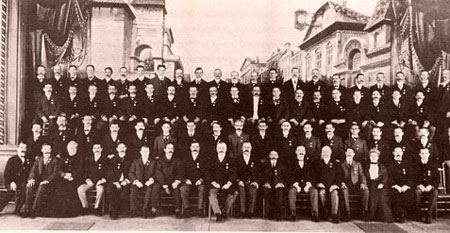 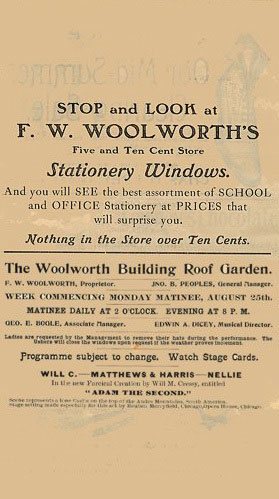 In many ways the Lancaster Skyscraper was a dress rehearsal for the Woolworth Building, commissioned just a decade later. It paid its way, thanks to a marketing campaign that was initiated before the first brick was laid. It was opulent, with gargoyles and turrets on the outside and the finest interior fittings throughout.

But unlike the Broadway Place building in New York, the Lancaster edifice has not been preserved. Shortly after World War II the F. W. Woolworth Co. applied for permission to pull it down and replace it with a bulk-standard concrete and glass superstore. This stood on the site until the late 1990s. Today even that building is gone, replaced by an extension to a neighbouring bank.

The photograph on the right above shows the well-appointed salesfloor in the Lancaster skyscraper shortly before the First World War. The layout includes many of the features first pioneered by Charles Sumner Woolworth in his flagship store in Scranton, including well-appointed mahogany counters, wide gangways and bright electric lighting. 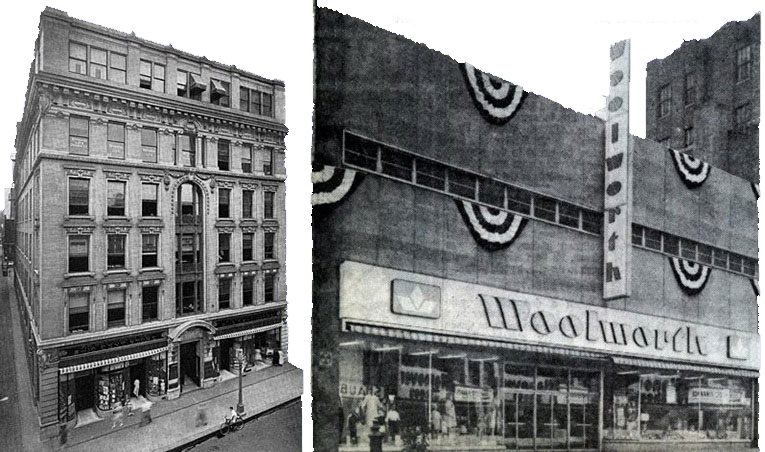