By 1905 many new faces were entering the 5 & 10¢ trade, in competition to the Woolworth Syndicate. Some sought to become established more quickly by buying up their rivals, either by mutual agreement or through hostile bids. This caused concern within the Syndicate.

Frank believed that forming a company would help fend off any unwelcome approach. The move secured the loyalty of his key workers by allowing them to buy in and share in the continuing success of the business, while also releasing cash for the Founder.

The move was soon followed by other members of the Syndicate. One by one they drew down their investment, amassing fortunes in ready cash by incorporating. 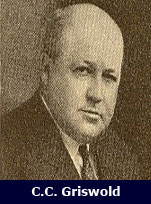 These men were the first Directors and Officers of F. W. Woolworth & Co., when it incorporated in New York in 1905. The decision was difficult for Frank Woolworth. He opted to limit share sales to trusted employees, family and close friends. In doing so he consciously passed up the much higher revenue that could have been raised by selling stock to the public.

On this page we explore the rationale, in Frank Woolworth's own words.

"This will be the last letter I shall write to you as individual owner and proprietor of all the five-and-ten cent stores running January 1, 1905. It is a sad occasion and I will tell you later why I am transferring my business to a Corporation. Hereafter I will write to you as a representative of a Corporation. I am sorrowful, but modern methods must be pursued. Twenty-six years I have endeavoured to conduct five-and-ten-cent stores on an honourable and systematic and paying basis. But time is fast flying away and I cannot expect always to be in control of this vast property."

The Articles of Association specified that the Corporation would be organised under the laws of the State of New York and would retain the name F. W. Woolworth & Company. They came into effect on 16 February, 1905. The shares were divided between 50,000 units of preferred and the same number of common stock, each with par value of $100. The preferred stock guaranteed a seven percent dividend, which was payable quarterly on the first day of April, July, October and January. The common stock did not guarantee a fixed return, but would return an income once the preferred obligations were met. The preferred stock was offered at par (face value) to members of the Woolworth family, and the employees. There was no public subscription. Thus the five-and-ten remained a strictly family affair. 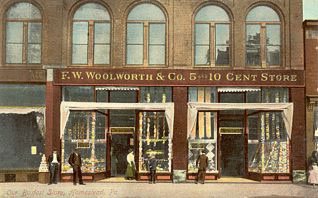 The organisation meeting elected Woolworth, C. C. Peck, C. P. Case, H. A. Moody and H.T. Parson as Directors (all pictured at the top of this page). Frank was appointed the President and Hubert Parson the Treasurer (Finance Director). C. C. Griswold and H.W. Cowan (pictured in the second row above) were elected Assistant Treasurers.

A number of Executives were given stock so long as they remained in post for five years, until January 1, 1910. These 'golden handcuffs' applied to B. W. Gage, C. M. Osborn, J. H. Strongman, A. V. Ivie, Walter Williams, C. B. Winslow, George W. Strongman, Lambert G. Smith, L. J. Surdam and Frank B. Carpenter.

"The ties that have bound us together so long are not broken. We are now more united than ever. Now every manager of every store, every clerk and office boy, every sales-lady is safe because no matter what happens to me, or to any officer of the company, the business goes on just the same. Before you were all taking chances in betting on my health and ability. Every time I have been sick or unable to work I have thought of the terrible responsibilities resting on my shoulders and of so many people depending on my health. The corporation is more expensive than the old way of doing business, but that is the penalty for security."

"We could have capitalized for much more and sold stock to the public, but we're not going to do that. Subscriptions have already been received for 6,431 preferred shares. I am not anxious to dispose of any stock, for as fast as I sell my income is reduced, and I think I'll put a price of $110 per share after the first dividend is declared. However, if any manager wants a little more, I may be able to accommodate him at par, even after April 1. Now aboout the security. Is this stock worth $100 a share? Is this business worth $5,000,000? All l can say is I was offered that much for it before it was ever turned into a corporation. Preferred stockholders really have the first mortgage on the entire property, though power of control is vested in the common stock. The common stock is held by myself and the managers of the New York and Chicago offices only, and none of this stock is for sale at present."

Within seven years the stock had increased in value by more than six fold, setting the pattern for continued steady growth right through to the 1920s.

Seeing the personal wealth that the move generated for Frank Woolworth, Charlton, Kirby and Knox copied the move between 1905 and 1908. Perhaps they could see the writing on the wall. Frank had just raised enough cash to buy them all out, should he want to.