Just five months after setting sail for the British Isles, the small team of pioneers were ready to open their first store on Friday November 5, 1909.

They had chosen the port City of Liverpool, then one of the largest in the British Empire, and had leased a well-appointed store with three salesfloors and entrances in Church Street and around the corner in Williamson Street. It had been a huge undertaking. As well as recruiting and training a team of local workers, they had identified and sourced a similar range to the one stocked in the USA, but manufactured and supplied from local factories and Continental Europe. They also had to face up to stern competition from Marks and Spencer, which prompted a peppering of penny products to complement the planned threepenny and sixpenny lines, which were the equivalents of the 5¢ and 10¢ price points used in North America.

On opening day many challenges were yet to come. Could the American upstart win over the British public and the scepticism of the media and local landlords? They would have to open the doors and find out! 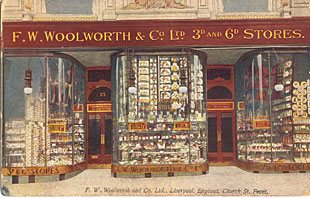 The first British Woolworth's opened in Church Street, Liverpool on Friday 5 November, 1909. The Founder, Frank Winfield Woolworth, had chosen the location after a nationwide tour. He had picked the bustling seaport on the North West coast of England because of its thriving industry, civic pride and superior transport infrastructure. He had been particularly impressed by the grandeur of the city's public buildings and its 'magnificent' overhead electric railway.

He had delegated responsibility for planning the opening to his second cousin, Fred Moore Woolworth, who he had appointed Managing Director of his first overseas subsidiary. After signing the store lease the entrepreneur had taken his family for a holiday in Switzerland before returning home to New York City. 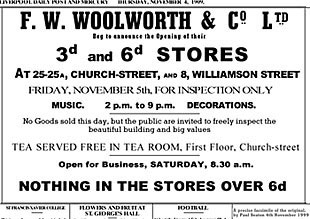 The Founder was unable to make it to the opening. Instead he asked Fred to play "Mr Woolworth" on the big day. The MD duly scheduled a pre-opening preview for the day before trading commenced, as company custom from the USA dictated. Members of the public were invited to join dignitaries, shopkeepers and journalists for refreshments in the tea room, and to 'freely inspect the beautiful building and big values'. As promised entertainment was provided by a local orchestra.

The MD made a short speech before cutting the ribbon. He explained that almost every product and almost every worker in the new store was British, and that not a single item on sale cost more than sixpence. The 3D and 6D Stores aimed to bring a wide selection of household items and luxuries into the price range of ordinary people. He hoped there would soon be branches 'across the North and beyond'.

Early the next day Fred and his Directors scoured the morning papers for their verdict on the preview. A few nationals managed a short mention. The Daily Chronicle  was typical, offering faint praise tempered with alarm that the range included hunting knives, which they described as 'un-British'. They sneared that Mr. Woolworth did not seem to know that there were no wild bears in the City of Liverpool. But the influential local paper, the Liverpool Daily Post & Mercury, was more generous:

Many thousands of people yesterday afternoon and evening availed themselves of the opportunity afforded by the proprietors, Messrs. F. W. Woolworth & Co. Ltd., of inspecting their new stores at Church Street and Williamson Street.  The handsome premises, formerly occupied by Henry Miles & Co., were thronged the whole time they were open, many no doubt attracted by the novel character of the business transacted. 6D is the highest price charged for any single article in the establishment, but the variety of articles obtainable is infinite. Though none were on sale, the goods were laid out ready for the commencement of business to-day, and occasioned the visitors considerable surprise in the matter of their exceptional value. Two orchestras were engaged in discoursing music yesterday, and there was a constant run on the tea room where the proprietors supplied free teas to all who were fortunate enough to reach the room through the crush. 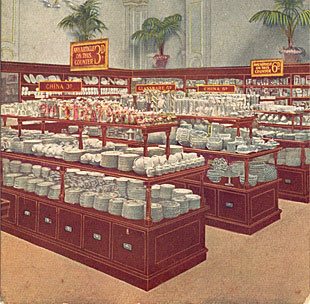 The Daily Mail  reporter held off visiting on the preview day, instead attending with a huge crowd on Saturday 6th. His copy was less positive. His worst fears had been realised. He had found himself crushed in a throng of more than 60,000 people trying to squeeze into the store, and had witnessed huge queues at the tills. He concluded that Woolworth's was a circus and its proprietor was a twentieth century Barnum. He could only assume that Liverpool had been chosen so that Mr. F.W. Woolworth could skidaddle back to New York when things went wrong, leaving his debts behind him.

Ironically Frank was already in New York, pacing his office, waiting for news. Cousin Fred's wire reached him before the Daily Mail . The 5 & 10¢ supremo had always believed that all publicity helped, and took the sour grapes in good heart. He told his General Manager, Carson Peck, "Let them all come and see what the fuss is about!" Peck admitted the figures were 'acceptable'. 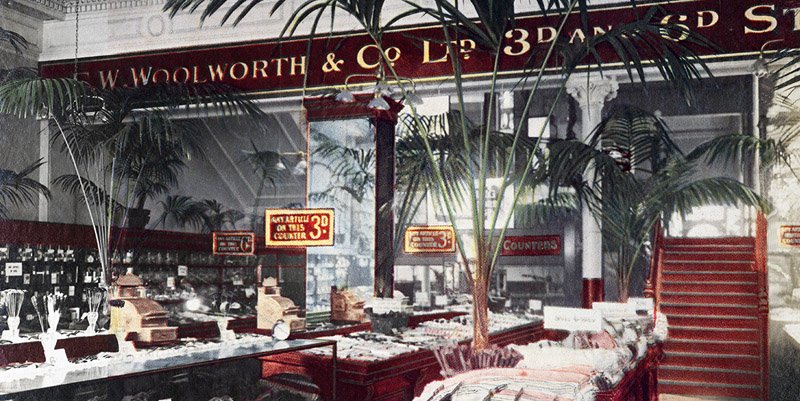 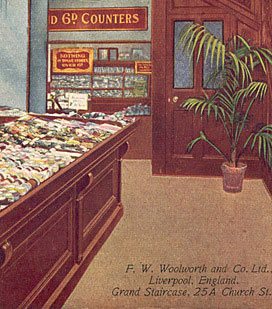 The self-imposed maximum price at Woolworth's was sixpence ('6D') which was the equivalent at the time of 2½p, or £2.11 at today's prices. The amount was chosen because it was roughly the same as the ten cent limit operated by the parent company's F. W. Woolworth stores in the USA. But many of the items displayed in-store were sold for threepence ('3D'), with a sprinkling of lines in each department for one old penny ('1D'). The low-priced items were included to target the main competition, Marks and Spencer's Penny Bazaar.

Many of the penny items were part of the 'Notions' department at the back of the ground floor. This range included Haberdashery, Dress Patterns, Knick-Knacks and Shoe Goods. Other counters included Underclothes, Toiletries, Fancy Goods (Jewellery and Purses), Sweets, Stationery, and 'Seasonal'. Reflecting the time of year there were bold displays of Christmas Cards, Decorations, Gifts and Tin Toys.

The main Home ranges were on the upper floor. The counters included pots and pans, utensils, household goods, hardware and tools, including a small selection of Hunting Knives, which had proved a best-seller in Canada. The crowning glory upstairs was an eye-catching display of china and glass, which is illustrated above. 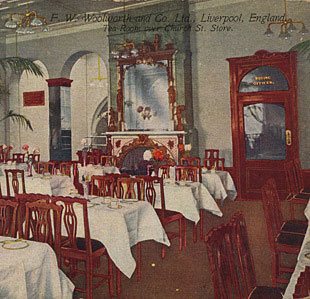 Most of the range in Liverpool was inspired by the 5 & 10¢ selection. Initially Woolworth had hoped to export it from the USA, but had found it would be too expensive. Woolworth had confided in his deputy, Carson Peck, "We have no walkover here ... Some of their ideas we would do well to copy." The new team had to work like frenzy to find similar items from local sources.

It happened that the previous owner of the building had used the upper floor as a Tea Room. Rather than remove it, Woolworth saw the potential to use it to entice shoppers inside to browse. He hoped this would address Britain's window-shopping culture, under which shoppers were expected to choose from the windows and only go into a shop when they planned to buy.

The idea proved popular with shoppers. Most stores opened over the next forty years included a Restaurant or a Tea Bar. Woolworth also took the idea home and put it to the test in Lancaster, Pennsylvania and Fifth Avenue, New York. Today many Americans have fond memories of the Lunch Counter or Soda Fountain, which became a popular feature of their local Woolworth's.

To keep costs low, initially the Liverpool store also served as the British headquarters. A door in the corner of the Refreshment Room led to a suite of rooms on the third and fourth floors of the building. Between 1909 and 1914, when the Buying Office transferred to Oxford Street, London, W1, a steady stream of suppliers carried boxes of samples through the store and up the stairs in search of an order. The catering staff claimed that they could always tell whether each salesman had left with an order. Some returned smiling ear-to-ear and said 'goodbye', others let the door slam behind them and man-handled their samples cases and sloped away !

Behind the door, the man who many of the suppliers met was Byron Miller, who had started his career as an errand boy in the USA and had risen to be Supintendent of all the stores in upstate New York. In 1910 the role of Buying Director was taken by John Snow, while Miller took charge of the Northern District. Miller's breadth of skills later helped him to secure the role of President of the parent company.

When he stepped down on his sixtieth birthday in 1936 Miller had fond memories of the opening day. He had listened as Liverpudlians gave their verdict on the products that he had chosen. Some were complementary. Others were down-right confused. He told his biographer, J.K. Winkler, that one lady had held up a product and yelled "I say wot's this blawsted thing for? Wotta you do with it?" It is unlikely that his reply "it's for cleaning the fawcett" was much of a help ! 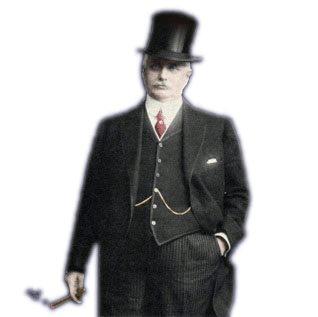 When Frank Woolworth heard of the success in Liverpool, it turned out that he wasn't busy after all. It seems that he had stayed away in case the store was a flop. He summoned his chief scout, E. J. Smith from Buffalo, and booked the first available passage to England.

When they arrived, he commissioned a set of picture postcards of the storefront and some of the displays. Copies were sent to every Manager across North America, including the Doubting Thomases at headquarters. A covering letter said "The store is simply beautiful, the handsomest in Liverpool. Its wonders have reached London and other cities in England. Our chief competitor who has 6½D bazaars all over England is rumoured ready to give up and not fight us.... This competitor has cut all his prices in Liverpool to 4D and is still selling very little." We are profoundly grateful to the Woolworth family members who shared their postcards with the Museum that bears their ancestor's name.

By Christmas E.J. Smith had tied up deals for a dozen further stores. Woolworth's UK had arrived.