End of an era

The British Woolworth was founded as the Threepenny and Sixpenny stores, and stuck rigidly to these price points despite its US parent abandonning them altogether in 1935, and its German sister company dropping them just four years after its first store opened. It had proved a winning formula which had seen the chain outpace the competition and establish itself as the country's largest retailer.

But, in 1940, with the world at war and with most suppliers working at full capacity producing munitions and goods to support H.M. Forces, executives were faced with the stark reality that they must change or die.

The limits were officially suspended rather than dropped as customer reaction was monitored. Fortunately shoppers flocked to the stores for the higher priced items, admiring the breadth of range that the Buyers managed to keep available and the spirit of the staff in "carrying on" despite the hostilities. The fixed price era passed gently away as everyone focused on the greater goal of preventing an invasion and driving back the enemy. 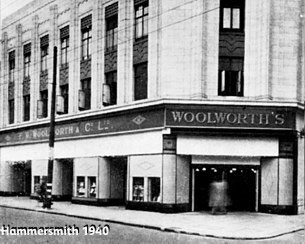 The outbreak of war forced prices upwards. The increases were fuelled by shortages as suppliers switched to manufacturing for the war effort.

This gave the Woolworth Board a dilemma. Either they had to abandon some of the key ranges, or to drop the sixpenny price limit which had been the defining feature of the Company for more than thirty years. They reluctantly decided to put prices up, at least for the duration of the war.

The store in Hammersmith, West London, was among the first to get a new look, with no mention of the prices. They were replaced by the "Diamond W" motif at either side of the name. The layout matched the approach that had been used in North America and Germany since 1932. 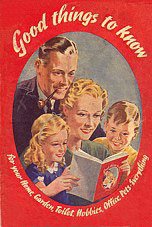 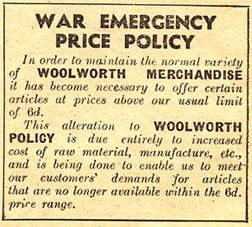 A second edition of the customer magazine Good Things to Know was published in 1940. Its tone had changed, focusing on military insignia, aircraft recognition, make do and mend and air raid precautions. Buried among its content was a short announcement that the war had necessitated a rise in prices so that a full range could be offered.

A few of the lines featured in the brochure had gone up by a halfpenny (approx ¼p). The sky did not fall, and gradually the increases became more pronounced. 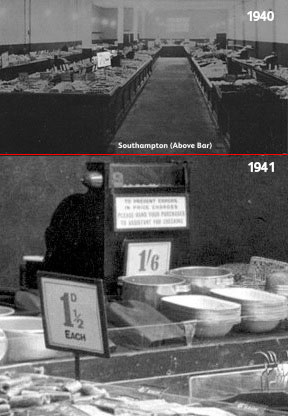 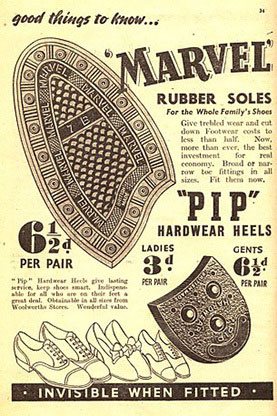 Marvel Rubber Soles were the first product to go over sixpence. They went up by a halfpenny.

The rise allowed some items dropped in the Thirties to be stocked again. Before long there were items at seven and eight old pence, and rationed items like socks and vests rose to one shilling (twelve old pence, equivalent of 5p).

In 1944, after an absence an absence of four years, new stocks of tin saucepans were one shilling and sixpence (7½p); this was three times the maximum before the War. 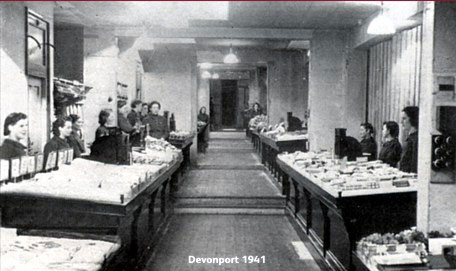 Introducing a wider range of prices made life hard for the staff. They did not have the benefit of 'adding up' cash registers, and were expected to tot up purchases in their heads or using a simple ready reckoner table, showing all the combinations of three and six pence.

The old British currency operated in base twelve, with twelve pennies to a shilling and two hundred and forty to a pound, making such sums much harder than in today's decimal money!

From 1940 onwards the complexity was compounded by rationing. Clothing and food purchases required coupons. Every citizen had an allowance of garments of different types and of each major food group. There was a different coupon for each, which had to be handed over when making a purchase. Officially they were non-transferrable.

Stores had to confirm that the coupons were valid before cutting them out of the book and placing them in the till with the money. They were not supposed to accept the small pieces of paper loose.

The extra handling time for the coupons caused long queues in-store. Most customers waited patiently with no fuss, knowing it was a way of supporting their sons, daughters and partners fighting overseas. 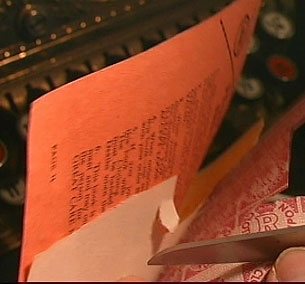 Sometimes customers had coupons but the stores had no stock.  But on other occasions stores had the stock but no shopper seemed to have a coupon. Some items were rationed, others quite similar were not.  And officials from the Ministry always seems to have advice to offer, even when it was not really needed.

When news broke that sweets were to be rationed in 1942, there were long queues as people stocked up. The pictures, taken by Mr Bowen the Store Manager, show the rush at the Old Town Street, Plymouth store in Devon.

For a great website about the Woolworths Plymouth store during World War II (and much more), please take a look at Steve Johnson's excellent Cyber Heritage site at http://www.cyber-heritage.co.uk/history/fww.htm 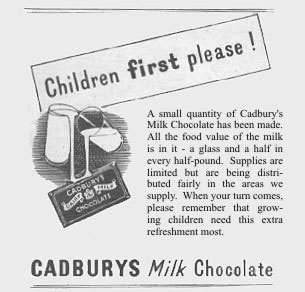 Throughout the war, staff at many Woolworth's were proud that they had never turned a child away without sweets. An informal arrangement meant that older customers often left their coupons in-store "for the little ones".  Everyone turned a blind eye, in this great example of the blitz spirit that helped everyone through the dark days of war.

Manufacturers like Cadbury's, Nestlé and Melba all continued to advertise during the war. The copy asked people to "think of the children", as stocks were very limited.The Ministry of Food controlled where stocks were sent, directing supplies to the areas suffering the worst bombardment.

Rationing got more severe when the war ended. Sweets only became readily available again in 1954, meaning there is a generation of grandparents and great grandparents who really value their sweets and chocolates today.