Our place in the sun

One of the great strengths of the American F.W. Woolworth Co., which helped it to become a truly international retailer, was its ability to adapt and transpose its American formula overseas.

In the late nineteenth century the first branches in Canada had a distinctly Canadian flavour, a national headquarters and a proud team of Canadian personnel.

Within five years of opening the first English branch in 1909, the formula was very distinctive and the American Founders had gone native. They only became American again in dealing with the Irish Free State, adapting, engaging and sourcing many products locally.

The same story applied in Germany, as an American sourcing operation turned into the German 25 und 50 Pfennig stores, which were so strong that they successfully stood alone once the umbilical cord to New York was cut as a result of political changes in 1933.

Yet, after a promising start in Jamaica, the British chain's overseas ventures used ex-patriate Managers and Supervisors and shipped goods in containters from the UK to the West Indies, Caribbean and Southern Africa. The London Board did not seem to grasp the idea of allowing its children to grow and prosper by finding their own way, opting to nanny their new-borns and pitch them to ex-patriate shoppers rather than local people.

But, despite this shaky start, it is more than a little ironic that these children are the sole survivors of the once great Empire controlled from London. 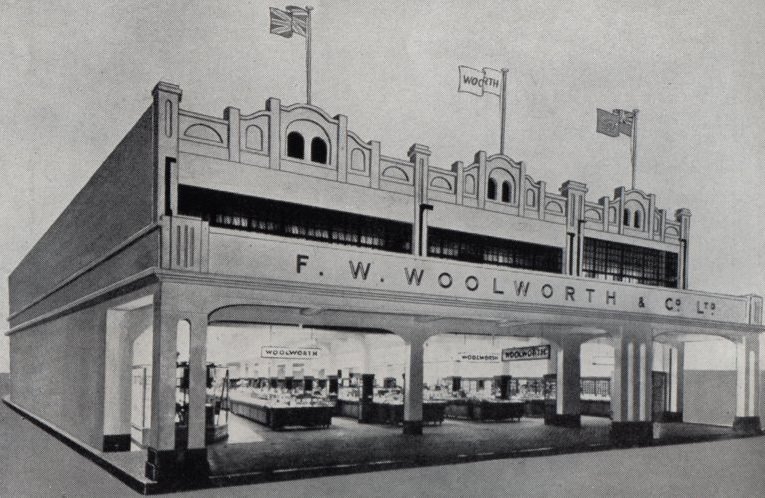 By the mid 1950s, nearly every substantial High Street in the United Kingdom and the Republic of Ireland had an F. W. Woolworth store, and the Company was making record profits. Executives turned their attention to where the next growth might come from, and looked overseas. While the chain's American parent managed operations in continental Europe and South America directly, they had always hoped that the British subsidiary might tackle the Commonwealth. Australia and New Zealand were effectively off-limits because of mistakes in the 1920s, which had allowed a copycat chain to open independently, but there were many other options. British Directors warmed to the idea of overseas stores, dubbing them "Our stores in the sun". Store staff were also enthusiastic and tracked progress through the pages of the staff magazine. Jamaica was targeted for the first opening. It was believed that a chain could be established cheaply and at comparatively low risk, and would provide a lot of learning. The first branch in King Street in the capital, Kingston, opened on its doors on the British chain's 45th birthday, 4 November, 1954. 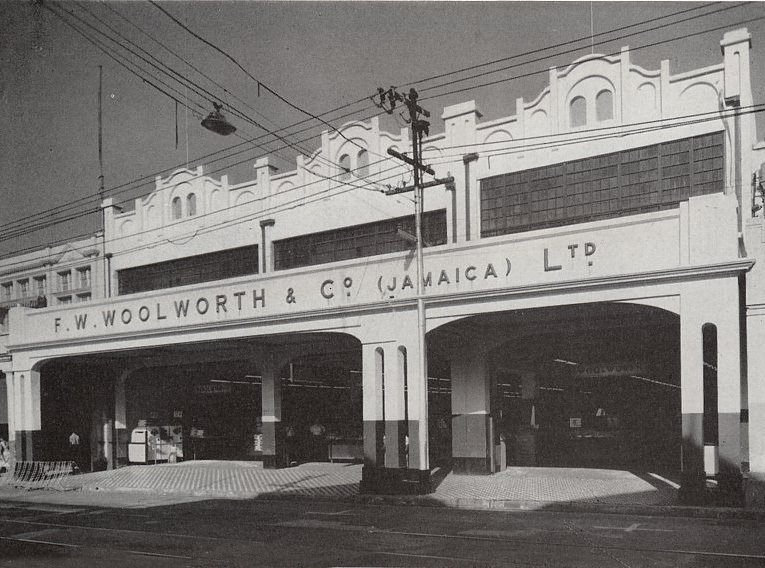 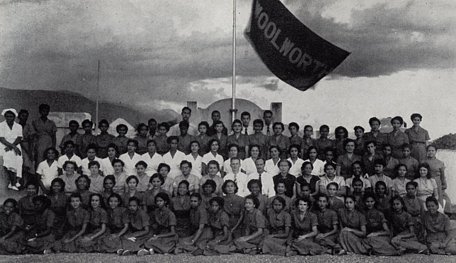 The open-fronted store had large fans above the cornice line but did not stretch to air conditioning. It stocked mainly locally-sourced products, topped up with items from the UK. Specialist shopfittings like tills and scales were made in Britain. The counters were locally built and were raised an extra four inches above the floor.

Store staff were recruited locally, but the management and supervisory team was hand-picked from the rising stars back in Britain. The pattern for the first store closely matched the approach that the Americans had taken when they first opened a British store in Liverpool, but was not repeated in other countries. 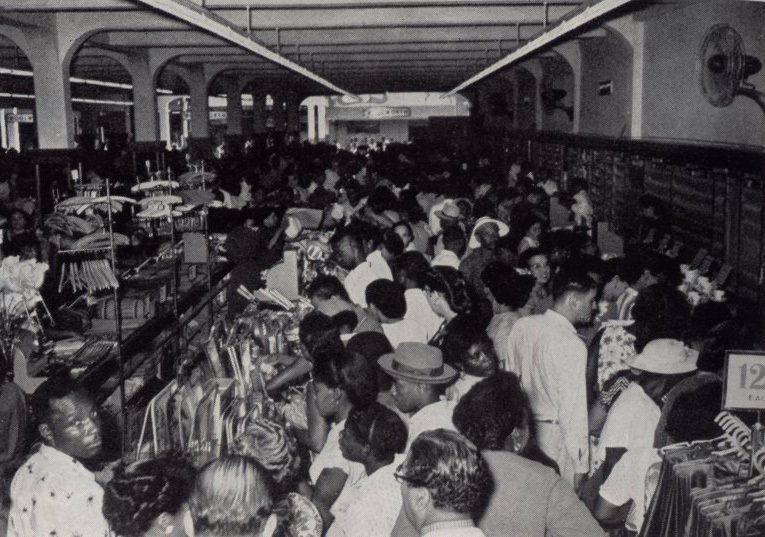 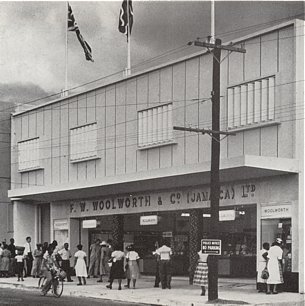 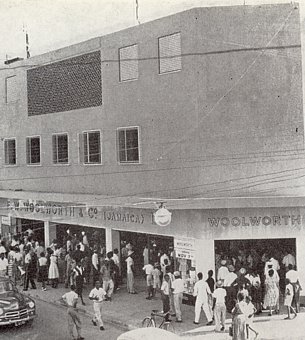 The first Jamaican store was targeted to local needs and was distinctly different to the UK model. Sales were buoyant and the store came close to making a profit in its first year, even without economy of scale. Two further branches were added over the next five years. In parallel the parent company tackled both Trinidad and Barbados.

Click here for more pictures of Woolworths in the Carribean in the 1950s. 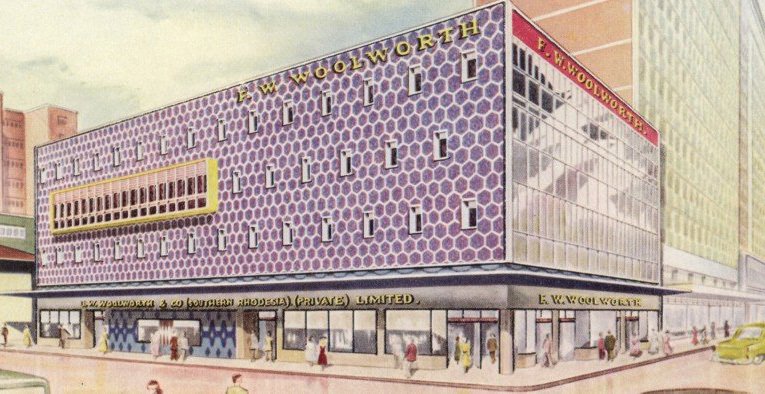 After a good start in Jamaica, each subsequent opening became more and more British. The new Stores became showcases of the latest thinking about ranging and shopfitting from London. 'British' products were sourced locally where possible, but many items were packed into shipping containers and despatched to the stores by sea. This was particularly apparent in ambitious plans developed to open a huge £1m store in Salisbury (Harare), the capital of the British colony of Southern Rhodesia (modern day Zimbabwe). The company bought up several city blocks for redevelopment and used a London architect to design premises very similar to new stores in Wakefield, Yorkshire and New Street, Birmingham. The interior was virtually identical to the F. W. Woolworth store in High Street, Guildford, Surrey. 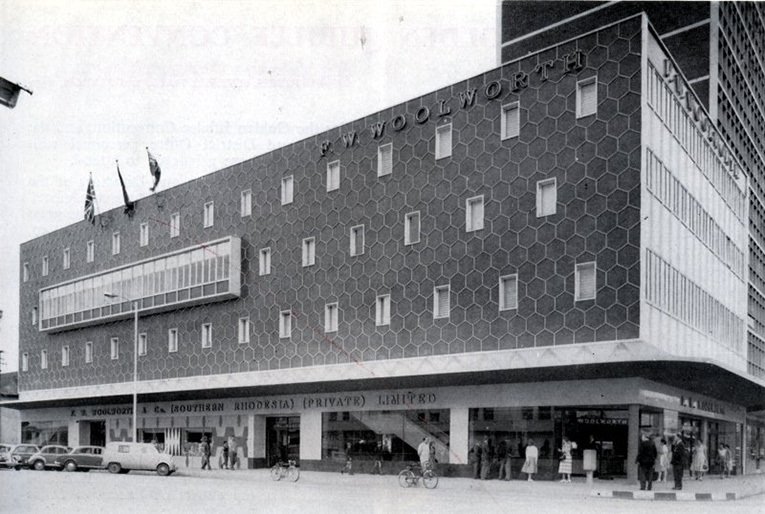 Not content with exporting the store management team from the UK rather than recruiting locally, Company bosses even recruited no less than twenty-six ex-patriate assistants who had learnt their craft in the British stores before emigrating. When the store opened its staff brought experience from the branches in Aberdeen, Belfast, Bradford, Carlisle, Colne, Coventry, Croydon, Doncaster (x2), Dumfermline (x2), Dundee, Edgware Road (London), Glasgow, Hitchin, Montrose, Morecambe, Rotherham, Rothesay, Rhyl, Prestatyn, Ruislip, Southall, South Harrow, Uttoxeter and Worthing. Today it seems the height of arrogance to go to a foreign country and impose a little corner of England, but at the time Britain continued to treat its colonies as an Empire. Company bosses followed the guidance they received and provided a store targeted principally to ex-patriates. 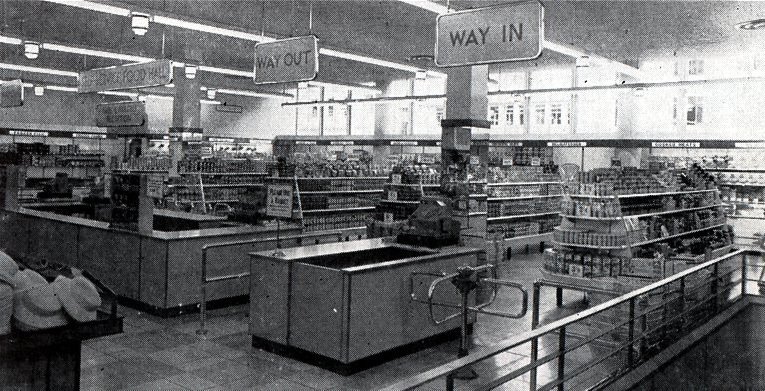 The heavy investment in the Zimbabwean flagship store was expected to start paying back after five years. Sales were encouraging and prompted a further rather smaller branch opening in Bulawayo. The business plan took no account of the political scene in the colony, which had sought independence and Commonwealth membership throughout the 1950s. The British Government refused to grant independence because the request did not include any roadmap to black majority rule. After wrangling in the early 1960s, the regime of Premier Ian Smith unilaterally declared the country independent in 1965. British PM Harold Wilson declared the move illegal and enforced a package of sanctions. Woolworth was caught in the crossfire. For almost 20 years the British chain was unable to take a share of profits from its subsidiary and the local Woolworth stores were unable to receive goods from the UK and had to find alternative sources for their products. As fate would have it the Zimbabwean stores finally came back onto the British books shortly after the UK company was bought out in 1982. The new owners quickly decided to sell off all of the overseas operations. Today the Bulawayo branch has closed, but the Harare branch survived the collapse of its former parent and continues to operate as part of the South African Woolworths chain. To find out more visit http://www.woolworths.co.za.

Click here to see more pictures from our album of the Zimbabwe (Southern Rhodesia) stores.