While every other Woolworth store around the world - and even the Internet website - was assigned a store number, only one had a registration number. And rather than a cinema front, or a standard brick and parapet building, the bright red AEC Reliance had a unique appearance all of its own, and the only way was Essex. All aboard to find out more!

One of the more bizarre episodes of Woolworths' history was the 1957 launch of a mobile shop, which was intended to be the first of a fleet. A single decker AEC reliance became, quite literally, a coach-built Woolworths, with counters where the seats should be and a Manager/Conductor, with two assistants. Once stocked it became a small self-service shop, which could pop up anywhere. It was crammed with a selection of household items and toiletries. It was sent to a selection of towns in Essex where the firm did not have a traditional store, on the same day each week.

Resplendent in red livery, and for the first time branded WOOLWORTHS (without an apostrophe or the 'F. W.' prefix), the mobile shop was launched in the Spring of 1958, hitting the mean streets of Basildon New Town and Canvey Island, along with trial visits to Thetford and Haverhill. Special offers and the novelty of the idea ensured plenty of customers, and good early sales. 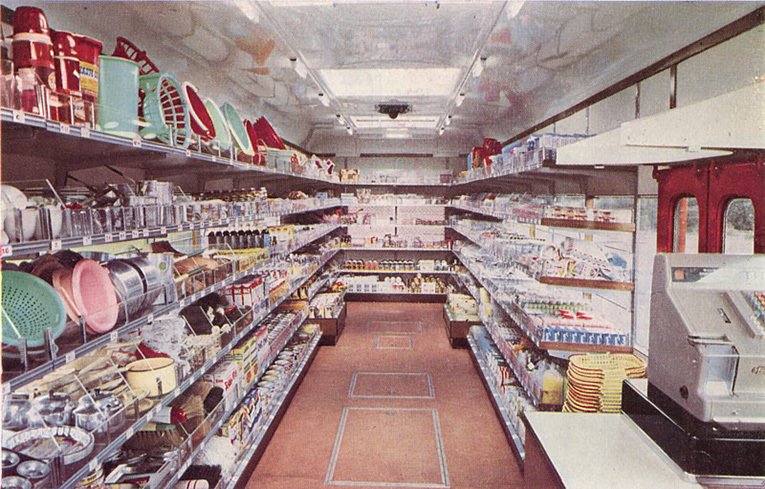 The shop was one of Woolworth's first self-service outlets, embracing the principles more whole-heartedly than the bricks and mortar stores. It had separate entrance and exit doors and one of the company's first electro-mechanical cash registers which added up the shopping instead of the assistant having to do this. By using the latest display principles the store was able to stock over a thousand products priced from one old penny (½p) to five shillings (25p). Every inch of wall space was crammed full.

Any illusions that Company bosses had that life would be easy for the mobile shop were soon shattered. While it was warmly received by some shoppers, local traders hated it, particularly in established towns which didn't have a a Woolworth store. They lobbied local councillors to ban the mobile shop, pointing out that it did not pay rent and rates or employ local people.  They said that the lower running costs gave the chain an unfair advantage. Fortunately Basildon and Canvey Island traders were more generous and were prepared to give the new idea a chance. 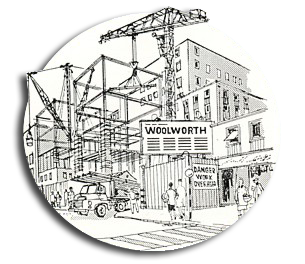 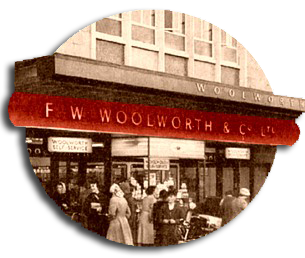 The mobile shop proved a good way of testing the market, helping to identify locations for new bricks and mortar stores. Trading results prompted openings in both Canvey Island and Basildon. But after just two years' operation it was quietly decommissioned. The work was written off as an interesting experiment, and a political minefield!