At the beginning of World War II there were 757 Woolworth stores across the United Kingdom and 10 in the Irish Free State. Some were in big towns and cities, while others were in small local High Streets and more rural locations.

As Managers and male staff were conscripted for military service, and long-serving women were called up to the Land Army and for factory work, those left behind had to keep the stores going through thick and thin.

Over the course of the long conflict, almost half of the mainland stores were damaged by enemy action. 26 were razed to the ground by bombs and fire and had to close, but the defiance of the staff allowed 302 branches to re-open and get right back to work. Managers took their jackets off and worked wih their teams with mops and buckets, shovels and tools from the counters, and brushes heavily laden with Donald Macpherson's distemper and yacht varnish to make good the damage and get the tills jangling again.

Countless more branches were saved from ruin by brave staff who slept in-store with stirrup pumps at the ready to put fires out, or manned the rooves to spot enemy planes and raise the alarm.

This page celebrates the heroism of that army of warriors from Woolworths who kept the home fires burning, and kept the British public stocked with everything they needed to make do and mend and defy the Hun. We salute them one and all.

"They also serve
who only stand and wait"

One of our favourite Pathé Newsreels of World War II (Home Front Blitz Reel 2, 1940) highlights one of the issues of becoming a global retail brand. During the conflict F.W. Woolworth had stores in the countries of both the Allied and Axis powers, and even a couple in the invaded territory of the Channel Islands. Although the film doesn't say so, it shows a Woolworth employee pointing to a handwritten sign that summed up the spirit of the Home Front..."you ought to see what the RAF have done to our Berlin branch!"

As they dusted down the display of best-selling threepenny Mighty Midget books, staff were reassured by the titles, which included "Wreckers over Munich", "Berlin for Tonight" and "I captured a U-boat".  But as you read this page and think of the people of Coventry, spare a thought for Dresden, and for Berlin as well as London, Hamburg and Hull and the suffering of the Ruhr Valley as well as Merseyside. Indiscriminate bombing was not only the hallmark of the Hun. 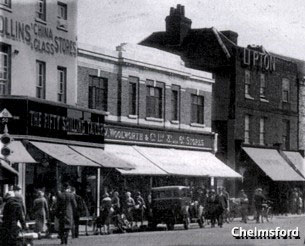 Just when the Germans might have won the Battle of Britain by completely destroying the country's air defences, Goëring ordered a change of tactics. The Luftwaffe was sent to bomb industrial cities and the coastal ports. The bombers returned night after night. And day after day staff and their Managers swept up, picked up the pieces and got right back to work.

For example the branch in Chelmsford, Essex, was hit by an incendiary bomb. The store's own firewatchers put the fire out, cordoned off the affected area and re-opened for business! Customers remember the terrible smell of scorched mahogany, and how they admired the fighting spirit of the staff. 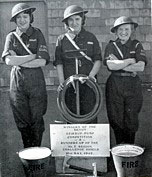 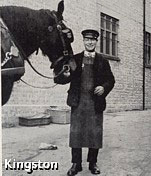 Staff proved adept in manning the defences. Every store was issued with a Stirrup Pump (left), a simple handheld device with a length of hose, used to spray water from a bucket, creating an improvised fire extinguisher.

With fuel rationed, a number of London branches used horse-drawn carts to collect goods from the Warehouse at St Pancras Goods Station. The Kingston-on-Thames stockroom manager and his trusty steed (right) made the thirty mile round trip twice a week. Further afield a number of managers, including Miss Froome from Camberley, rode to work on horseback. A young office clerk groomed and fed the animal in her lunch break.

Despite everyone's best endeavours, a number of stores suffered severe damage from incendiaries or lost their rooves to bombs. Wherever possible steps were taken to get them back open quickly. Executives considered this as much a public service as an attempt to make profit. When the branches in Devonport, Plymouth, Coventry, Canterbury and Spalding were bombed, each was quickly transferred to a temporary shop improvised by the Construction Department. 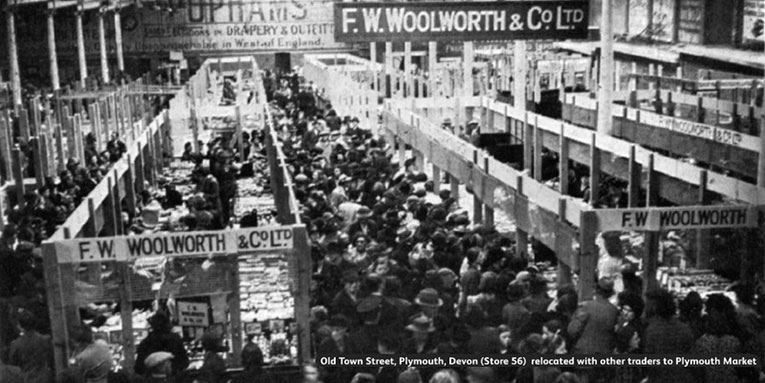 A key challenge during World War II was to maintain morale on the Home Front. Woolworth Buyers worked extensively with Government to find ways in which the stores could help, in a dialogue that really took hold when store colleagues bought Spitfires for the RAF. Prompted by Lord Beaverbrook the Government made a series of remarkable concessions:

After 1941 the nightly bombardment started to ease. For a while the main hardships were shortages and rationing, and the prolonged absence of loved-ones fighting overseas. Colleagues focused on raising money for the war effort. A popular approach was to display captured armaments or plane wings in a window and to collect donations in a bucket.

But in 1944 the blitz returned with a vengeance. Highly explosive doodlebugs (pilotless planes) fell from the sky in heavily populated areas. Sadly the rocket-driven super doodlebug, the V2, caused the worst civilian losses of World War II when the Woolworth store at New Cross Road, Deptford was destroyed at lunchtime on Saturday 25 November 1944. Find out more in our special tribute and memorial features here in the Woolworths Museum. 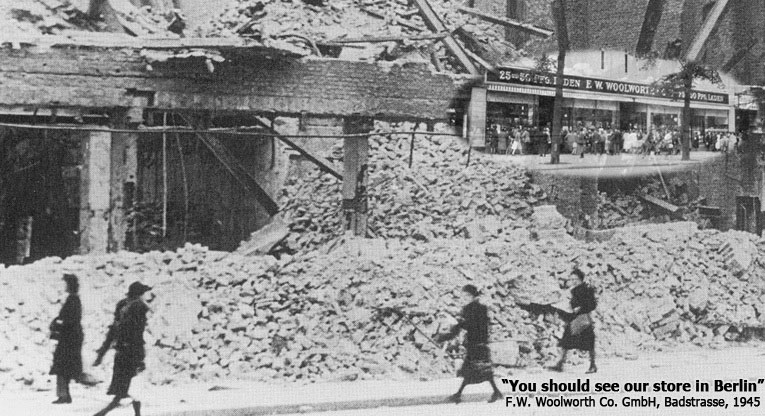