Seymour Knox was a cousin of Frank Woolworth, and one of his first partners in the Dimestore trade. The two men competed to be the biggest and the best.

Frank did not want to admit it, but it was the young buck who tamed the city centres, coming up with a superstore format which captured the public's hearts and took the Syndicate to the highest population centres. He showed how to tempt shoppers to dig deep and buy ten or even twenty items in a single visit. The Woolworth chain owed a great debt to Knox for disseminating what he had learnt so that his friendly rivals could follow his lead. 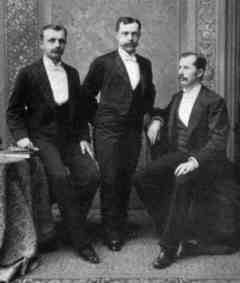 Seymour Horace Knox (centre, left) was a first cousin of the Woolworth brothers. He followed Frank and Sum's example, taking an apprenticeship in an upstate store. He also became friends with many at Moores in Watertown, visiting regularly. In 1884 Frank invited his cousin to participate in a joint venture, putting up half the money to open a Woolworth and Knox Five and Ten Cent store in Reading, Pennsylvania, USA.

In later life Frank remembered its first day on 20 September 1884 vividly. The co-owners had expected a large crowd, but not one person was outside when they opened. By lunchtime only a handful of shoppers had visited and Knox had started to panic. He had liquidated his assets and invested every dime into the store. Frank took him for lunch, followed by a walk round the park, trying to work out what had gone wrong. They returned at 1.30pm to find the store rushed of its feet. The pattern was repeated each day thereafter. It turned out that a big local factory ran an early shift that ended at 1pm. The workers left with cash to spend. 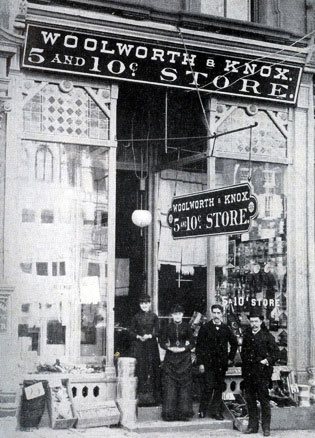 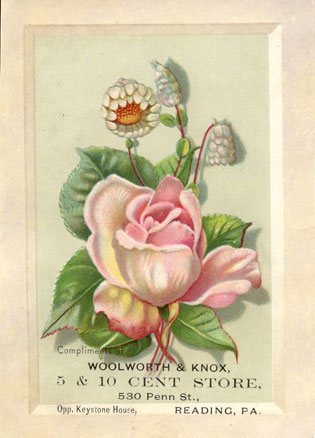 The Reading store gave Knox the perfect launch pad. After stumbling in Newark, he struck gold again in Erie, PA.

In October 1888, he and Frank opened another 5&10¢ near the Canadian border at 409 Main Street, Buffalo. The result was better still.

Like Sumner Woolworth before him, Knox was soon able to buy out Frank with his share of profits. He made Buffalo his headquarters and agreed to carry his cousin's European lines and his special buys. 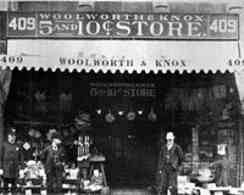 Rather than go it alone, in 1889 Knox formed a new alliance, this time with an outsider. Earle Perry Charlton had shown a keen interest in the Buffalo operation while working as a travelling salesman. Although he was a first-timer and the junior in the liaison, he proved a good source of product knowledge. Like Knox he was an astute businessman. Syndicate Members came to value his fresh perspective. Uniquely, he was neither a Woolworth family member nor a Moores veteran.

The new partners aimed to expand into new areas without any five and tens, pushing westwards through the Rockies into Canada.

A stream of successful openings followed. It seemed Canadians adored dimestores, and there was only one show in town.

After four years of remarkable progress, they faced a shock in the run-up to Christmas on December 14, 1893. As they worked on the next opening, news broke that the headquarters in Buffalo had burnt down, as flames spread from the major fire at the adjacent Wonderland Building. They won plaudits from far and wide when, just four days later, they successfully opened a fully stocked temporary store just a few doors away from the charred remains of their flagship. But lessons had to be learnt. 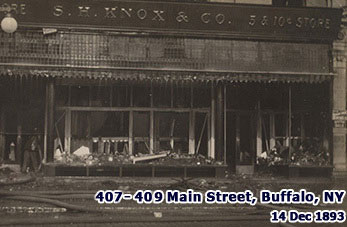 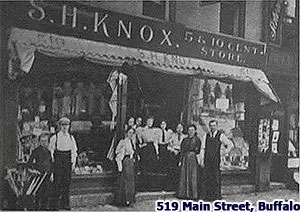 The rapid spread of the fire showed how vulnerable huge open-plan wooden salesfloors were. It led the whole Syndicate to establish new fire precautions.

From 1894 fire buckets filled with sand were placed prominently in the aisle in front of every counter.

Knox had learnt the hard way. Shoppers in Buffalo had to make do with his temporary store for a full two years before full service was restored. Fortunately though contingency planning ensured that the pace of expansion was maintained, and stocks were not interrupted.

The grand re-opening in Buffalo, marked a turning point. After six years together, in 1895 Knox and Charlton decided to end their partnership. Each would got it alone. They remained the best of friends, and were finally reunited as Directors and SVP's of Woolworth's seventeen years later in 1912.

Taking stock oof progress in 1895, it was clear that the decision to take the Five-and-Ten into new territories had been a wise one. Knox was quick to capitalize on the uniqueness of the proposition, boasting for example in publicity materials "Only Store Of its Kind in South Dakota", and going on to reap the rewards. 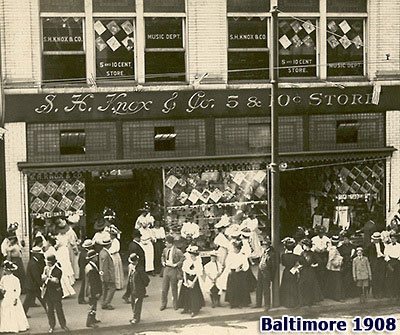 In-store Knox balanced his merchandise between products sourced by Frank Woolworth and ranges of his own. He kept his finger on the pulse and was quick to spot the potential of new lines and rush them to the shelves. His management style was more authoritarian than that of his cousins.

Both Frank and Sum Woolworth chose to engage their Store Managers and persuade them to their point of view, which sometimes gave problems. For example Frank struggled to persuade his team to embrace the idea of selling sheet music. Knox was able to proceed more rapidly. He deemed the department a key feature of his new new stores and told his Managers to do what they were told.

Sheet music had already become a best seller at S.H. Knox & Co. before Woolworth's had even put it on sale. 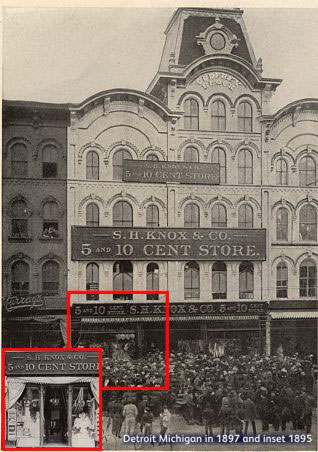 Seymour Knox had a profound influence on the future direction of the Syndicate by proving that one of Frank Woolworth's core assumptions was incorrect. After the failure of the prototype 'Great Five Cent Store' in Utica, New York, Frank had assumed that only suburbs and rural communities could sustain a five-and-ten. He did not believe that cheap products could generate enough profit to pay the higher rents and wages of city centres.

Knox ignored the perceived wisdom and chanced his arm with a small store in Detroit, Michigan. He invested in a smarter shop-fit, brighter lighting and more attentive service. Huge crowds thronged outside before the opening. Some people did not get inside all day. Even with an army of clerks the store was too small to cope. Within the year it was expanded six-fold, taking over all of the neighbouring shops. The smarter look attracted more affluent shoppers, who were happy to pick up a bargain. It provided a formula that helped other Syndicate Members to master big cities.

Knox and Woolworth shared a love for self-publicity, and boasted of their success. When Knox published picture view books of the towns and cities where he traded, he reserved pride of place for a photo of his 5 & 10¢. While other landmarks had captions like "The Town Hall", his store got star billing with hyperbolae like 'the world's busiest store'. The Michigan store was tagged "Detroit's favorite spot - S.H. Knox & Co."

All of the Pioneers copied the City Centre formula with openings of their own. Knox went on to enjoy particular success in State Street, Chicago, Illinois and on the corner of Queen's Street and Yonge Street in Toronto. 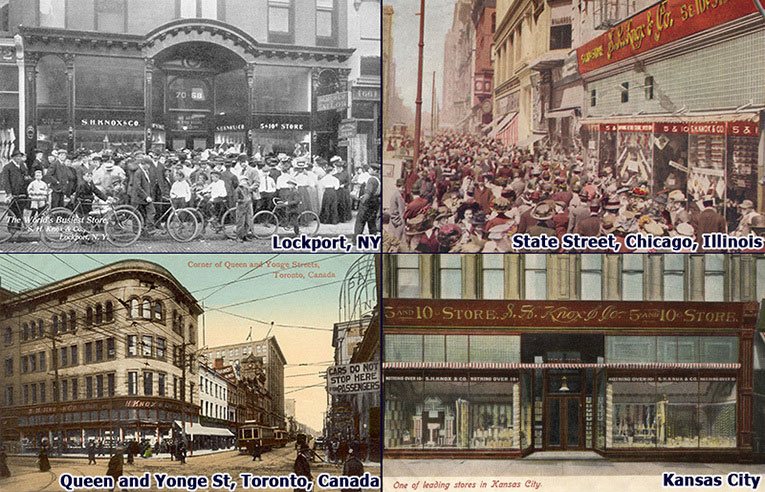 Success in the big cities brought increased confidence. In 1906 Seymour Knox joined other Syndicate members in incorporating his company. Shares were sold privately to family members and long-serving staff in a move intended to minimise the risk of a hostile takeover. Knox ploughed much of the money raised into a surge of store openings and extensions. By 1912 he operated 98 stores in the USA and 13 in Canada, and was the second largest company in the Syndicate after F.W. Woolworth & Co. 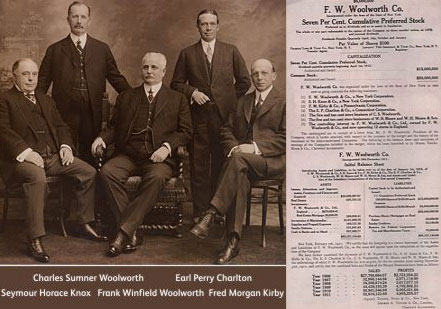 In 1911 Frank Woolworth suggested that the rivals should merge to form the largest store chain in the world. He felt it would be too large to be taken over, making it safe to sell shares on the stock market. A broker's preliminary valuation suggested that at least $50m could be raised by selling stock.

Controversially Woolworth insisted that the new firm must carry his name, and elect him President. Each of the other Founders would be a Director and SVP.

Knox's health was failing. The fifty year old had kidney disease and high blood pressure. The merger would allow him to cash in with an estimated bounty of over $10m. To agree he insisted on a guarantee for his people and that one of the new District Offices would be in Buffalo.

When F. W. Woolworth Co. was listed on Wall Street in January 1912, the offer was over-subscribed. It raised a total of $65m. The Knox stores were valued at $12m, which softened the blow of losing control. Seymour Knox used some of his windfall to fund the Knox Memorial Central School Building in Buffalo, It was inaugurated on 30 July 1913. He also invested in several high profile initiatives to develop enterprise and civic pride in Buffalo. To this day he is celebrated as one of the City's great pioneers and benefactors.

Unable to slow into retirement, he also bought a controlling interest in the Marine Trust Corporation, which included both the Marine National and Colombia National Banks. He divided his time between Chairmanship of his new acquisition and his duties as a Director and Senior Vice-President of Woolworth's. Company records show that Knox's expertise helped to drive a plan which saw the chain open a remarkable 404 North American Stores in the five years after flotation, with a further 50 in the UK.

Knox succumbed to poor health, passing away at home on 16 May, 1915. Frank Woolworth was shocked that such a vibrant and energetic man could be struck down at just fifty-four years old. The same sentiment was reflected across more than 700 stores in the USA and Canada. All chose to close their doors for the funeral. Frank Woolworth gave a eulogy about his long-time friend, telling mourners that Seymour Knox was "a prince among men". Grace Knox took steps to establish an Endowment Fund at the University of Buffalo, giving the inaugural $250,000 in her late husband's memory in 1916.

Knox's son and grandson, Seymour Knox II and III, served as Woolworth Directors, helping to secure his legacy in a line of continuity of over sixty years in the Boardroom. Today some former Knox stores trade as branches of Footlocker, the modern trading name in the USA, and his endowments provide an enduring memorial to a great pioneer of value retailing.