In its 99 years in the British High Street F.W. Woolworth became known for the hyperbole in its advertising. But one seemingly over-blown claim had some merit.

When, in 1985, signs proclaimed "Woolworths is Christmas" some customers challenged the grammar ("surely 'Woolworths are Christmas'"), few questioned the underlying sentiment.

106 years earlier, across the Atlantic, the Founder had offered his first Christmas Decorations for sale in his original branch in Lancaster, Pennsylvania. The pioneering move had helped him to establish a market leadership that none could match. The chain retained its lead at Christmas long after its dominance on other ranges had waned. Woolworth's reaped the rewards of introducing decorations to many homes in the USA, Canada and the British Isles. It had a unique expertise in seeking out the best designs from around the globe and offering them cheaply to the mass-market.

Our Christmas Gallery tells the story of the Decorations, Cards and Wrapping Paper favoured by five generations, along with the music, gifts and marketing that went with them. 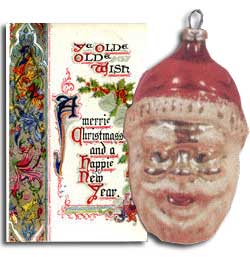 A Century of Decorations

A window on Christmas past