In North America F.W. Woolworth entered the Thirties on a low. Its shares had suffered one of the largest falls in 1929's Wall Street Crash. Its President had borrowed heavily on his holding to finance a vanity building project and was facing bankruptcy. Its competitors had stolen market share by introducing higher priced 15¢, 20¢ and even 25¢ lines. And its British non-consolidated subsidiary's success brought nothing but worry, as it flouted American law and kept buying freehold properties. Tough challenges lay ahead.

Across the pond were four hundred highly profitable stores. Woolworth had become the UK and Irish Free State's leading retailer. It had plans to double in size again, holding its Threepenny and Sixpenny price limits by tightly controlling its suppliers.

In Germany the formula had taken hold. Plans were in hand to drop the 25 & 50 Pfg. maxima from new fascias as lots of new branches were added. The New York office was looking forward to a major and escalating profit stream from its GMBH investment.

By 1940 Europe was at War, with Britain supported by Canada and the rest of its Empire. Woolworth UK was listed on the London Exchange and had continued to blossom. Its flotation had restored the fortunes of American investors.

The 5 & 10¢ and 25 and 50 Pfg price limits had been abandonned completed, while the UK's 3D and 6D had endured. Profits from Germany had ceased up after Hitler prohibited foreign control of businesses. The shortfall had coincided with new labour laws back home which forced costs to spiral. Despite this, the parent's fortunes in the USA were looking up and hopes were high for the Forties. 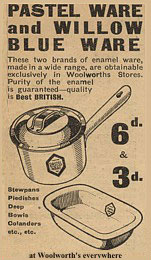 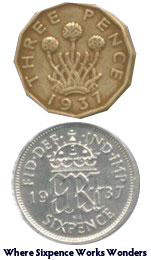