This page explorers the pivotal role that the Augsbury and Moore Dry Goods Store in Watertown, New York, played in shaping not only the F.W. Woolworth Co. but also its senior management. During the 1870s and early 1880s it provided management training for would-be five-and-ten magnates, and ultimately became a dimestore itself.

Augsbury and Moore of Watertown 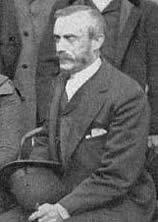 William Harvey Moore (right) gave Frank Woolworth his first retail job at the Dry Goods Store which he co-owned with Morgan Augsbury. A friend had wangled the interview for the 21 year old at the fancy shop on American Corner in Public Square, Watertown in Jefferson County, New York. Augsbury had rated Woolworth "too green", but had left the choice to his partner.

To seal the deal the would-be novice offered to work free for a three month apprenticeship, in exchange for board and lodgings. Moore believed training would take longer, and accepted Frank's suggestion that he should be paid $3.50 a week from the fourth month. Pay or not, he had escaped the family farm!

Frank started on Monday March 24, 1873, becoming a clerk and general dogsbody. In the weeks that followed, the tall, lanky, awkward clerk tried Moore's patience. Even he said he was useless! 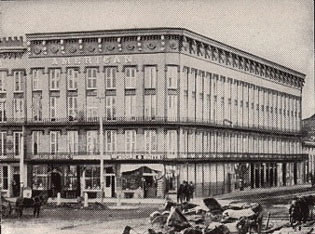 Augsbury and Moore was one of Watertown's flagship stores. It sold a range of fashions and household items to an affluent clientele. They expected attentive personal service and a bright tidy environment. This was hardest to achieve on the busiest day, when the local landowners and tenant farmers took their cattle and crops to market, and brought their wives to town.

At the time it was considered too vulgar to display product prices. Instead people had to ask. Clerks sometimes set the price to fit the person! The farmers' wives made the young Woolworth nervous. He kept interrupting his boss. "How much is this, Mr Moore?", he asked. "Look on the label" came the reply. "Do we sell gloves?"; "You're looking at them!"

On his first day Frank didn't even notice the office where all payments were taken, even though he had seen Moore sitting on a high stool at a sloping desk with a cash box.

Moore soon lost patience. To get his new clerk out of the way, he was assigned stockroom duties. The apprentice was tasked with unpacking the goods and disposing of the waste. He was also expected to set up displays out-of-hours. He excelled. Much later he described this as the best possible training.

The behind-the-scenes work gave Woolworth the chance to learn about product selection. As he unpacked, he inspected everything carefully, reviewing the invoice and packing slip as well as the item. He also honed his display skill, developing a unique look. The clerk's striking, bright red colour scheme was destined to become a hallmark of the Woolworth 5 & 10¢. The store became his crucible. The friendships he made with his co-workers would serve him well. Most early Managers and all but one of the five-and-ten's founders started out at Moore's. But in 1873 no-one thought Frank would last the day!

As soon as he turned twenty-one in the Spring of 1878, Frank's brother Sumner (C.S, Woolworth) joined the team at Moore's. By this time Morgan Augsbury had moved on to his next venture and Moore had become the senior partner alongside Perry Smith. The two brothers struck up a friendship with another apprentice Fred Morgan Kirby, who later became a business partner. In 1878 four of the six principals of the F. W. Woolworth Co., worked side-by-side at American Corner. One was Moore himself. 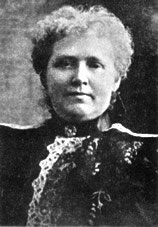 One day a shy Canadian girl called at Moore and Smith. Jennie Creighton offered to do sewing, alterations and repairs for customers, and asked if she could help out in the store on busy days. As the weeks passed Frank overcame his natural reserve with the ladies to ask the newcomer to step out with him.

When Frank was taken ill, Jennie volunteered to nurse him back to health. Love blossomed. The two were married on June 11, 1876. Jennie supported Frank throughout his life, encouraging his ideas, keeping him fit and keeping his feet on the ground. Despite immense wealth later in life, she treasured the days in Watertown as her happiest, when times were hard but life was simple. On busy days she helped her husband and brother-in-law to finish up their chores. 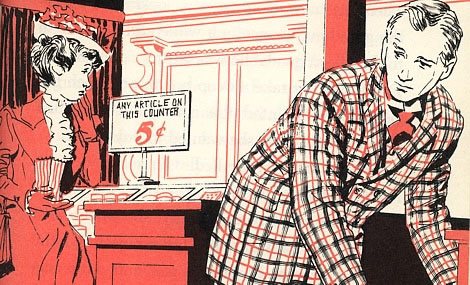 Jennie supported her husband as he stayed late each night to adjust his five cent table. She admired his determination to make a name for himself. Despite a young family, she encouraged him to strike out on his own, taking in mending and stretching the pennies until the Woolworth five-and-ten became established.