This page tells the story of the promotional display that inspired Frank Woolworth to open his own shop. He never claimed credit for the concept that lay behind his five and ten cent store. 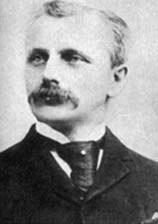 In Winter 1877 times in America were hard. The country was still recovering from the ravages of civil war, with weak infrastructure and much damage to repair. The population was expanding rapidly, but disposable income per head was falling. The shop where Frank Woolworth worked, Moore and Smith, was really feeling the pinch with a surplus of $35,000 of unsold stock.

Frank had spent a time away from Moores - first taking a job with A.A. Bushnell, a rival store, then recovering from illness on the farm. William Moore had missed him and his spectacular displays and had hired him back on the princely salary of $10 a week. But as times got hard he demanded that staff members accept pay cuts, asking Frank to settle for $8 a week. The reduction came at a bad time, as the Woolworths were expecting their first child. 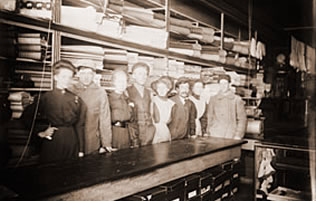 As fate would have it an old friend came calling at Moore and Smith. Mr. Golding had once been Head Clerk at Bushnells across Public Square, Watertown, before leaving with a co-worker, Ed. W. Barrett, to set up a "99¢ store" in Port Huron, Michigan. Frank listened in on the conversation.

William Moore admitted times were hard; Golding responded with news of his progress in Port Huron. He and Barrett had come across a salesman called Joseph C. Bennett, who had devised a novel way of clearing surplus handkerchieves from one of his suppliers. He had put the job-lot on sale at 5¢ each rather than 20¢. Every item sold out in no time!

William Moore appeared unconvinced but made a point of finding that the supplier was Spelman Brothers. He asked how the goods were displayed, Golding told him they were sold from a table at the back of the store with a sign reading "Nothing on this table over 5¢".The display in Bennett's store had also included "Yankee Notions" like pots and pans, napkins and combs. Even at 5¢ these items had good margins.

The 99¢ men had made it policy that if an item on their shelves had become dusty, it wasn't selling and needed to be cleared; this would be done, by moving it to the fixed-price table. The first day of the table had been their best for ages and had turned stock into the cash needed for wages and bills. Spelmans, said Golding, now stocked a big 5¢ range. Moore agreed to think about it, and later discussed it with Frank Woolworth, who was very enthusiastic. Against the backdrop of difficult times, they resolved to give it a go.

Woolworth was put in charge of the table. It was displayed during the Watertown County Fair - a high point of the Jefferson County social calendar.

The goods arrived with a week to spare. Woolworth prepared a smart display, as Fred Kirby watched on. To supplement the special buys, Moore had extracted slow moving lines from around the store. To complete the display Frank prepared a neat cardboard sign, which he suspended from the ceiling. It read "Any article on this display 5¢".

The feature consisted of two old sewing tables butted together in the central aisle. Each measured about 1.75m by 0.6m. Woolworth had draped it in red cambric. The products included:

The 5 cent table was an instant hit, with word getting round town that the Moore and Smith store had exceptional bargains. This generated a steady stream of customers throughout the day. The assistants were rushed off their feet. By closing time the display was almost empty. Moore sent Frank running to the Western Union office above the store to telegram a repeat order from Spelmans. Woolworth later recalled: "The goods vanished like snow in April ... Immediately things began to happen. Like magic, the goods on the '5¢ counter' faded away and money flowed into the cash drawer."

After a while sales started to dwindle. Moore assumed that 5 cent merchandise worked better when offered from time to time, but Frank had another assessment. He observed that Spelman had filled the store's repeat orders with items of lesser quality. Over time the poor items had clogged the display. The proposed Woolworth remedy was to clear the remnants in the wholesale orders that the store had started to supply to other local merchants.

Sales rallied, but Moore harboured reservations about carrying a regular range of five cent lines. He feared that the bargain table might undermine the store's upmarket image. Frank understood the quandary and wondered whether a store could prosper just on the sale of five cent goods. He asked Moore for advice on how much stock would be needed to fit out a five-cent store. Moore believed that the idea had potential and estimated that $300 would be needed for stock, fixtures and advance rent.

Frank was undaunted by Moore's figure. He set his heart on giving the idea a go. He asked his most affluent relatives if they would bankroll a venture. His progress is described in our next feature.