Before trading could begin in the British Isles some key decisions had to be made. They had to determine how the stores would be organised and what their relationship would be with the Founder's American business. The Pioneers also needed to be rewarded for the risk that they were taking in leaving established jobs and relocating 3,000 miles away from home.

Despite this being his first overseas venture, Frank Woolworth was clear that he wanted a proper company with Articles of Association, Share Capital and impeccable book-keeping. To achieve this he set about structuring F.W. Woolworth & Co. Ltd. of Great Britain.

Structure of the British business

While scouting the country for possible store locations, the Woolworth party made London their headquarters. Frank and Jennie Woolworth set themselves up in style at the Carlton Hotel in Pall Mall, (then one of London's finest,) joined by their daughter Edna. Meanwhile the boys (Fred Woolworth, Byron Miller and Samuel Balfour) headed for The Waldorf Hotel in Aldwych. Before long there would be another pioneer among their number.

Frank Woolworth felt that one of the reasons that his team was getting such a hostile reception in the UK was because they were American. "I remember one day we were lunching in the Strand", recalled Byron Miller, "and fell into conversation with a man from the States, manager of one of the early picture houses. He made a scraping gesture with his thumb and forefinger and said he was in England for just one purpose, to get all he could out of the 'limeys,' and supposed we were there for the same reason. Woolworth denounced such an attitude as wrong and pointed out to us that this type of American was largely responsible for creating the prejudice we found ourselves facing. This prejudice was so strong that we sometimes met personal abuse."

Frank Woolworth had a plan to tackle the resistance. He resolved to add an Englishman to his top team. He had a candidate in mind, choosing a young man who he had dealt with as a Buyer, and who he considered commercially astute and disarmingly charming. William Lawrence Stephenson worked as an Assistant Buyer and Logistics Manager for John Wanamaker's European sourcing operation, which was led by Edward Owen and based in Birmingham.

Frank sent a carriage from his London hotel with a message for Stephenson. The handwritten note read: "Please join me for dinner in London to discuss a matter that may be to your advantage. F. W. Woolworth." Stephenson was intrigued. He boarded the carriage without hesitation, He had enjoyed dealing with Woolworth, who he admired as a tough negotiator and a true innovator.

At his retirement dinner many years later Stephenson described the events that followed. Mr. Woolworth had been candid, saying "Risk everything and join us and you may retire a very rich man ... or you may end up with nothing." He told his audience "I was let in on the ground floor and never regretted it". The British pioneer became a legend in his own lifetime, admired across the stores in the USA for "entertaining royalty on his yacht". He ultimately left an estate valued at £3,389,636. 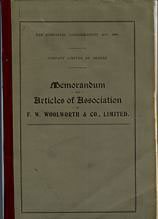 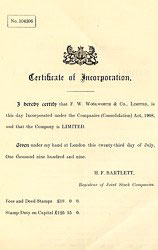 The Woolworth pioneers arranged to meet with a British solicitor to write the Memorandum and Articles of Association needed to apply to become a British Company under the Companies (Consolidation) Act, 1908. They hired the local solicitor Tom Lamartine Yates, to guide them. The lawyer had well-appointed offices in The Strand, London, WC2 and commuted daily from Morden, Surrey.

Woolworth did not know it at the time, but his Solicitor's wife, Rose, was a leading suffragette and is remembered today as one of the brave Edwardians who secured the vote for women.

Lamartine Yates took the pioneers step-by-step through the process of setting up a company. Among other things they had to declare a purpose for the new enterprise, including an exhaustive list of all the lines of business that the firm might undertake. Here are some of the things that they came up with:

Over the store chain's 99 years in the High Street it was remarkable how many of these things the company sold at one time or another. The chain sold virtually all of the products listed (including several motor cars in 2006), bought live cattle, lent people money (through a full credit centre operation) and even launched Kids First as an independent charity with its own Trustees. In a cruel twist of fate, it was only the Administrators who had their own version of a Woolworths Funeral Service and an abattoir for the long-serving and dedicated staff.

A Government official signed the incorporation papers on July 23, 1909. Frank Woolworth noted in his diary that he was glad he wasn't a superstitious man. At the time Americans called that date "Skidoo Day", which they considered profoundly unlucky. Usage of the word faded out in the second half of the twentieth century, but loosely translated it meant "run away as fast as possible", "sink without trace" or "abject failure"! One suggestion for the choice of 23 is that in Charles Dickens' Tale of Two Cities Sidney Carton was the 23rd person to be executed on the 23rd of the month. 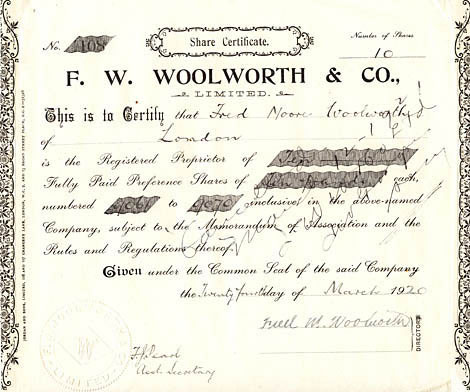 The second challenge for Lamartine Yates was to set up the share capital. F. W. Woolworth & Co. Limited was to be a private company ( one where the Board decides who may own shares), with a golden share retained by the US parent. This made the set-up quite complicated.

In the ensuing 20 years the Directors regularly traded shares among themselves (with the values rising very rapidly) and rewarded the most successful store managers with the right to buy five or ten shares. The dividend on ten preference shares by 1920 was £300, a year's wages for a Shop Assistant.

As you will see in the other galleries of the Woolworths Museum, despite many changes over a century in the High Street, at parent company level the British Woolworths recorded a profit in all but two years of trading - the first and the last. Over 99 years the shares paid dividends of £710,100,000 - a 1,359,143% return on the original share capital. But even this track record was not enough to save the store part of the company when it lost its way in the 21st Century.