It is hard for any multi-site retailer to expose its full range for sale if its stores vary in size.

By the 70s the biggest Woolworth's in the Mander Centre, Wolverhampton was 35 times larger than the smallest in Dawlish, Devon. And its huge Woolco stores were offering new ranges like Ladybird Clothes which had never been offered in the High Street branches.

A catalogue had the potential to cherry-pick the best of the large store ranges and make them available to shoppers in smaller communities. In the twenty-first century this concept became known as 'elastic walls' and was presented as a new idea. But its roots lay forty years earlier, on the pages of the much-loved and sadly short-lived Shoppers World. Its first catalogue store opened when Argos was still the Green Shield Stamp Redemption Centre.

Woolworth invested heavily to computerise in the 1960s. Most of the systems deployed in the UK were hand-me-downs from the parent company in New York. A key objective of the stateside work had been to make the broad range from the new Woolco superstore available more widely.

The first manifestation of the new capabilities was a new 124 page mail order catalog(ue) which was published in Autumn 1968. Shoppers could collect their purchases at any of the giant Corporation's stores, or could choose home delivery in urban areas, or collection from their Post Office in more rural locations. 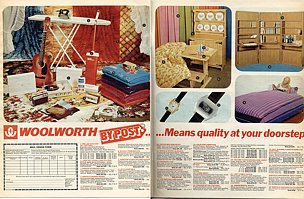 Good results stateside inspired baby steps in the UK. 32 years after publishing their last catalogue in 1940, in 1972 the London Board commissioned a Christmas advertising supplement in the Radio Times, the country's best selling magazine. The following Summer they took the next tentative step. Space was booked for double-page spreads of hand-picked products for home delivery in women's magazines as 'Woolworth by Post'.

Again the public response was positive, but this time it prompted a much more radical response.

Executives resolved to found a Catalogue Store Chain selling an extended range of large and higher-priced items. It would draw products from the largest Woolworth and Woolco stores, topped up with lines sourced by its own Buyers. To reduce risk a collaborative parternship was agreed with the Canadian Woolworth Company.

In 1973 Britain had no catalogue store chain. The redemption centres for Green Shield Stamps and for cigarette coupons had set the way, particularly after the Kensitas Cigarette Coupon Redemption Centre in London's Barbican began to allow smokers to 'top up' their coupons with cash to make more substantial purchases. The Green Shield Stamp pioneer Richard Tomkins soon adopted the same idea, later renaming his chain 'Argos'.

Without the cash top-up customers had needed to collect vast numbers of stamps over many years to get the largest items. For example 155 books, each containing 32 pages of 40 stamps (or 198,400) were needed to buy the showpiece Lambretta Model L1 150 Series 11 Scooter to the right hand side of the picture above. Typically participating supermarkets gave one stamp for every 2½ pence spent on groceries, while some filling stations offered quadruple stamps, meaning that with petrol costing 36p per gallon (8.5p per litre) a fill-up would be rewarded with around 120 stamps. At these rates, to get a scooter a shopper would have to buy 1,240 tanks of petrol or spend £4,870 on groceries at a time when the average weekly shop was just £30 ! 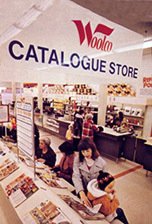 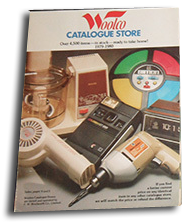 The Canadian Woolworth chose to re-use the name 'Woolco' for its Catalog Shop. Its 252 page book offered a range cherry-picked from the Department Stores. The store design comprised a small salesfloor with a large storage area behind the scenes. The prototype opened in Metro Toronto, Ontario. Over time the chain expanded to ten dedicated locations and seven shops-in-shops inside Woolworth.

London had reservations about the name, citing research which suggested that it would compromise the marketing of both chains. Its boffins proposed the name Shoppers World Discount Catalogue Stores. 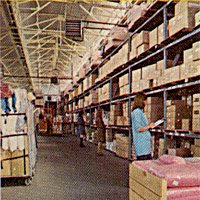 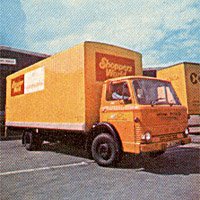 The new chain's executives were given space at Woolworth's Marylebone Road headquarters, while most of its central personnel were based at a new, dedicated warehouse and administration centre in Heywood, Lancashire (right), four miles from the main Woolworth depot in nearby Castleton, Rochdale. 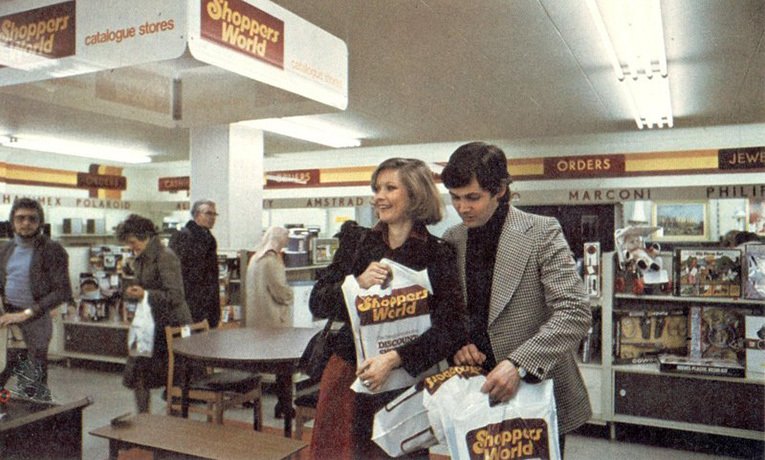 As the UK's first dedicated catalogue store, much of Shoppers World's work was ground-breaking. It borrowed design ideas from the USA and from its sister stores Woolworth and Woolco, building a modern, innovative and distinctive identity. The chosen salesfloor layout has stood the test of time, with an appearance strongly reminiscent of today's equivalents. The catalogue was cherry-picked to create glass cabinet and window displays showcasing the breadth of range and the most popular items. A bank of catalogues with plenty of space to browse was sited near the entrance. Shoppers paid at the adjacent cash desk, before picking up the goods in a collection area. A separate jewellery counter offered personal service so that shoppers could inspect items and try them on before making a selection. Credit terms were offered, spreading the cost over 1-4 years. Applications could be approved on the spot. Staff were encouraged to be helpful, showing any item on demand, and were trained to highlight the guarantee, which promised money back for any item returned within 14 days accompanied by the receipt and original packaging.

Specialists were contracted to lead the development of a 196 page full-colour catalogue, capturing product packshots and lifestyle images and crafting product descriptions. Based on experience gained in the USA, the page templates included spaces for supplier and product brand logos. Suppliers were encouraged to allow a comparison between Shoppers World and the recommended retail price. As the business became established suppliers competed for page space, and were rewarded with additional exposure when they cut prices. View an example page spread from the Shoppers World Catalogue. 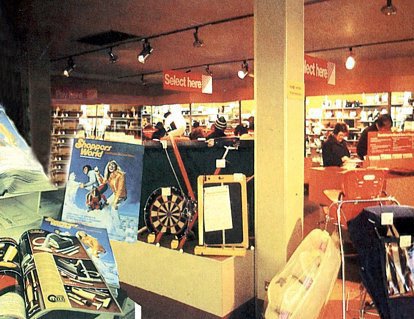 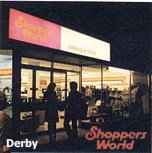 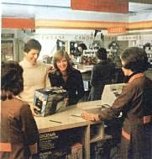 The business plan showed 100 stores would be needed to achieve an economy of scale and optimal profitablity.

The first 14 outlets, each hand-picked, exceeded their sales and margin targets. But Woolworth's funds were tight.

To maintain momentum, under-performing High Street stores were converted, and showrooms were squeezed into superstores. Meanwhile Argos chose its locations with greater care and precision. 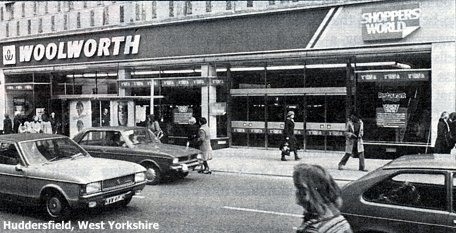 Placing two stores under one roof led to tensions between the staff. Some items were stocked by both chains. Canny shoppers sought demonstrations and expertise from Woolworth staff, before buying from the 'no frills' Catalogue Shop, saving themselves up to 20%!

At Huddersfield (left) they did not even have to go out of the door or take the stairs, as Shoppers World occupied the back wall of the main salesfloor.

To their credit, despite a tough economy and competing initiatives, the Board remained resolute. It held faith with Shoppers World and continued to refine and improve the format. By 1982 the catalogue operation had forty-five outlets. For the first time strong cost-control had helped the chain to break even.

But events intervened. Lacklustre trading performance, particularly in the parent company's US Woolco stores, led to the sale of the controlling interest in the British Woolworth to a consortium. One of the first actions of the new owners was to close the 'non-core' businesses as part of a rationalisation. Shoppers World was the first casualty. It was summarily closed, with many of its assets sold cheaply to Argos. To sweeten the deal, the competitor was also allowed to cherry-pick a group of freehold Woolworth stores.

Argos later faced competition from a similar venture, launched by Littlewoods. Index Catalogue Stores operated in a mix of freestanding premises and shops within shops, and built a strong customer base. When Littlewoods decided to move on-line, Argos was able to pick up the best bits of that rival too, before cashing in on the demise of its arch-rival, Woolworths. It is probably no accident that a number of their senior people started their careers at Woolies.

The management buy-out of 1982 also put paid to the joint development arrangement with Woolco Catalogue Stores in Canada. Shortly after the British sale was agreed, the Canadian firm dropped its catalogue store format, converting some of the branches to become compact Woolworth stores and closing the rest. Today, without the Woolworths Museum, you would struggle to find evidence on the Internet that the 17 strong Canadian venture and the larger British operation ever existed. Their contribution to retail history would be lost. As with many of its ventures of the era, Woolworth took the pain while others got the gain.