One of the ultimate ironies of the Woolworth company is that in one and the same year, 1997, the parent company decided to retire the format having failed to turn it around, while one of its former employees, Roger Jones, was able to take the helm in London, restore many of the retail disciplines that he had learnt early in his career, and deliver the best ever year's profit, exceeding £100,000,000 for the first time.

A modest man, Jones described the feat as nothing more than "doing the basic job well". He had followed the age-old principles of the Founder, Frank W. Woolworth, in stamping out waste, improving customer service, filling the shelves and keeping the range on sale and, from time to time, offering jaw-drop prices that competitors couldn't match.

It was a case study in how to manage a retail business, which his successors failed to comprehend, despite establishing him as the most admired person in Kingfisher's worldwide business.

News of another reshuffle in the Boardroom amused many media commentators. One observed that perhaps the new neon fascia on the Marylebone Road headquarters, which had been installed at the request of the MD Jonathan Weeks, was intended to help new Directors to find their way to the Boardroom and to make it easy for the 'dear departed' to exit through the revolving door. However most journalists were impressed by Sir Geoffrey Mulcahy's choice of MD. They acknowledged that he had found the perfect man for the job.

The Kingfisher CEO had coaxed Roger Jones out of retirement. Roger had served Woolworths for more than thirty-five years, rising rapidly from Trainee Manager to Store Manager, Superintendent, and then Regional Manager before becoming Joint MD in 1981. The sole Boardroom survivor in the Paternoster (Kingfisher) takeover of the business in 1982, he had distinguished himself as an effective Administration Director, as well as serving on the Board of the Property Company, Chartwell Land. Time and again his encyclopaedic knowledge of the real estate and ground-up retail experience had proved invaluable.

As a reward at the end of a long career, after retiring from Woolworths, Jones had been appointed MD of the Entertainment UK wholesale subsidiary. He excelled. The long-term rivalry between EUK and the High Street stores was quelled as Jones insisted on co-operation. Strong sales and profit growth followed. This prompted another step-up, as Jones took the helm of the 770-strong Health and Beauty Chain, Superdrug. Again profits grew, as the new leader shaped a more cohesive and confident Board. He was given a spectacular send-off by a grateful workforce when he announced plans to retire for the second time.

Weeks after stepping down the CEO approached him again, with an offer of the only job likely to lure the veteran director off the golf course. He was tasked with doing the impossible and restoring the fortunes of Woolworths. Mulcahy made no secret that the High Street chain had become a major cause for concern, with profits in free-fall and no clear strategy or direction. Jones accepted. The City strongly welcomed the appointment, as the stores greeted their new MD as an old and trusted friend. Everyone was keen to please their new boss. 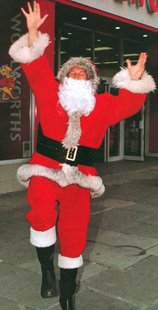 The Jones formula was remarkably simple. He sent everyone 'back to basics', demanding tigher retail disciplines in the stores, buying departments and in the supply chain. Sales promotions were sharpened, with a strong focus on price competitiveness. The 'Street Value' advertising made way for a series of traditional commercials for 'Woolies Winter Wonderland'. It proved to be the most effective campaign for years.

The MD explained that he did not want any new initiatives until his back to basics policy had stabilised the ship. He demanded that the stores deliver the formula with excellence. He expected the Head Office team to guarantee consistent availability, and to get the range delivered to stores on-time, every time.

To help secure the crucial Christmas business and avoid a recurrence of the problems of the previous year, he redeployed an old friend. Roger Stafford was a second generation Woolworth Man who had been an effective Store and Area Manager, before taking on the buying for the chain's Christmas Ranges. He became 'Christmas Project Manager', with a remit of 'everything'. The role was soon nicknamed 'Father Christmas'.

Stafford used his extensive operational experience, built up over more than thirty years with the firm, to ensure that Head Office instructions were written in a way that stores could carry out, and that newcomers in the office understood the store timetable and what needed to happen when.

Jones was determined to halt the labour turnover that had dogged the firm's Head Office throughout the decade. He actively encouraged recruitment from within, particularly from Store and Regional Management into Head Office roles. This boosted morale in the field and, to the surprise of many of the newcomers at headquarters, the new recruits also showed their worth, with 'do-able' instructions and an insight into how get the stores on-side. Profits leapt forward in 1995/6 and 1996/7 as the new policies took effect. With the retail disciplines restored, the MD turned his attention to a series of change projects.

Roger Jones and his Board updated the strategy. They did not opt to reinvent the brand from scratch. Instead they aimed to build on the strengths and tackle the weaknesses of the 'Focus' strategy from the Eighties and refine it for a new generation. Studies showed there were three distinct types of location, where customers had different needs and expected a different range and store layout.

To put this into effect, the firm cast a dragnet for new products for its larger stores. In parallel a major initiative worked to spruce up the smaller stores and squeeze in a larger range. Results from the so-called 'intensification' and facelift came through quickly as sales and profit grew rapidly after the work.

As a prototype, the City store at Regent Street, Swindon, which had been one of Frank Woolworth's first and favourite locations, was relaid, with new products and a new look. Unlike the work at Hounslow in 1994, the transformation was achieved cheaply and the result was spectacular. New ranges included a large cookshop, displayed on wooden tables as well as regular counters. It offered a more fashionable range, including kitchen appliances and a wider selection of china and glassware. Kids ranges were moved towards the front of the dual entrance store, in a carpeted area to the left hand side of the main gangway. The restaurant was moved down to the ground floor and given a new look. Swindon had the look and feel of a modern department store. The idea was repeated in Doncaster, Yorkshire and was refined further in the branch in the Arndale Centre at Luton, Bedfordshire.

Behind the scenes structures were changed so that the City stores could be managed separately. This acknowledged the different challenges that they faced, and enabled the pooling of ideas. The scheme showed that improvements did not require vast financial investment, just good management. 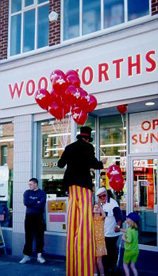 For market towns, the new Heartland store formula also included the Kitchen shop, improved displays of Toys and Kidswear, as well as new third-party ranges that could be delivered quickly and cheaply. Video rental brought a new dimension, complete with the obligatory chute at the back of the stores to return tapes out of hours. The stores also offered a dry cleaning service. New products included Petcare, an extended offer of home cleaning products, and a welcome return for a limited range of toiletries after a year-long absence, as well as Newspapers and Magazines.

Results in three pilot stores at Boston and Grantham in Lincolnshire and Huntingdon in Cambridgeshire were encouraging. The branches were revitalised at comparatively low cost. The solution was subsequently refined at Chippenham. The Newspapers and Magazines proved a particular hit and later appeared in many stores. 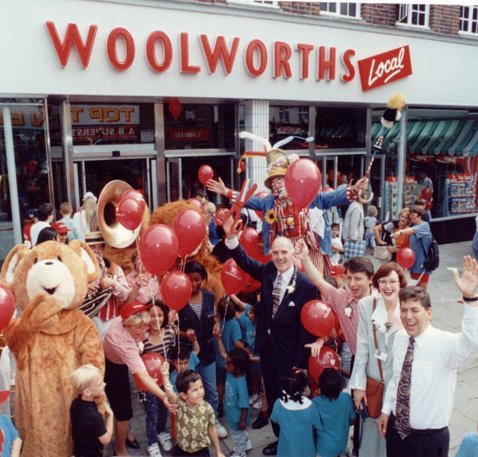 The most succecssful of the revitalised stores was the Woolworths Local format. The product selection was increased by extending the back counters upwards and condensing the displays. The changes were cheap to make and allowed the stores to offer up to 4,000 additional lines.

Thought also went into simplifying the operation of the smaller stores. Managers' offices were moved to the salesfloor, so that they could oversee the operation from a raised platform, which was nicknamed 'the Manager's Pod'. The approach kept a pair of eyes on the floor to keep shoplifting under control.

Both City Analysts and shoppers responded favourably to the layout, which they felt had moved the offer on and brought the 89 year old company back up-to-date. 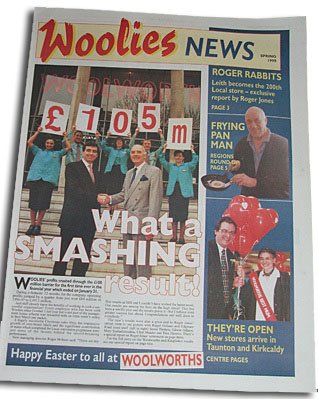 During his second spell as MD, despite criticism from some quarters of his caution and lack of long-term vision, the results spoke for themselves. Profits doubled, a quarter of the stores were modernised and plans were in hand to tackle the rest and to progress a new strategy. All in all, this was a fitting culmination to a career of 44 years with the business.

For the final year Woolworths had two Rogers at the helm, as long-serving Jones handed over the reins and shared his expertise with up-and-coming Kingfisher star Roger Holmes, who was tasked with taking the brand into the third millennium. 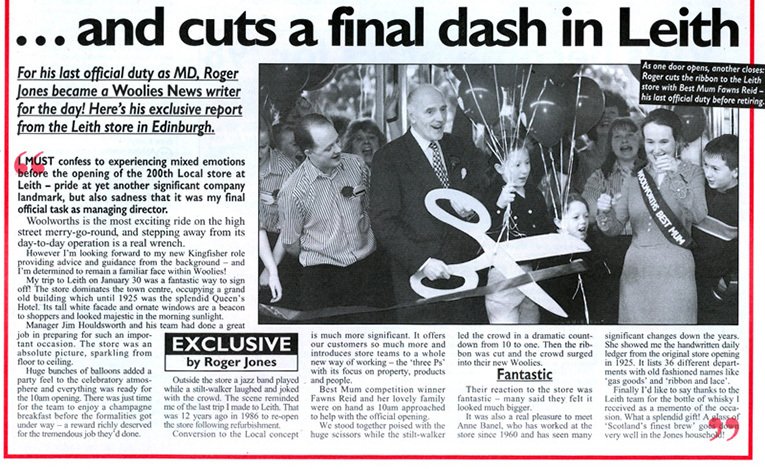