The immediate priority when the UK Woolworths demerged from Kingfisher was to steady the ship. The lengthy separation process had taken its toll.

The new Chairman and FD had to tackle the debt dowry from the former parent, and found much more competitive financing. They also raised money by clearing old stock.

Before choosing a new CEO, they arbitrarily decided to dump some of Kingfisher's initiatives. Big write-offs resulted from the decision to scale the e-commerce ventures right back, while plans for further General Stores and Big W branches were also reined in.

It fell to the new CEO to devise a strategy. Within weeks of his arrival Woolworths embarked on a new and radically different course, which redefined product range, targeted a much narrower group of customers and which was heavily oriented towards the larger stores. Analysts loved the vision, while shoppers had their doubts.

New values and a new target customer for the third millennium

As the Chairman, Gerald Corbett, cast a net for a new CEO, his FD Chris Rogers secured improved financing for the new Group. He also initiated a clearance programme to turn old stock into cash.

Weeks after leaving Kingfisher the pair had to present half-year figures for the final trading period. These revealed the destabilising impact of the lengthy separation and the challenges that lay ahead. 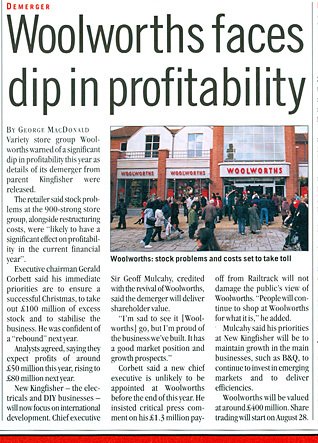 Investors and City Analysts were told of weak stock management disciplines and severe overstocks at Woolworths. These would be a priority. Theere would be a number of exceptional charges at the year end, relating to the lengthy demerger process.

The initiatives that Woolworths had managed on behalf of Kingfisher would have to be revisited. The priority was to agree supply terms with B&Q for Big W and with Superdrug for both Big W and Woolworths General Store. It was not possible to decide a strategy for either until the supply lines were secure. In the meantime openings would continue on interim terms.

In response to questions from the floor, they confirmed that the selection process for a CEO was progressing. Three internal candidates had come forward. Each was a Managing Director of an established Woolworths Division. They were also looking outside. If an outsider was selected, he or she might not be able to start until the following year because of their contract terms. In the interim Corbett would work full-time and take the helm.

They were however able to announce several appointments. Marketing Director Ken Lewis would move to become Commercial Director, with his role taken by Trading Controller Octavia Morley. They would join the existing MDs and the Retail Director, Steve Lewis on the Board. 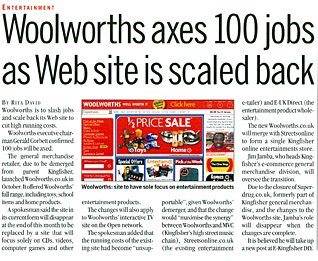 Corbett outlined his first executive decisions. The move into new channels did not seem viable and would be scaled right back. The Direct catalogue would be dropped, and the alliance with Freemans would be terminated. The fulfilment warehouse in Braunstone, Leicester would close and the Head Office team would be disbanded. Regretably 100 would lose their jobs.

Rather than close the website, he got the Streets Online subsidiary to 'skin' their existing Entertainment site to appear on the Woolworths URL. Another Group Operating Company, Entertainment UK would handle fulfilment.

These moves would generate a £10m exceptional item at year end. The Board had endorsed two other initiatives inherited from Kingfisher. The till replacement project, Kingstore, would continue, as would the implementation of a SAP Retail Enterprise System. 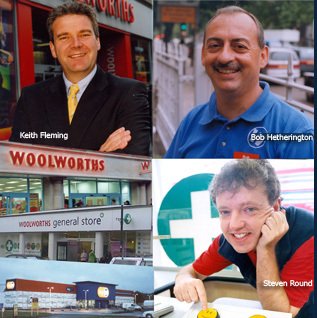 Corbett concluded none of the internal candidates would make a good CEO. Neither the popular Keith Fleming, who had excelled in the High Street, driving up standards and improving morale, nor Bob Hetherington, the evangelist behind Big W, with his experience at world-class Walmart, or Woolworth and Woolco in North America, nor even the young and dynamic Stephen Round was considered suitable for the job.

Corbett preferred Trevor Bish-Jones, the up-and-coming MD of Curry's, who had launched 'The Link' for Dixons Stores Group after working his way up at Boots. The two had worked together at Dixons, where it seems that Bish-Jones had shown real potential.

The appointment was trailedl in advance. City rules required a spell of 'Gardening Leave' before the new CEO could take up his post in 2002. 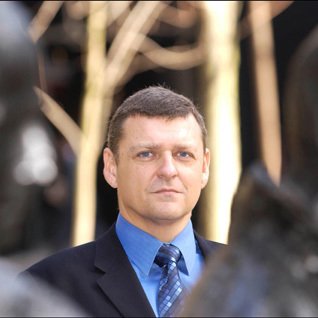 Despite sadness for the well-loved MDs, colleagues warmed to 'TBJ'. The affable and indefatiguable CEO captured hearts and minds by engaging colleagues at all levels and by explaining issues in simple terms. A good motivator and an optimist, for Bish-Jones no problem was insoluable. City Editors were to dub him 'the nicest CEO in British Retail'.

The new appointment followed a long period of uncertainty. The MDs jumped or were pushed, followed over the next eighteen months by forty out of fifty top executives. Most had been lured by rival chains, particularly supermarkets trying to break into General Merchandise.

As a result, for the first time, not a single member of either the Group Board or the Board of Woolworths, had ever worked in one of the High Street shops, or even in Area or Regional Management. Most had joined at the top, directly from outside. Ironically three of the Directors, Corbett, Bish-Jones and Lewis, shared a common career path, each working for the one-time arch-rival of Kingfisher, Dixons Stores Group. A fourth, the FD Christopher Rogers had also cut his teeth in the electrical sector. 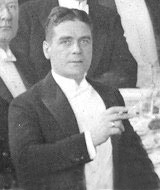 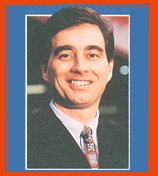 Bish-Jones considered his immediate challenge to be the formulation of a new strategy for Woolworths. Many years earlier, William Stephenson (a Director from 1910-1947) had 22 years to prepare for the helm.

Even in the 1990s, Roger Holmes, trained as a Consultant by McInseys, had a year to acclimatize and learn before taking the reins from the most successful ever MD, Roger Jones. 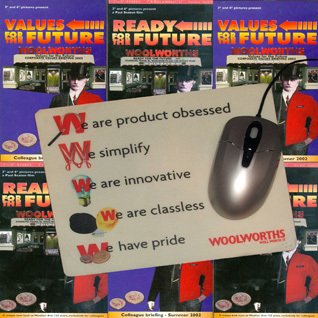 To help shape his strategy, Bish-Jones sought to establish a set of core values. He explained to his fellow Directors that these should be encompass the ethos of a firm over many years, remaining constant whatever the strategy.

The writer was invited to suggest values from the history and to share a potted version of the heritage with the new Board. The Directors chose five values from a list of proposals. These were 'we are product obsessed'. 'we simplify', 'we are innovative', 'we are classless' and 'we have pride'.

Bish Jones gathered the entire office staff to hear the new values and his strategy on 14 June 2002. The session was followed by roadshows which conveyed the same message right across the workforce. 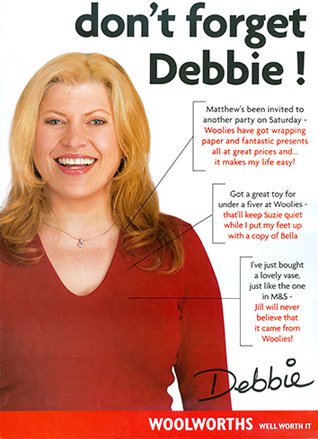 The CEO went on to set out a radical change to the trading formula. He argued that the offer had become confused. After 93 years as 'the everyday store for everyone', the shops should target its buying to a 'core customer'. His research had pinpointed a key group which accounted for the lion's share of turnover.

All of the merchandise, and the store look, should be geared to 'Debbie' (right). She was typical of many 28-35 year old mothers of two, with one child at school and one at nursery. She worked part-time to help build a household income of £40,000. She was house proud and her children wanted for nothing. She relied on Woolworths for toys, clothes, educational items and finishing touches to make the family home special.

The layout of the stores and the merchandise mix should be updated. 'Kids and Celebrations' would get more space, comprising Toys, Clothing, Cards, Stationery and Entertainment. Displays of sweets would be condensed, while Home, Kitchen and Garden would be scaled back. Buyers should revisit every item to ensure that it would appeal to Debbie.

Bish-Jones planned to tackle the largest stores first, believing that these set the tone, and were important to analysts and investors. Later he would turn his attention to the out-of-town Big W outlets, leaving the 550 smaller local High Street stores until last. The best products and new ideas would, of course, be shared at once. 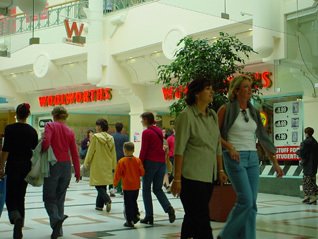 The TBJ values were well received. Long-servers agreed with the principles that they heard, without stopping to consider the parts of the formula that had been dropped. The Board had commissioned 30,000 copies of a company history film by the Virtual Museum author, Paul Seaton, which put the values into context. Every employee was given a copy to take home.

Old-hands were less sure about Debbie - regretting the passing of the 'everyday for everyone' approach, and harbouring doubts about Kids and Celebrations, which had marked similarities to a short-lived 'limited story' experiment in the Nineties. There were also some concerns that the new offer would be less appealing to men in general and especially to a loyal generation of older shoppers. But all thought the new CEO deserved a fair crack of the whip. 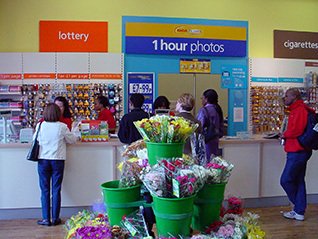 In answer to a question from the floor, the CEO revealed that he could not see a viable future for the General Store drugstore fascia. The new owners of Superdrug had other priorities and could not support the venture. Over time he planned to bring those outlets back to the main chain.

He also confirmed that multi-channel retailing would not be a priority. Fortunately the Group also included Streets Online, MVC and EUK. The woolworths.co.uk website would provide information for High Street shoppers and suppliers, and a store locator. It would also sell EUK CDs and Videos from a badged version of the MVC site.

Asked whether he was moving up-market, the CEO confirmed that Debbie's household income was higher than than the chain's previous assumpetions, particularly as she prioritised expenditure on her children.

Bish-Jones aimed to get his first new look store open in time for Christmas. He hoped that colleagues would find time to visit the Hemel Hempstead store and share their feedback. In the meantime everyone should think through what the new strategy and values meant for them, and start buying and working with Debbie in mind. He hoped that, with the strategy in place, he could soon drive the share price from the 29p when the chain demerged towards his goal of £1 a share, which would make Woolworths Group an FTSE100 company again.

The great majority of colleagues were happy to buy into the plan and awaited the store pilot with interest. Time would tell.