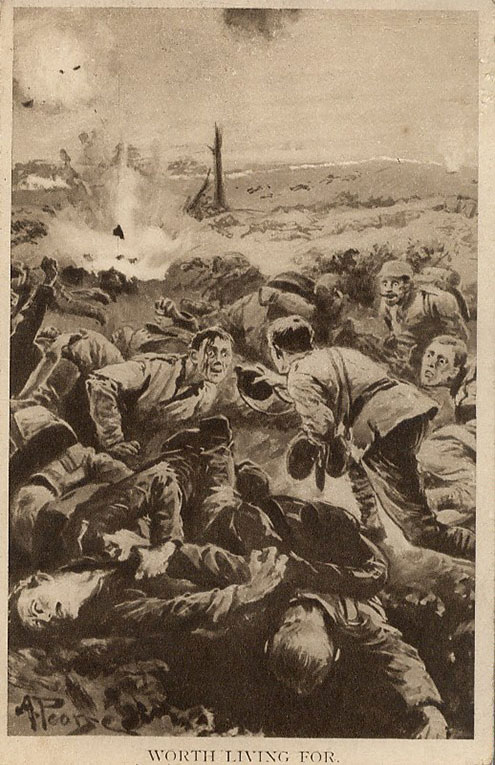 "Worth Living For " - Tribute to an Engineer's Bravery

The caption (which completely fills the traditional writing space) on the back of this card reads:

An eloquent tribute is paid by a wounded Corporal of the Bedfordshire Regiment now in the London Hospital
to a Royal Engineer who sacrificed his life to procure water for wounded comrades. He says: "There are so
many deeds of heroism performed it's hard to remember them all, but there is one that ought not
to be forgotten. Near to our trenches beyond the Marne there were a lot of wounded lying, and their
cries for water were pitiful. In the trenches was a quiet chap of the Royal Engineers and at last he could
stand it no longer. So he collected all the water bottles he could lay hands on and said he was going out.

The air was thick with shell and rifle fire and to show yourself at all was as good as signing your
death warrant. That chap knew it as well as we did but he didn't care and out he went. He got to
the first man alright and gave him a drink, but how he got there God alone knows for it was about
the awfulest thing you ever saw, and no sooner did he show up against the trenches than the
Germans concentrated on him. One bottle was shot out of his hands and I fancy he must have got
hit at once. After he had attended the first man he crawled along to another and another, and so on until
he was about a quarter of a mile from the trenches. Then he stood up to zigzag across to some more
wounded chaps and that was the last we saw of him. Just as he got upright the Germans must have
aimed another volley at him for he went down with just an upward throw of the arms."

Our picture by a well-known British artist illustrates another British act of heroism.*

*The two references to British in the final line may be explained by the fact that the
Woolworth's postcard buyer, John Ben Snow, was an American.