Making records in the 1930s

By the mid 30s Woolworth was selling over two million 78rpm records a week.

The staff asked their magazine to find out how they were made.

A writer for The New Bond duly obliged, visiting the factory and reporting what he found. Here is what he had to say. 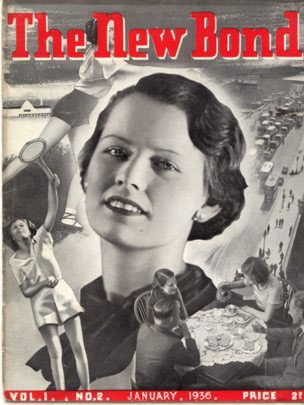 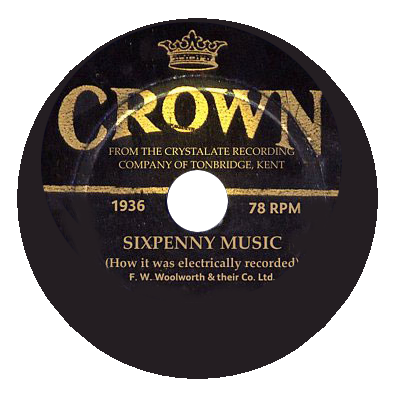 It is such a habit nowadays to play a record on a machine, and forget all about it, that we are rather apt to overlook the wonder which permits us to reproduce so faithfully the music of famous artistes. Perhaps it will be of interest to follow the life of a record.

Firstly, there is the important point of selecting titles.  Each month twenty to thirty-four Crown records are issued, and decided upon by a Committee, whose job it is to assess the commercial value of each of the hundred of numbers submitted to them by the publishers, and, by a process of elimination, work down to a reasonable number.  The number of times the tune has been broadcast must be considered, and whether it is going to be given a big air “plug”; if from a film, when the general release is taken place, and if it has a catchy melody and lyrics which can be easily memorized.The titles chosen, the artistes must be decided upon.  This is more difficult, as each number calls for individual interpretation.  Each gramophone company has its “stars” under contract, but many artistes record for other companies as well under a nom de plume.  One well-known singer adopted thirty-seven different names over a period of years for this purpose. 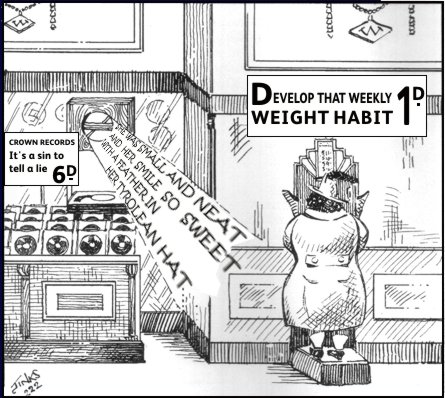 A date is fixed for recording, and the artiste (or band, etc.) comes to the studio completely rehearsed to take his stand before the microphone.  The studio is provided with large curtains and screens to give the best acoustic effects to each type of recording.  If it is a band record the recorder arranges their positions before the “mike,” and then in the recording room he listens to the tune from the “mikes” until he is satisfied with the balance.

Meanwhile corresponding sound waves have been set up, and these picked up by sensitive microphones and transmitted to the recording amplifier, and this increases the volume of sound until a finely balanced sapphire cutter is caused to vibrate accordingly.  The cutter rotates upon a heated wax blank, three quarters of an inch thick and a trifle larger than a record.  This is not suitable for production purposes, and a copy in metal is obtained.

A Crown record wax is first metallized by the latest scientific electrical process.  It is then placed in a deposition bath of copper sulphate solution, and connected to an electrical circuit as the cathode, while copper anodes maintain the copper in the bath.  Thus the wax, in the same way that a magnet attracts steel, attracts the copper in the bath, which flies to the metallized wax face.  After twelve hours a sheet of copper has been grown, and is known as the “Master.”  This sheet is stripped from the wax, and on it is the negative impression of the original sound wave grooves.  As the sounds stand up from the surface of the copper shell, it would not be possible to play this impression.  A great many duplicates are required to produce the large number of records demanded by the public, and therefore the Master is placed in the deposition bath and another impression is grown in the same way as before.  This is a positive, and again, by the same process, final working shells are grown.  These are “stampers,” and are therefore negatives.  To obtain the necessary thickness for production purposes, a copper back plate is soldered on.  From this negative stamper the record is pressed with positive grooves as on the original wax.

Pressings are not taken from the Master, because a knock on the working face would destroy the recording.  Fresh copies can be grown from the “Mother,” or positive, and if the latter is damaged, another can be drawn from the Master.  The average life of each stamper gives several thousand records.  The stamper then passes to the press room, where it is fixed in an hydraulic press together with the corresponding stamper for the other side of the record, one stamper being fixed to the bottom jaw of the press, and the other to the top.  Each is in direct contact with a metal die, which is a block of metal drilled to take a grid of pipes.  These pipes are attached to the heating and cooling system, and operated by a valve which at a given moment closes the steam and allows cooling water to circulate through the pipes.

Each pressman has a supply of record material biscuits, which are of the necessary size to produce one record.  The material is composed of shellac and a specially selected “filler.”  The biscuits are placed on a heater and brought to a temperature of 250°F., and the material becomes of a putty-like consistency.  The pressman places a label face downwards on the centre of the bottom stamper, puts the softened material on top of this, and the label for the other side of the record face upwards.  The jaws of the press are closed, one stamper being directly above the other, and the hydraulic pressure released, so that the bottom stamper moves towards the top with a pressure of a ton to the square inch.  At the same time the cooling water valve is operated, and the trapped material between the stampers is cooled down to a solid state.  After thirty seconds the pressure is released, the press opened and the record, complete with labels, ready for removal to the edging department, where the edge is removed.  Experts minutely examine each record for flaws, and if it is passed it is placed in an envelope and sent to the assembly department to await the order of F. W. Woolworth & Company.

It is perhaps of interest to note that if all of the records supplied to F. W. W. in recent years were placed edge to edge they would reach 5,500 miles, or placed flat one on top of the other, 73,920 yards into the air, or 42 miles.

[At the time of going to press we are still checking these figures !  -   ED.]

Playing in the background is one of our favourite tunes on Eclipse Records.
It was played for Woolworth's by the Band of the Arsenal Football Club
and recorded by Crystalate in Tonbridge, Kent in 1934.

It's called Blaze Away. The tune is by Holzmann.
And if you ever attended "Minor's Matinée"
you will recognise that this was the backing to the anthem:

"We are the boys and girls well known as
Minors of the A-B-C
And every Saturday we line up
To see the films we like
And shout aloud with glee.
We love to laugh and have a singsong
what a happy crowd are we,
we're all pals together,
we're minors of the
A-B-C"

To save an MP3 copy of 'Blaze Away' for later right-click this link and choose "Save as..."