By the mid 1930s Woolworth had built a huge record business across Britain and Ireland, thanks to their partnership with the Crystalate Recording Company. Working together the two firms had ridden the wave of technical innovation, building up from tiny five inch mechandically recorded discs to electronically recorded eight inch shellac records on the Eclipse label.

In 1935 they had another ace to play, stepping up to a nine inch record with a longer playing time. They marked the change by renaming Eclipse as Crown, and revealed new artists, including Ennis Parkes (billed under the married name Mrs Jack Hilton, to draw on the fame of her bandleader husband), and a popular young singer from BBC Radio, Vera Lynn. This added to the eclectic mix of hits songs, comedy records and popular standards and continued the longstanding policy of offering two popular songs for sixpence.

Sales of the new label records were phenomenal, but margins were extremely tight. A worsening political situation had led to rearmament and triggered an increase in the cost of raw materials. There was speculation that Woolworth might charge sixpence a side for the records, or perhaps sixpence extra for the hole in the middle. But ultimately the Board decided they would continue selling records only for as long as they could break even at their price maximum.

Over thirty months Crown issued some great records, many of which survive to this day. We're proud to feature our favourites here in the Woolworths Museum. You can play them on-line or download an MP3 for later. The price is sixpence lower than it was in 1937 when the final records came off the presses! 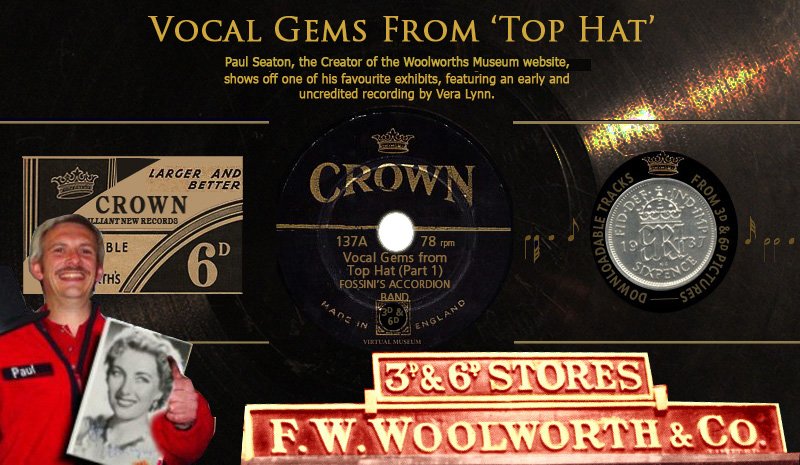 Download a copy of this song as an MP3

Please choose a Crown Record to play next using the menu below.