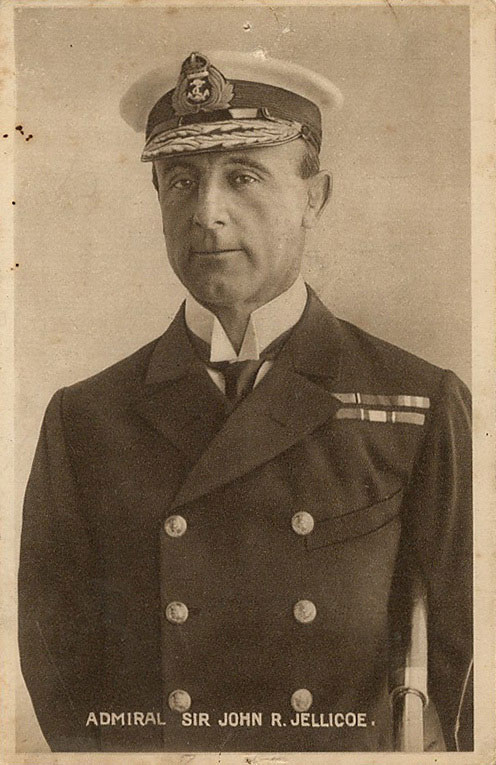 Jellicoe was a distinguished naval officer who earned the respect of the men of the Royal Navy. He strongly promoted good morale on-board ship and was anxious to improve conditions for the sailors under his comand. In his early career he participated in the relief of Beijing during the Boxer Rebellion, showing exceptional bravery under fire.

Jellicoe was one of the first to spot the potential dangers of the build-up of the German fleet and the increasing rivalry between British and German vessels for domination of the transatlantic routes. He campaigned for more investment in the navy. He studied the German Navy to understand their strengths and how they could be dealt with.

At the outbreak of the Great War he was favoured by Winston Churchill (then First Lord of the Admiralty) and was hastily promoted to the position of Commander of the Grand (Home) Fleet. He commanded the British Fleet faultlessly at the largest-ever battle of big ships of war at the Battle of Jutland in 1916.

A strategist and a tactician, Jellicoe had a much deeper knowledge of ships and naval warfare than most other commanders of his generation, which did not always make him popular. He was not interested in politics, which he left to Winston Churchill rather than choosing to influence people himself. This meant that his fate was tied up with Churchill's. When Churchill fell from favour in 1917, Jellicoe was soon replaced by Sir David Beatty. However his reward at the end of the war in 1918 was a Viscountcy. He became Governor-General of New Zealand in 1920, returning to England and an Earldom in 1925. He died in 1935 at the age of seventy-five. There is a bust of him in Trafalgar Square in London.