The UK and Irish Governments' decision to decimalise the currency, switching from 240 to 100 pennies in a pound or punt, presented a big problem for shops. Every cash register had to be converted, and every assistant who operated the tills had to be retrained.

Most retailers decided to dual price items for a period of time, showing both the old and the new values, meaning that every sign in-store had to be changed twice and on-product labels also had to be replaced.

The move hit Woolworth particularly hard, as it paid the price for resisting the introduction of self-service. As a result it had four times as many tills to convert as it would have done if it had already moved to central cash desks or checkouts. Converting them took every penny of available investment and thousands of hours of staff training. 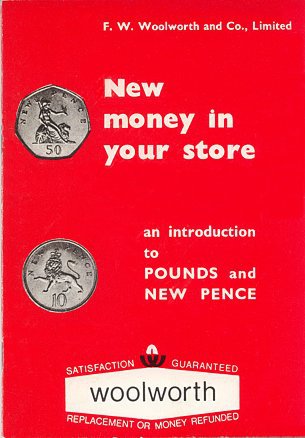 For more than five hundred years Great Britain's currency was based around twelves rather than tens. The 'duo-decimal' currency, consisted of pounds, shillings and pence. There were twelve pennies (abbreviated to "D" for Denarii, the Latin name for penny) in a shilling, and twenty shillings in a pound, meaning that there were 240 old pennies in a pound.

Most other countries had currencies centred around tens - dollars and cents in the USA, francs and centimes in France - but Britain and its Empire worked in twelves. The old currency even got three mentions in the fascias of the early stores.

In the 1960s one-by-one Commonwealth countries started to decimalise. Australia began the process in 1966, followed by New Zealand in 1967 and Jamaica in 1969. In 1970 even the renegade Smith regime, which had lost its access to coins and notes manufactured in the UK after UDI, took Rhodesia decimal. The British Government opted for an extended consultation and changeover period, declaring its intent on 1 March 1966, and finalising its plans in February 1968 for a switchover to pounds and pence three years later on 15 February 1971. Banks were closed for the four days up to 'D' Day. 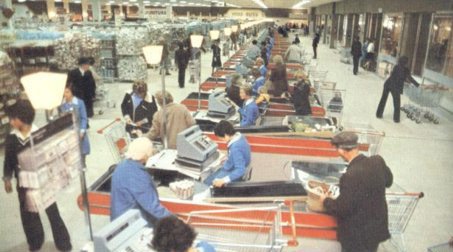 This heralded the most expensive change that Woolworth UK had faced. Unlike its rivals, it had not mitigated the impact of decimalisation by embracing self-service.

When the change was announced, 975 out of 1,075 stores still had tills at every counter. There were 20,000 registers, operated by 60,000 members of staff. Conversion cost £200 per till, with each employee needing three hours training.

This prompted a re-think, and led to an initiative to convert every store to self-service, and to complete as many as possible before 'D day'.

Self-service would tackle the number of registers and reduce the number of till operators, but left a problem with product pricing. More than 20,000 stamping machines had to be replaced. The chain chose a model which could show both the old and new prices. Every item carried two prices for a full year from August 1970. 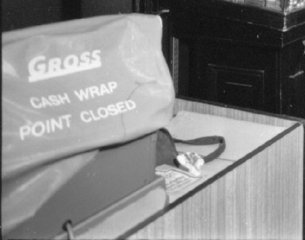 In total records show that Woolworth spent £5 million on decimalisation. It opted to convert every remaining store to self-service, leasing new tills to allow the work to be phased over four years from 1970 to 1973. Natural wastage allowed the workforce to be reduced without redundancies. The salesfloors were relayed with minimal investment in new fixtures.

Despite an annual turnover of £320m, at the time Woolworth made an annual profit of £18m. After paying dividends of £13m (as required by the American parent company, which was the majority shareholder), this left only £5m of discretionary capital expenditure each year. To fund other projects the Board had to tackle a longstanding issue, closing underperforming stores. 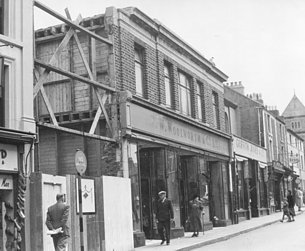 Analysis revealed twenty-five stores were loss-making, while ten more stood on valuable freehold sites within easy walking distance of another branch. For years the Company had claimed that "only Mr Hitler had ever closed a British Woolworth store" and had absorbed the losses.

Executives concluded that it would be wrong invest further money for decimalisation into these stores, accentuating the losses. Instead the freeholds or leasehold interest were sold, with the proceeds transferred to reserves. A special effort was made to find alternative work nearby for any employee who wanted it, and a generous severance package as an alternative.

By 'D' Day more than half of the 1,075 stores had converted to self-service. The number of cash registers in the remaining personal service stores was reduced to minimise the cost of decimalisation work. After the big day the pace of conversion was reduced, with 100 stores completed each year from 1971 to 1975. Overall the move to self-service took twenty years, starting in Chobham, Surrey in 1956 and finishing in Stone, Staffordshire in 1975. 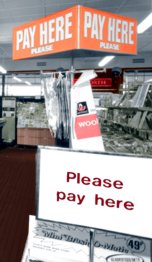 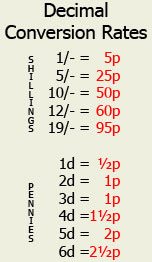 Decimalisation took the lion's share of investment capital in the early 1970s. At the worst possible time, when funds were tight, a major fire destroyed the national Distribution Centre in Castleton, Rochdale, hitting sales and profit. Debt rose as a result, and competitors were quick to take advantage of the stumble. New initiatives would be required to get the High Street giant back on track.

The actual conversion to decimal currency was flawless. The Project Manager was rewarded with Directorships. The morning after 'D Day', on 16 February 1971, The Times carried a Woolworth story. A photo showed Lord Fiske, Chair of the Decimal Currency Board, making the first 'new money' purchase in The Strand, WC2, beside Administration Director J.C. Williams and Project Manager Peter Nicholls, (who had made his name taking Woolworth to Jamaica in 1954). Lord Fiske observed "the girls certainly knew what they were doing!" 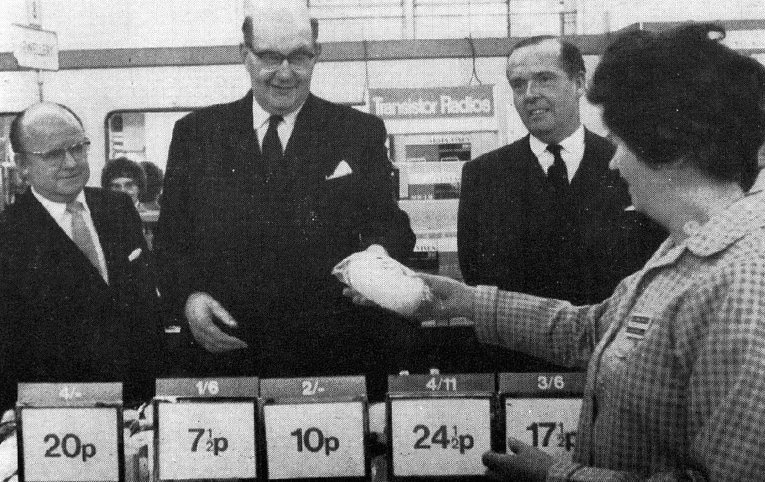