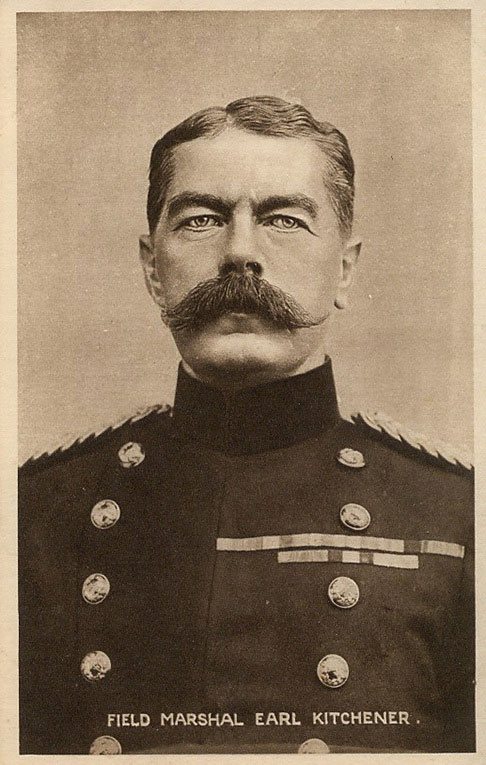 As famous for his work for peace as his fighting of wars, Kitchener was a statesman as well as a general. He
rebuilt mosques and reformed the poor laws in Sudan, rescuing charity monies and using them to relieve suffering.
In Khartoum he restrained evanglical Christians from forcibly converting Muslims, and later as Commander-in-Chief of
British Forces in India from 1902-1909 he rejuvenated and reorganised the Indian Army.

In 1914 Prime Minister Herbert Asquith appointed Kitchener Secretary of State for War. Upon taking up office, contrary to the views of Asquith's cabinet and perceived wisdom at the time , he correctly predicted that the task of defeating Germany would take at least three years and would cost millions of lives. He was also concerned at whether when victory was finally achieved the politicians could be trusted to strike an equitable peace that prevented further wars in the future. (This was driven by the fact that politicians had rejected the Treaty he had negotiated to end the Boer War in 1902, which in turn led to three more years of guerilla warfare and a great deal of further bloodshed before hostilities finally ended.)

Kitchener famously appears in the "Your Country Needs You" recruitment poster that became an icon of the war and is
credited with persuading three million men to enlist for war service. Despite his own preference to invade at Alexandretta (away from the congested Western Front) in the end he was persuaded to support Winston Churchill's disastrous Gallipoli campaign in 1915-16.

Kitchener was killed along with most of the crew of HMS Hampshire when the vessel hit a mine on 9th June 1916.