Having established a northern powerhouse, with stores west to east from Liverpool to Middlesbrough, executives turned their attentions to London, hoping to match the spectacular sales achieved by the parent company in most of the major shopping streets of New York City.

A presence in the British capital would boost the new-born company's reputation with suppliers, and bring the threepenny and sixpenny offer to the world's largest city. It would also impress the boys back home! 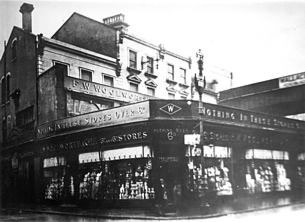 By the Autumn of 1910 Woolworth's had opened stores in a line across Northern England. The focus turned to the London metropolitan area. The goal was to follow the US pattern, where there were 5 & 10¢s in every major shopping street in New York City. The Founder's long term goal was a branch in Oxford Street, W1, which would show his countryman, Gordon Henry Selfridge, how a store should be. But first he wanted to master the suburbs.

Brixton was the starting point. It was an affluent suburb about three miles south of the Houses of Parliament. The area was famous for its large villas, society ladies and modern shops. A site opening into Brixton Road and Atlantic Road, under the London, Dover and Chatham Railway was chosen.

The store opened on 10 December 1910, and proved a hit. The prominent position attracted shoppers from the street market and commuters heading to London by train, tram and bus. Later its success inspired a much larger purpose-built store, which opened when the original twenty-five year lease expired. Overnight business was transferred along the parade past the railway. That iconic art deco store proved a particular favourite with shoppers. Woolworth Brixton endured into a hundredth year of trading, before its parent company collapsed into administration, finally vanishing in January 2009.

Ironically, despite the original premises being lost in World War II, the 21st Century tenant of the original site is Footlocker, the modern trading identity of the founding F. W. Woolworth Co.

In 1911 two further stores opened in London. The first was at the south-eastern fringe in Hare Street, Woolwich. Local heavy industry supplying ordnance to the Woolwich Arsenal made it ideal. Weeks later another opened to the north of London in High Street, Harlesden. After a slow start, this outlet had built such a large clientele by the 1930s that its footprint was doubled. Years later in the 1980s the premises were split to accommodate sister company Superdrug, before Woolworth withdrew when the lease expired in the nineties.

The location in North End, Croydon was chosen by Frank Woolworth himself. He visited and shortlisted the town before deciding to establish the company. He noted that the South East London location was "fine, progressive and bustling". The doors opened on 4 May 1912 to popular acclaim. The original building was repeatedly extended and adapted to suit changing trading conditions. The Woolworth store served Croydon as one of the most popular stores throughout the twentieth century, finally closing its doors at the end of 2008 when the chain folded in the credit crunch. Croydon features extensively in the Woolworths Museum, thanks in part to the professionalism and dedication of staff in the Local Studies Unit of Croydon Central Library.

The picture below shows the team at Croydon just before the store opened one morning in 1912. Unlike the Liverpool store views, which were commissioned by Frank Woolworth and focus on elegant 'tidy' items like china and glass, the Croydon image shows a young business starting out. As you might expect from a chain of twelve shops dotted around the country, no two product signs are in the same format and no two store colleague are in the same uniform. Even the "any article on this counter" sign has been adapted from its regular 3D to just one penny (no doubt in honour of Marks and Spencer just a few doors along North End). But already the Mahogany counters, the glass dividers and the golden NCR 324 cash register, complete with the Woolworth unique top sign "NOTICE! Money must be REGISTERED Before Goods Are Wrapped", had become established as the company standard. 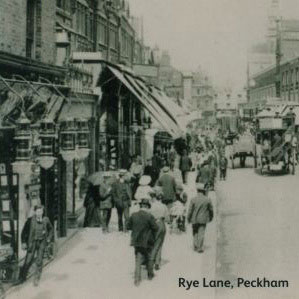 On 13 July 1912 a further south London store opened in Rye Lane, Peckham, about fifty yards across from the fashionable Jones and Higgins Department Store. The chain traded in Rye Lane for the next 96 years, switching to the other side of the road as part of a Sixties redevelopment scheme.

In the autumn of the same year further stores were added in High Road, Ilford, High Street, Lewisham and Broadway, Wimbledon as the pace of openings was accelerated. By the outbreak of the Great War there were also Woolworth stores in Wood Green, Edgware Road, Clapham Junction, Hammersmith, Cricklewood and Kingston-upon-Thames. Overall a quarter of the chain's first stores were in the London metropolitan area, prompting the Board to relocate the headquarters from Liverpool to new premises rented from the Crown at Victory House, Kingsway, just off The Strand in Central London.