For many years the British Woolworth company treated Church Street, Liverpool as its spiritual home, calling it 'Store One'. It was the success of that branch on the corner of Church Street and Williamson Street which provided the foundation for everything that followed.

From the outset, despite its two entrances and three salesfloors, they had struggled to cope with the sheer volume of custom. After years of fruitless search for a way to expand the Church Street premises, the Company was able to step in and take the place of top people's store Harrods in a City-sponsored scheme to build a new Anglican Cathedral in Hope Street, freeing up the large site of the Pro-Cathedral opposite their existing store.

Woolworth promised a store like no other - architect designed, no expense spared, large enough to cope with their planned expansion over the years, and providing additional shop units that they would sublet to other retailers. The premises would be dedicated to the memory of Frank W. Woolworth, the 5 & 10¢ pioneer who had chosen Liverpool as the home of his British venture.

After seeing the Architect's Drawings. the City of Liverpool approved the scheme, granting Woolworth a 999 year lease to run until the year 2922 on the site at an annual fixed rent of £4,920. Work started at once. The magnificent new building opened just a year later.

On this page we celebrate One Liverpool ... or as it is known today Liverpool One. 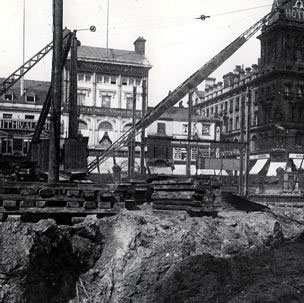 Woolworth's had opened its first British store in Liverpool in November 1909. It had been a hit from the start. The three floors were always packed with customers, leading to famoulsy long queues. Despite their efforts no-one had found a way to extend the existing building. Then, in 1921, news broke that Harrods, the top London retailer, had been in secret talks with the City Fathers about a scheme to demolish the City's Pro-Cathedral, the Church of St. Peter, Liverpool, and replace it with a huge Department Store. At the eleventh hour they had pulled out. The Woolworth Board leapt at the chance to step in.

The in-house Chief Architect, William Priddle, was unleashed on the project. He liked a challenge and devised a spectacular and larger-than-life scheme. He promised a building like no other, large enough to be a fitting head store for the High Street retailer and its future needs, with additional prestige shop units for other retailers. The "store to be proud of" would be a Cathedral of Commerce.

Meanwhile Liverpool's Anglican Cathedral would be a grand affair. The new building in Hope Street would reflect the City's commercial success and prosperity. Between 1700 and 1900 the North-Western seaport had seen spectacular growth. Its docks sent Cotton goods from the mills of Lancashire around the world, imported raw materials for the industry of the north, and had established themselves as the home of the premier passenger liner crossing to New York. Liverpool challenged Dublin for the title 'the second city of the Empire'.

Most of the City's public buildings had been replaced, thanks to the generosity of local merchants, but somehow St Peter's had been forgotten. Liverpool had risen so fast that a Church had been designated a 'Pro Cathedral', without being as large or grand as those in other Northern Cities. Unusually it was sited in a busy and noisy shopping street. The Diocese had worked with City Fathers to plan a new cathedral, and their advisers had brought Harrods into the scheme. 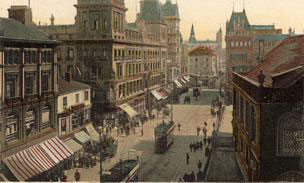 With Harrods out of the picture, Woolworth stepped in. Its Chief Architect, William Priddle, developed designs for a huge 3D and 6D Store at the centre of a block of retail properties, securing Montague Burton, (the "Tailor of Taste") and C&A Modes as tenants and neighbours for FWW. He promised a "finely appointed building", and committed to demolish the Cathedral, clear the site and oversee every aspect of the construction with the least possible disruption to other traders.

The proposal was accepted. Work started in Autumn 1922. 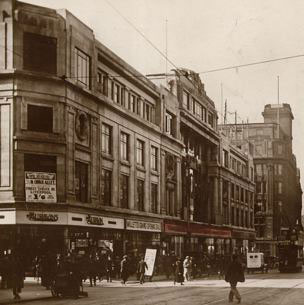 Priddle future-proofed his design, including extra space for future expansion. The first floor and basement were built as shells and mothballed. The approach followed a pattern from the USA, where the major 5 & 10¢s had expanded over time. Executives approved a substantial budget befitting the national flagship store, using profits from the wider chain, which had grown to 140 branches.

The groundwork was completed by the end of 1922. The foundations were laid in January 1923, as shown above (top). In the Spring cranes hauled a superstructure of girders into place; this created the outline of the building. Through the Summer armies of bricklayers and stone masons then added the outer shell around the beams. As soon as the masonry was one-storey tall carpenters began the fit-out, using the finest mahogany floors and panelling. Their work was completed in record time. By 4 August the sales area was picture perfect and ready to open. 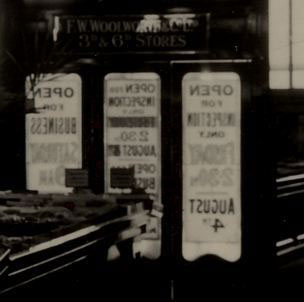 In keeping with a longstanding company tradition, the store opened for an "inspection only preview" on Friday afternoon, just as its predecessor over opposite had done fourteen years earlier. Trading began in earnest the following morning. The new store looked spectacular. Even with only the ground salesfloor in use it had doubled in size. What was more customers could see right across the store, unlike the previous 'L' shaped salesfloor.

The pictures below are interactive - click on a product or area of one of the pictures to open a close-up view. There are several different angles and enlargements to choose between. 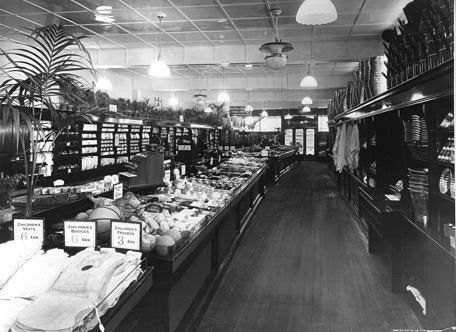