GE (General Electric) still supplied light bulbs in 2008 over 110 years after Thomas Edison first signed as a supplier in the USA.

The Anglo Swiss Company (Nestlé) sold chocolate bars to the company from the first day in Liverpool in 1909 until the last day in the High Street - a total of 99 years and 62 days.

Product Development in the Twenties 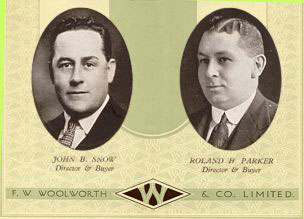 John B. Snow (nicknamed "Surefire") was recruited to the British company by Frank and Fred Woolworth. He had previously worked for Fred in New York and had learned about Buying from Carson Peck, who headed the stateside Buying Team. He arranged the opening ceremony at Fishergate, Preston which went on to serve the Lancashire City for ninety-nine years, and was the first Manager of the firm's Northern District before taking up the role as Buying Superintendent in 1913. He worked alongside a senior British Buyer, Roland H. Parker, for twenty-five years. 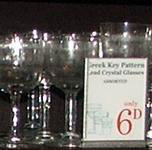 By 1920 Woolworth UK already had a strong base of indigenous suppliers, backed up by overseas sources for luxuries and novelties. The firm encouraged its partners to innovate. They were prepared to pay a little extra for wholly new lines to help the factories to recoup their set up costs. The move helped to keep the store range up-to-date and also ensured plentiful supplies of the best sellers.

Most of the products stocked in the stores at the time were practical things for use around the home, but there were also novelties and some highly decorative pieces.

Buyers were expected to visit supplier factories regularly. By understanding the production process for their goods and the key cost drivers they were able to use their expertise to identify ways of improving efficiency.

We opened the pack of tin spoons (above) to photograph them and were surprised to find that they were still bright and shiny ninety years after they were put in the box. The firm sold a million packs during the 1920s at threepence (1¼p) per pack. In the January sale of 2008 a rather sturdier pack of full size teaspoons sold for 58p. Adjusted for inflation the price had gone down since the glory days and the quality had gone up. 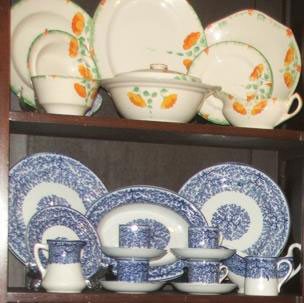 China and glasswares originally sold by Woolworth in the Twenties still appears on the occasional dinner table across the UK as well as in private collections. The pieces can be identified by the backstamps "Ivory England" (top) and "Royal Crown Woolworth" or "Fibre Pattern" bottom. The smaller pieces were originally threepence (1¼p), while the larger items like the vegetable dish were just sixpence (2½p).

During the 1920s Buyers and Suppliers worked together to develop layout guidelines for key product ranges. The goal was to improve the consistency of presentation across the chain at a time when it was growing rapidly. In this way it was hoped that all of the branches would show off their threepenny and sixpenny lines to maximum advantage. In the twenty-first century the practice is common among retailers. It is called planogramming and is usually done in a sophisticated set of virtual reality and modelling programmes on a PC. Major retailers send the documents to their store electronically. But in the Twenties the displays were set up on counters until the Buyer and Supplier were satisfied with the layout; then a photographer or an artist was called to take a slow exposure picture of the range or to produce a line drawing. The finished insructions were typewritten, duplicated and distributed to the stores by post. 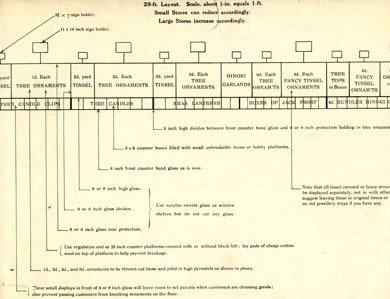 In the 1920s most suppliers considered obtaining a Woolworth order to be a major coup. The firm's partners were guaranteed a regular income and reliable payment, which was often made in advance. So long as a partner delivered on time and produced goods of consistent quality, the firm promised to try out any item that they produced which could be sold at a profit for sixpence or less. The firm's mass-market appeal meant that if a new line was a success the vendor could quickly start to sell tens of thousands every week.