By 1986 the turnaround at Woolworth Holdings appeared to be going well. B&Q was expanding rapidly, and F.W. Woolworth was looking brighter and tidier, appearing to be on the mend.

But Stanley Kalmns, the respected leader of the UK market-leading electrical and photo business, Dixons, believed it was an illusion.

The rival's close examination suggested that the success of B&Q, and the recent acquisition of the Comet electrical discount chain, were obscuring the under-performance of the main High Street chain, which was being stripped of its assets at an alarming rate.

Kalms believed that he could do better, and launched a hostile takeover bid. A bitter battle was to follow, which left both parties battered and bruised. It forced the fastest and most successful changes that Woolworth had ever seen.

Woolworth Holdings faces a challenge from the Curry's owner

Lukewarm investor feedback to the new Cornerstone Strategy at Woolworths led to changes at the top, with the appointment of new Directors drawn from across the industry. Mair Barnes from the House of Fraser took over as Commercial Director, alongside Mike Sommers at Marketing and Chris Ash. Their challenge was to establish a turnaround formula that could match the exponential growth of sister company B&Q. 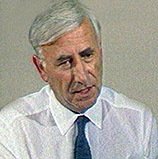 Before the ink on their new strategy could dry, it was put to a stern test when Stanley Kalms, the Chairman and MD of Dixons Stores Group launched a £1.8bn hostile takeover bid for Woolworth Holdings. The campaign was managed by his young Finance Director, Gerald Corbett. The ensuing weeks witnessed one of the roughest and toughest takeover battles of the era.

Kalms claimed that his rival was managed by accountants who were boosting profit through asset disposals rather than tackling the retailproposition, particularly at Woolworth. He believed the chain needed his unrivalled retail knowledge to get back on top.

The battle centred firmly on the High Street stores. Kalms accepted Britain's anti-monopoly laws would probably force him to sell the Comet subsidiary, and described sales and profit progress at B&Q as "acceptable".

Woolworth lambasted Kalms for mis-managing previous acquisitions. It argued that Weston Pharmaceuticals, Barclay Fine Chemicals, Dixons Rinck, Barclay & Sons, Ascotts and ACE had all underperformed, and proved it was untrue that Kalms had never closed a store. While Kalms considered market conditions to be difficult "difficult", they had absorbed Superdrug quickly and profits were rocketing, in marked contrast to Westons. 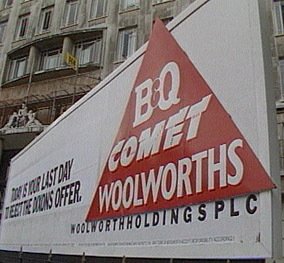 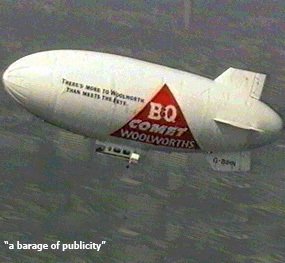 A barage of anti-Dixons publicity declared their offer "inadequate". The poster campaign extended to a huge sign on the forecourt at Marylebone Road counting down the days left to reject the bid.

Just in case Fund Managers in the Square Mile had missed the message, Mulcahy even sent an airship to buzz their rooftops with his message of defiance. 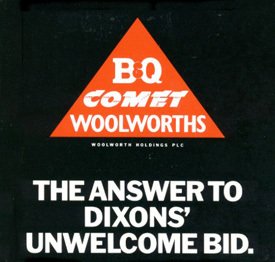 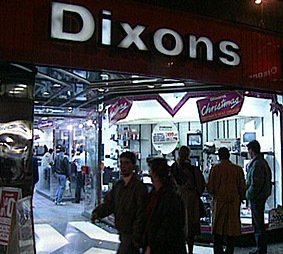 A defence document was issued to shareholders, setting out the early success of a new strategy at Woolworths called 'Focus'. Pilot stores, it claimed, were showing big increases in both sales and profit, with the store environment transformed and upgraded. There were similar successes in both B&Q and Comet. 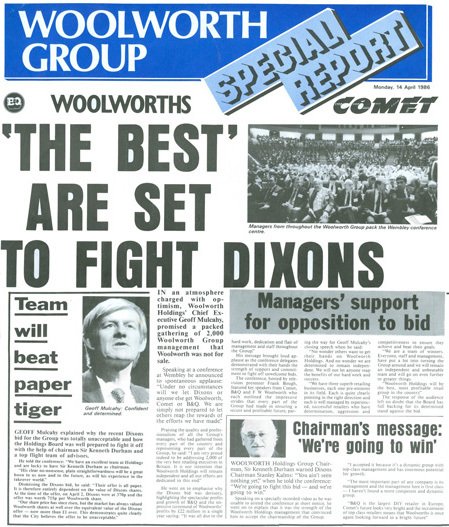 The pièce de resistance of the campaign took place on 11 April 1986, when 2,000 Woolworth, Comet and B&Q Managers gathered at the Wembley Conference Centre, with every TV network invited.

In the speech of his life, Geoff Mulcahy declared "We are the independent, unbeatable team. Dixons say we have no retail experience - 30,000 years’ experience that is what we have in the room today. That loyalty, that total commitment to our strategy, that is what Stanley will find he’s fighting against, and that is why investors should reject this inadequate and misconceived offer." Viewers of the evening news saw the huge audience spontaneously rise and applaud for over ten minutes.

For reinforcement, both ITV and Channel Four carried carefully-crafted advert showing the new-look Woolworths for the first time. City Regulations prevented any mention of the bid-battle, but they still packed quite a punch.

Investors chose to give Woolworth the benefit of the doubt. Kalms had failed to secure the votes required. Three years later, Kingfisher turned the tables in a tit-for-tat bid. Despite obtaining shareholder approval, it was rejected by the Monopolies and Mergers Commission .

By way of an epilogue, fifteen years later three former Dixons Men took the helm of the demerged Woolworths Group. The Chairman, Gerald Corbett, CEO Trevor Bish-Jones and Operations Director Steve Lewis had all worked for Kalms. And, after seven years of their leadership, the stores vanished from the High Street. The Group had amassed debts of over £300m.