The Paternoster Consortium had done its homework, planning the period after the takeover meticulously before placing their bid.

Its research had shown that the chain's advisers had been highly conservative in valuing its properties, leaving considerable hidden value.

It also highlighted that B&Q had untapped potential and had been an excellent acquisition by the previous management, but that its growth would be hampered by the limited funds available to invest.

Armed with this knowledge, the new Executives carried out their plan with military precision, selling the most under-valued retail properties and dividing the proceeds between paying down the money they had borrow to buy the brand, and expanding B&Q through a combination of store openings and acquisitions. 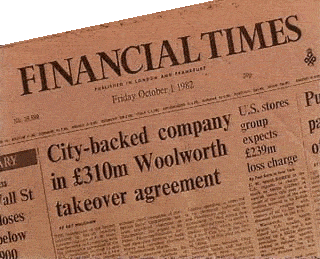 When Paternoster's takeover of F.W. Woolworth hit the news on 1 October 1982 many pundits rated it a gamble with a high likelihood of failure.

Seventeen years later in 1999, the Kingfisher Group CEO Sir Geoffrey Mulcahy, a member of the original Consortium, revealed that it had been surprised when the parent company accepted the opening bid. This had presented a big challenge.

It had been financed by Charterhouse Jaffert, securing £310m with a detailed business plan. This envisaged selling a number of freehold stores to pay down the debt, and had been meticulously planned. The ruthless execution was in marked contrast to the sentimentality of yesteryear. 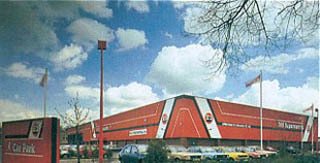 Two years earlier Woolworth had acquired B&Q, financing the move by selling two major freehold stores. The Directors had faced criticism from Store Managers who feared they had lost confidence in the variety store formula, and had reassured them that Woolworth openings would continue alongside a programme of diversification. For the first time Executives then followed the parent company, in selling and leasing back some freehold properties, to finance expansion at B&Q. 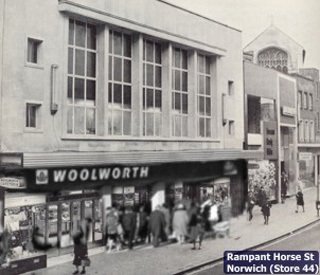 Traditionally the property portfolio had been treated as if it was held in trust for future generations. At times this had constrained investment. Rather than pursue a strategy, the Board had tried to keep everyone happy, as illustrated by this internal article from 1982, headed "Spreading the money around":

"Where we have a highly successful store in a city centre, we will continue to spend money on refurbishment. Norwich is a good example of that. The same applies to Woolco, as is evidenced by what is happening in Bournemouth." ... "Managers are concerned about the upkeep of their stores but the fact is that we are doing more refurbishments in 1982 than we did last year." .... "The current thinking is perhaps to spread the money round a bit more. This is likely to be achieved by planning less expensive refurbishments, conversions and extensions, and by being flexible about the types of store where they may be carried out" .... "Perhaps in the future the analysis might be more clearly based on profit potential." 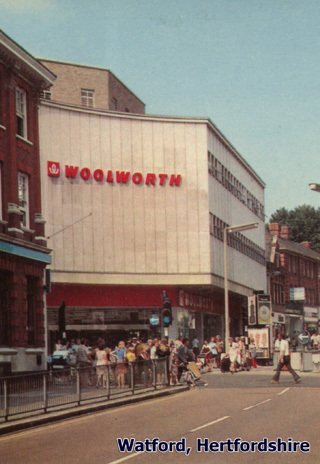 This caution meant that the new owners inherited a remarkable property portfolio. The largest city centre stores were freehold and had been well maintained, but were barely profitable even without paying rent. Meanwhile many of the smaller stores were more old-fashioned, yet generated the lion's share of profits.  Under the old management the firm's response to a loss-making store had often been to invest to turn it around.

Similarly, alongside their retailing duties, the former FWW Directors had become property speculators, buying up City Centre properties adjacent to their largest stores, and devising major redevelopment schemes to echo a success that they had enjoyed in the 1960s in Birmingham's Bull Ring. As a result the firm owned all but one of the properties in the block adjacent to the store in Wilton Road, Victoria, SW1 for example. It had been a salutary lesson in planning laws, with many obstacles confounding the scheme.

Rather than give up and sell these property portfolios, the previous Board had decided to persevere, opting to raise capital by selling a handful of stores. They had put the word out that offers might be considered. Their process was unstructured and it was clear that the Executives did not understand the full value of the portfolio or how it could be leveraged to give the chain new momentum.

The new management was hard-nosed. Initially it halted the disposals while a new process was shaped, based on the difference between each building's book value and a market valuation. Documents that have surfaced about the takeover period show that Paternoster had determined that there was hidden value and had built a plan around this. 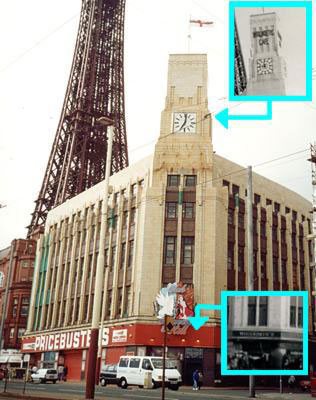 A revised list of disposals was quickly put into place. Without the sentiment of earlier times it included the closure of a number of iconic stores, several of which had recently been updated and modernised.

At the time long-serving Woolworth Managers were bitter at what they saw as the systematic asset-stripping of their busines. The problem was accentuated by repeated assurances from the new owners that each wave of disposals would be the last. But, taking an external perspective, most academics credit Paternoster as a case study. The new owners delivered billions of pounds of new value for investors from a fading asset, and created Kingfisher Group out of the embers of Woolworth.

The hard reality is that many of the City Centre stores no longer made a profit, even without paying rent. Many of the freehold properties that they occupied were worth millions, making an appalling return on the capital employed. Paternoster swapped loss-making City Centre Woolworth stores and freeholds for a highly profitable chain of B&Qs. In doing so they completed the strategy envisaged by the previous Chairman, Geoffrey Rodgers, with more focus than he could have achieved in the old structure. Woolworth assets also funded the acquisition of the big-name electrical retailer Comet, and the Superdrug Health and Beauty Empire, which was later doubled in size. The moves built the parent company, which was re-branded 'Kingfisher', to a point where it had the momentum and the cash reserves to expand organically into Europe and around the world. This was achieved by giving the Woolworth property base a radical shake up.

Of all of the closures and disposals, the decision to leave the Irish Republic was the most controversial. The chain had enjoyed considerable success in the Emerald Isle and was a going concern with a strong following in the Country and a dedicated workforce. The move, which was excused on the grounds of simplification, came as a bolt from the blue and led to acrimonious strikes and vilification in the Irish press. The management held their ground, offering generous severance terms and, where possible, making arrangements for managers to transfer to stores on the mainland or in Ulster.

By 1989 the wider Group had more stores, with 1,300 Woolworths and Superdrugs in the High Street (a rise of 200 over the decade) and a dominant position out-of-town at B&Q and Comet. The remaining Woolworths stores had a new trading formula which generated enough profit to pay full market rentals for the buildings and still to return a surplus far in excess of that achieved by the previous management in the late 1970s.

The amateur property speculation of the old Board had made way for a dedicated and well-respected property company. Woolworth Properties Ltd had become 'Chartwell Land' and had begun to turn a number of former superstores into large shopping centres. During the 1990s as these schemes came to fruition, they provided purpose-built new premises to allow Woolworths branches to re-open in some of the towns abandonned shortly after the takeover.