Woolworth distinguished itself by recovering from World War II more quickly than its competitors.

Its Buyers found cunning ways of working around Government austerity measures to keep the counters filled. In Britain they drew on the ideas from their counterparts in New York, adding a few tricks of their own to keep the offer fresh.

It is hard to imagine today that when the simple ball point pen first appeared on the shelves in the late 1940s, customers queued to hand over ninepence (3.75p) to have a 'little miracle' biro of their own.

Although quite tame by modern standards the biro was just the first of many changes in The Forties and Fifties, as television brought new innovations to compete with simple pursuits like stamp collecting and letter-writing.

Victory in the World War came at a high price. Britain had taken on large debts in the early years, when America had provided munitions on credit. From 1945 the loans had to be repaid in instalments. As a result there was a major export drive, and retailers faced controls intended to reserve as many British-made finished goods as possible for sale abroad and to prevent merchandise from being brought in from overseas. These austerity measures left the displays in other retailers looking drab and depleted, while a new generation of Woolworth Buyers rose to the challenge, particularly in improving the firm's selection of Stationery, Cards and Books. 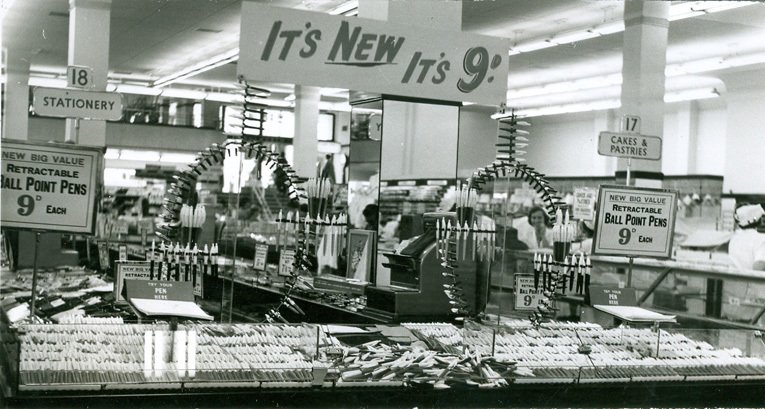 Drawing ideas from the American parent company, the Buyers introduced lots of new products in the late 1940s, including colourful comics (to build on the success of Mighty Midgets during World War II), and brighter and more modern designs of Greetings Cards. But the biggest innovation was the Ball Point Pen. The Biro, which sold for ninepence (about 3.75p or 15¢), was described as 'space age technology'. The bodies were made from plastic, a new wonder material which was taking the place of bakelite. Signs encouraged shoppers to try the pens out. There were scribble pads on the counters, where signs boasted that the biros could write at any angle, even upside-down. The word spread quickly, within three years every store carried a wide selection of ball point pens which had grown to account for almost half the department's total sales.

Abandonning their traditional reserve, even company bosses embraced the biros after noticing how much easier it was to read forms that a few wayward stores had submitted to the office completed in ink rather than the pencils they were instructed to use. The users explained that as well as being easier to write with, the ball point pens also produced much sharper carbon copies. Some Store Managers continued to use their fountain pens, which had become a status symbol, and disliked the instruction that stock counts should be written in ink. For years they had 'corrected' any values they didn't like with an Indian rubber! 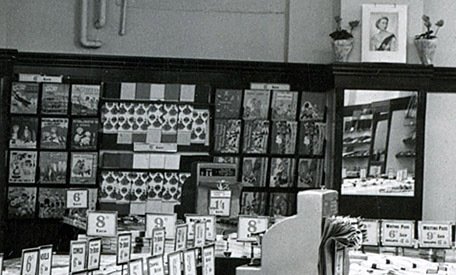 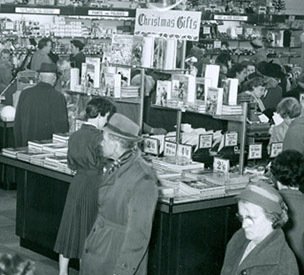 The range of books was also given a makeover. As people installed television sets they seemed to become more aspirational. Many added stylish touches around their homes and became interested in how other people lived. The launch of Britain's first commerical television station on 22 September 1955, known as 'ITA', may have been behind this. It boosted demand for illustrated books, particularly those with attractive full-page colour photographs. These 'coffee table books' ate into the space which he traditionally been reserved for Penguin paperbacks, particularly at Christmas. By the late 1950s only commuter stores near large train stations and branches at the seaside carried large displays of paperback novels, as the rest of the chain carved out space for illustrated cookery books, 'how-to' manuals for a generation who had just discovered DIY, and a wide selection of Annuals at Christmas. One kids series enjoyed year-round success. Bright yellow Rupert the Bear  books, inspired by a cartoon strip in the Daily Express , caught the imagination of a generation of youngsters, and were given pride of place.

Displays had to be adapted, as it became clear that shoppers liked to stand and browse, obstructing those trying to pass their purchases to the assistants behind the personal service counters. So new walk-around 'feature tables' were placed adjacent to the main book counter to house the display.

The launch of the British Commonwealth lay behind a surprise hit range, as it inspired a craze for stamp collecting. The Buyer was able to respond quickly with pre-packed pocket-money assortments drawn from around the globe. Prices ranged from sixpence (2½p) to a shilling (5p) a pack. They were sold by Country or Continent, alongside a selection of albums, gummed corners, magnifying glasses and tweezers. Exotic triangular stamps featuring brightly-colour wild animals and tropical scenes, became must-haves. For a while store staff wondered what their younger customers were doing when they stood shaking the packs. The action shuffled the contents, revealing any of the prized collectables that lay inside in the small cellophane window on the front of the envelope-style container.

No craze lasts forever. After selling millions of stamps in the 1950s, sales began to dwindle in the mid-1960s. In 1971 the range was withdrawn and its space was re-allocated to the new nirvana, simple electronic games. The world, it was a-changing.