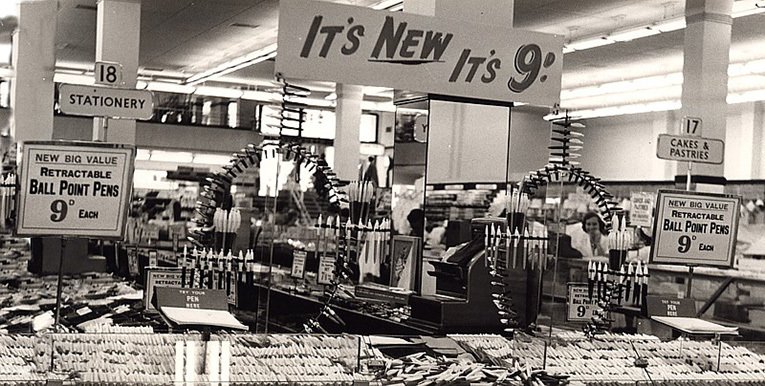 We take them completely for granted today, but back in 1949 a cheap retractable ball point pen was absolutely brand new. Woolworth's sold millions of them in the first few weeks after the launch at a bargain price of 9d (3¾p) each

For more than forty years Woolworth stores had displayed Greeting Cards on flat table top counters, where they stood between glass dividers. The layout was transformed in all stores soon after the firm started to experiment with self-service. A new fixture was designed for the superstore at Cornmarket, Oxford, which used tiered shelving on a special gondola counter that came to be known as a card rack. Sales rocketed. The idea was later extended right across the store estate. Most received the new look a number of years before the rest of the store converted to self-service.

Each Christmas saw extended displays of hardbook books, which were a popular gift. Most were sold for five shillings (25p) or less. These were displayed on table tops and, where possible, customers were given plenty of space to browse and make a selection.

The picture shows the layout of the Pontypool store in Gwent (Monmouthshire), Wales in 1953. Most shoppers are wearing and hats and coats. At the time many people 'dressed up' to go out shopping. 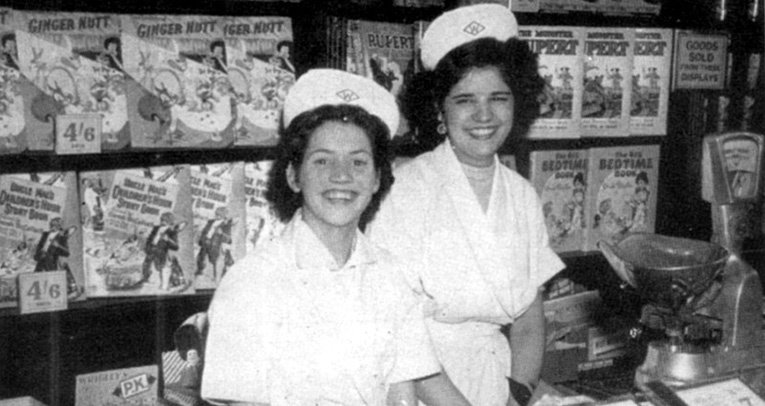 Another regular Fifties Christmas stocking filler was an Annual or Picture Book. Woolworth stores obliged with a wide selection. The top seller was the Rupert Annual, which was published by the Daily Express and was sold exclusively in the High Street stores.

In Erith, Kent these were displayed right behind the pic'n'mix sweet counter. Many lucky local children received a book and a quarter (125g) of gobstoppers that season!