In 1950 staff served customers individually on the Woolworth household counter, as they did throughout the store. Products were typically displayed on tabletops between glass dividers. The post-war range was basic - soap powder and cleaning products, enamel saucepans and early plastic buckets and bowls in sombre colours. Several of today's brand names, including Dreft, Lux and Persil are clearly visible.

Glass strips split the counter top into a series of compartments. Each contained a different product. The counter was on a single level. Customers chose items and then presented them to an assistant behind the counter for wrapping and payment. It was a tried and tested formula that had sustained Woolworths (and other retailers) throughout the century - but its days were numbered, as retailers sought ways to reduce the high overhead costs of personal service. 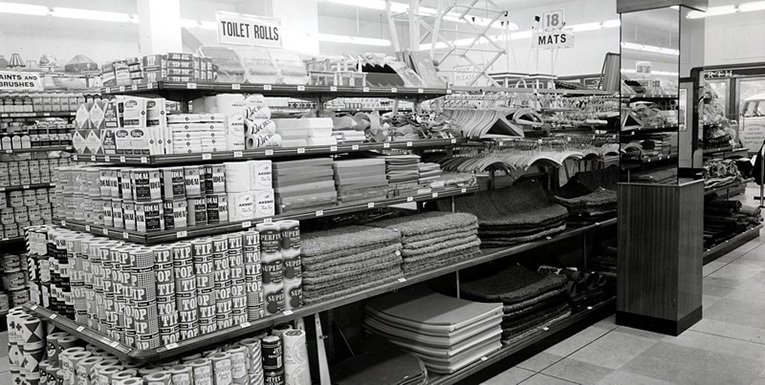 The Portsmouth store was opened in stages from 1950 to 1953. During this time the company began to experiment with different display techniques. As a result each time the store was extended the fixtures were adapted to incorporate the latest thinking.

In place of the single height personal service island counter, new "gondolas" were installed with tiered shelving, allowing several layers of shopping in the same bay. This allowed the stores to stock a wider range and to introduce bulkier products. The best of the new lines were squeezed into the stores that had not been modernised by bolting extension bars onto the existing personal service counters.

The same basic approach is still employed by retailers across the world in the twenty-first century. 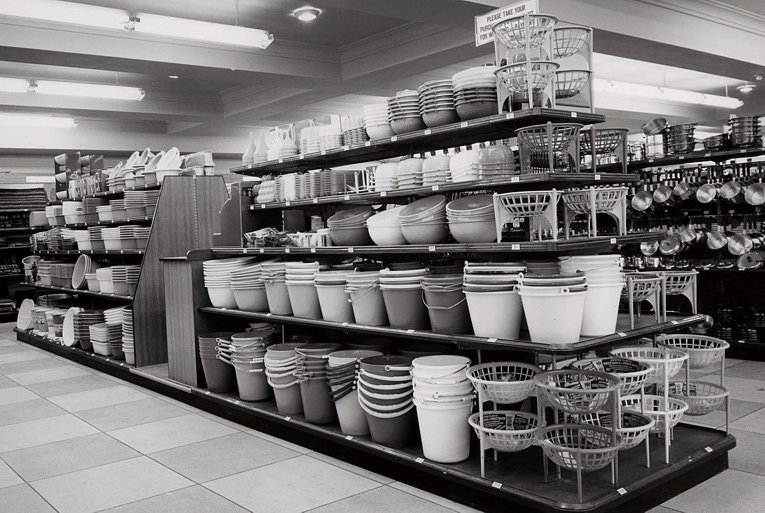 The new multi-tiered counters allowed more products to be offered for sale. For the first time customers were invited to browse and make their own selections, rather than asking an assistant for help. But, as the picture shows, the company stopped short of switching to a fully self-service operation, which they considered unnecessary, instead including cash registers in the middle of each gondola island. 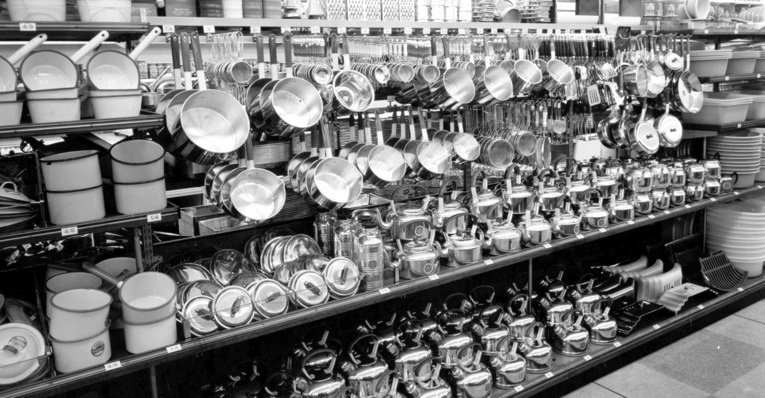 The range of saucepans illustrates the speed of product development in the 1950s. Enamel models had been popular lines since 1909. Before the war the chain had also offered lightweight tin saucepans, but their popularity had faded. Between 1950 and 1953 the Buyer pioneered new brushed aluminium designs. By 1954 these outsold all of the other designs by a ratio of three to one. They were lighter, more energy efficient and easier to clean. What was more they were cheap to make and offered a good margin despite a budget price.