Before World War II Woolworth introduced a range of tinned fruit and cream, adding tinned meat, fish and even whale meat during the Battle of Britain. But it was only in the late 1940s that they considered introducing a wider food offer and started to experiment with the new American idea of a supermarket operation.

During the 1950s most large Woolworth stores introduced a grocery island, with goods displayed between glass dividers on the counter tops with stacks of special offer products at each end. The Company was more radical in a handful of City Centre stores, where they experimented with self-service displays on the walls. Time-pressed City workers appreciated the speed of service that could be achieved through the new approach, while shoppers in the suburbs preferred the personal service of the traditional layout.

The prototype for a self-service food operation was introduced into the flagship store in The Strand in London in 1951. Customers were invited to serve themselves and take their purchase to one of the two tills for payment.

An edited, cheaper version of the design exhibited at the Strand was included in many of the stores opened in the 1950s, as illustrated by Walsgrave Road, Coventry, Warwickshire.

Company bosses stepped up the pace in 1957, extending the range of food and pushing for a full self-service operation for the range where space allowed it to be allocated a distinct area of the salesfloor. The refurbished and enlarged store at Above Bar, Southampton, Hampshire included not only fresh fruit and vegetables, but (visible in the distance), purpose-built new melamine fixtures, shaped like flat-irons, which were designed for self-service grocery shopping. The results were very positive.

To mark the company's Golden Jubilee Food Halls were added to a number of large existing stores and incorporated into the superstore format for new outlets. The pictures below show the Food Hall in the Briggate, Leeds store, which moved to huge, purpose-built premises in 1959. The Food Hall included fridges for chilled food and, for the first time, a selection of frozen food.

During the 1960s the Board failed to capitalise on the new ideas, dithering about the role of food within the overall offer when they met with resistance from the American parent company. Their reticence was in marked contrast to the dynamic transformation achieved by the copycat company, Woolworths Australia who laid the foundations which later made them one of the foremost supermarket chains down-under in the twenty-first century.

Identical supermarkets were opened in Gloucester and Kings Heath, Birmingham in 1959, with a very similar design in Guildford, Surrey too. 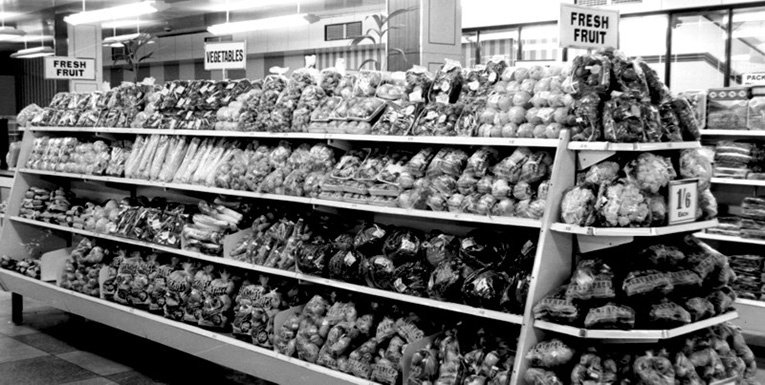